What is Crohn’s disease?

It is known as Crohn’s disease a chronic inflammation of the intestine with the appearance of frequent or continuous intermittent episodes of diarrhea alternating with possible periods of constipation.

Inflammation, which may appear anywhere in the digestive tract, tends to focus on the junction between the small intestine and the thick intestine, area known as ileus.

It can affect the entire thickness of the intestinal wall which usually produces strong ulceration and, in some cases, the obstruction of it. In addition, the disease can affect other organs like the bladder.

It is a disease that usually appears between 15 and 35 years of age.

Unlike ulcerative colitis, it has a discontinuous extension, that’s to say, between affected segments, some areas can be healthy. 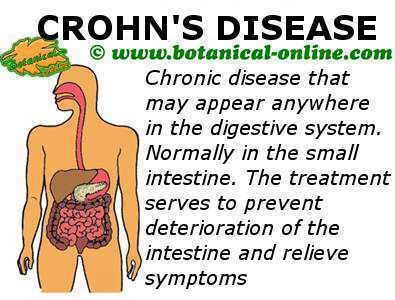 No one knows exactly what causes can produce it but several possible causes have been suggested, that according to most specialists, are a consequence and not a cause of this disease. Among them, we would mention:

Diagnostics and treatment of Crohn’s disease

Crohn’s disease requires immediate treatment by the doctor to prevent a deterioration of the disease that can lead to other more serious processes such as intestinal obstruction articular inflammation, fistulas, festering boils, eye problems, cirrhosis, vitamin deficiencies, etc..

If you have any symptoms that may suggest the presence of this disease, call your doctor immediately to make the proper diagnosis (blood tests, stool tests, x-rays or colonoscopy)

Conventional treatment of Crohn’s disease involves the administration of a number of drugs that reduce inflammation, prevent attacks and avoid the infection of the ulcers.

In some cases it may require hospitalization and even the use of surgery for the removal of part of the intestine where occlusion has occurred. In this case, unlike what happens with ulcerative colitis, surgery does not cure the disease.

How to avoid Crohn’s disease?

The natural treatment of Crohn’s disease involves the use of a series of natural resources that are able to prevent or alleviate it.

More information on the natural treatment of ulcerous colitis.