What is basal metabolism?

The amount of energy consumed by a person at rest is known as basal metabolism. It is the energy that we needed so that our vital constants (our brain, our heart, etc) can work in an involuntary way and the organism can maintain a constant temperature.

The energy we consume is measured in calories. Calories measure the energy that provides nourishment to the body. There are foods that are much caloric than others. For example, 100 g of almonds provide 560 calories, which is ten times more than the same amount of fresh pear, which provides only 56 calories.

Depending on how we “burn”calories, we can define the basal metabolism as:

The basal metabolic rate tends to depend on genetic factors. Heredity determines in most cases the type of metabolism of each person. However, there are a number of factors that can affect metabolism, such as:

How to calculate the calories we spend?

In practice, a basal metabolism calculator is the most appropriate instrument to learn how many calories our body uses at rest. (Open calorie calculator) 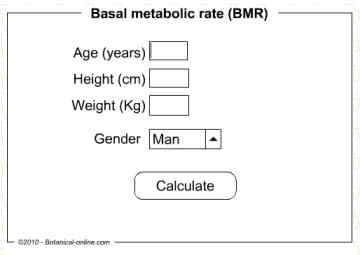 More information on the metabolism.