Habitat: Native from Middle East, formed by hybridization of wild species. It can be found in many places of the world and sometimes naturalized

Deciduous tree of the Rose family – Rosaceae – up to 15 m. Greyish trunk and pubescent young branches. Leaves ovate – elliptic, dentate, white velvety below till 15 cm long. White or pink flowers till 5 cm. The fruit (apple) is a pome, more than 5 cm wide, very variable in colour according to the varieties.

Picking- up and storing apple trees

Flowers should be harvested when they begin to bloom and mature. They should be dried in the shade and kept in a well- closed container. apples should be stored in a dry and shady place.

– Pectine: It operates like a soluble fiber, aiding in the dissolution of the cholesterol and being a good weapon against the diabetes.

– Amino acids: Cysteine(Component of body tissues. It eliminates toxins of the liver); glycine (natural antiacid and responsible for the immune system) arginine (Very necessary for the muscular growth and tissue repairing; responsible, together with the glycine of the immune system), histidine(vasodilator and stimulator of the gastric juice. It fights the anemia, arthritis and is very useful for the ulcers), Isoleucine(Necessary for a suitable growth and the balance of nitrogen), Lysine (It takes part in the production of antibodies, the construction of weaves and the absorption of calcium), Serine (it aids to fortify the immune system) Valine(It favours the infantile growth and it takes part in the balance of nitrogen), methionine (necessary for the production of the cysteine, it aids to fight the cholesterol) Glutaminic acid (antiulcerous, tonic, it increases the mental capacity)

– Sorbitol: A good aid in the internal problems 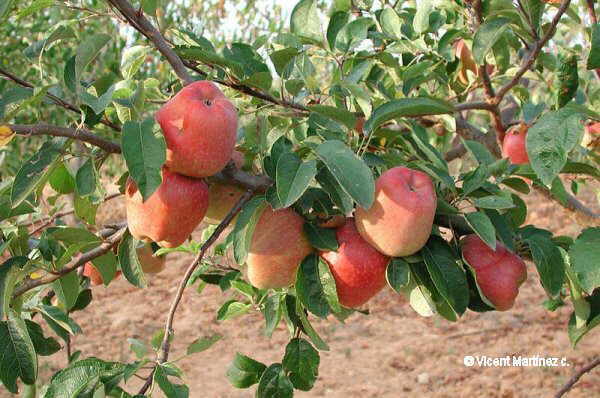 – Anti-inflammatory of the digestive tract: In case of inflammation of stomach, intestines or of the urinary canals. (Decoctión of pieces of apple during 15 minutes in a liter of water. Take three glasses every day)

– Anti-acid: Its content in pectins, as well as the influence of the glycine, that is a natural antiacid makes it very suitable to stop stomach acidity. It is enough to eat some apple pieces and we will immediately notice a great lightening, thus a continuous ingestion becomes a good substitute of other chemical products. Very useful for gastritis diet, hiatal hernia or in case of nausea or vomiting diet.

– Antidiarrheal and soft laxative: Although it seems contradictory its high content in pectins turn it into a good regulator of the intestinal tract, so a soft laxative in cases of constipation, specially when we eat it early in the morning.

At the same time the absorbent value of the pectins makes ideal in cases of colitis, diarrhoea, gastroenteritis and in all those cases in that a too abundant and soft defecación is produced.

– Anti flatulence: The pectin contained in apples is a good regulator of the intestine. Promotes expulsion of stool and prevents waste decomposition responsible for intestinal flatulence. (Eat apples abundantly) The apple cider vinegar helps prevent intestinal gas formation (Mix two teaspoons of apple cider vinegar with two teaspoons of honey in a glass of water. Sip it after meals)

– Diuretic and depurative:It favors the elimination of corporal liquids, being very suitable in case of obesity and rheumatic diseases. By its content in cysteine and arginine, as well as the malic acid, it is very appropriate to eliminate the toxins that are stored in the body and that, besides fighting or preventing the diseases previously mentioned, should be recommended in affections like uric acid, gout, arthritis, urticaria, and for the treatment of kidney related diseases, such as kidney stones or kidney failure.

– Anticatarrh: In case of bronchitis or cough, as well as loaded chest, the plant contains expectorant values (Infusion of 15gr.of dry flowers by liter of water. Take three glasses a day)

– Anticholesterol: Methionine and a high content in phosphorus is fundamental to keep cholesterol under control.

– Anti-cancer: Because of the presence of antioxidans components, it protect the digestive system from cancer.

– Hipotensive: The vasodilatador value of the histidine makes it a good ally to reduce blood pressure in case of hypertension. (Infusion of a teaspoon of dry flowers and leaves. Let it rest 10 minutes and drink two glasses a day)

– Sedative: Because of its phosphorus content, it is a food with sedative values, very adapted to take it before going to sleep, which aids to sleep better.

– Febrifuge: In order to reduce fever (Decoction of 60 gr. by liter of water during 15 minutes. Strain and take 2 glasses a day)

– Hearing loss: Apple vinegar has very beneficial properties to the health of the ear because it is rich in potassium magnesium, zinc and manganese. Being deficient in one of these minerals can cause deafness. Apple also moisturizes and regenerates the mucous membranes so it can aid to combat the problems of the inner ear due to excessive dryness.

It is also very rich in vitamin A with antioxidant effects well suited to prevent the action of free radicals that can facilitate hearing sclerosis. (Mix a Tsp cider vinegar with a spoonful of honey per cup of water. Take three glasses a day during the three main meals. If you notice heartburn, lower the dose)

To treat Meniere’s disease mix two teaspoonfuls of apple cider vinegar in a glass of water. Drink a couple of glasses a day divided into the two main meals for a month.

– Hay fever: Apple cider vinegar is used to stop the production of mucus. (4 tablespoons per cup three times daily for 3 or 4 days. Then gradually reduce to zero, little by little.)

– Quit smoking: Cure on apples can help make tobacco smoke not pleasant (Eat only a couple of kilos of apples for two or three days)

– Skin sagging: Apple juice is used for massaging flaccid areas (Mix half a cup of apple juice with half a glass of melon juice. Massage the soft tissues.

– Rosacea: Wash the face before going to sleep with a tablespoon of apple cider vinegar diluted in a glass of water.

– Food odor: Dilute half a litter of apple vinegar in a bowl of water. Take foot baths. Rinse with cold water and dry your feet well

– Hematomas: Mix a quarter cup of vinegar in a liter of hot water. Wet a towel with this liquid and apply on the affected area for 15 minutes several times each day.

Apple is an excellent fruit that, due to its basic character, we can believe it to be the only one that can be eaten with any type of food and at any hour of the day, without producing nourishing incompatibilities. Apart from eating it crude, cooked (single or combined with other foods), some other well-known products are produced from it such as:

– Cider : Liquid with a slightly alcoholic content (8 º as maximum) which is obtained from the fermentation of the squashed apple pulp into a wooden container during 7 or 8 days. the resulting liquid must be introduced in another container during a pair of moths, and finally stored in glass bottles that must be stored in a cold and obscure place. It is a good remedy against the thirst and conserves most of the properties of the apple, although, because of its alcohol content, one should drink it with care.

– Apple syrup: A type of jam becoming from boiling during a couple of hours the apple juice till it acquires the consistency of honey. Then it must be sterilized, using the technique of Bain-Marie, resulting a very nutritious ” marmalade ” with the presence of so many sugars, mainly fructose.

– Apple jelly:: It is done by a similar process, but in this case the whole peeled apple must be boiled, instead of the juice.

The main nutritional values of apple for 100 gr. are the following.

– Cosmetics: Because of its astringent properties, apple has been used from ancient times to produce face masks, with the purpose of eliminating impurities and reaffirming the skin

Apple lacks toxicity, with the exception of the ingestion of its seeds that, as it happens in all the rose family members contain acids that, combined with the gastric juice, produce cyanide. However the ingestion of these would have to be very great and voluntary to produce a fatal result, as it seems to have happened with a man in U.S.A