How to grow cacti 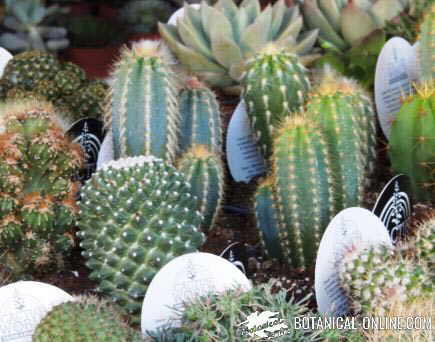 We have the following cacti types:

Besides being used as gardening plants, they are used thoroughly in the world as food for the men and livestock, to protect the lands from erosion, to fence the fields, and for their medicinal or toxic properties. For more information consult:

Cacti have very showy flowers. Bloom in plants cultivated in greenhouses can be forced during the whole year. Under natural conditions they generally flourish during the most favourable times. Flowering in some Cactaceae, as the agaves, takes place when the plant had reached a very high degree of maturity after being 10 years old or more. Most of the fruits of the Cactaceae are eatable berries, with better or worse flavour. In many cases they are consumed by men and animals.

Outdoors growing and winter average temperatures of about 7ºC make not necessary to water them, because watering can harm them more than benefit by increasing the risk of freeze. During the rest of the year watering will depend on the fact that they are cultivated in flowerpots or in the garden soil, in plastic or in earthenware pots. Plastic ones should be watered every 12 days in spring and every 10 in summer. In the event of being planted in mud pots the period of watering can be extended about 3 or 4 days more. In Autumn watering should be done monthly, or one should not water at all if time becomes cold. If they are cultivated in gardens the intervals previously mentioned should be doubled, watering is not even necessary if rains take place from time to time. Indoors cultivation, either with heating or in summer, makes it necessary not to let the plant dry off completely, even in winter.

The best water for cacti is the rain water. Lime should be controlled so as not to produce stains in the surface of the plants when it is too abundant. In this case a decalcifier should be used. The best moment for watering is in the morning and the end of the day. We should avoid doing it during full sun, especially if plants have been sprayed, because drops can act as magnifying glasses and solar rays may produce burns on the surface of the plants.

With very hot weather a cactus likes to be sprayed every 15 days, which, for the reasons mentioned previously,should be made when the sun is not to strong, being the sunset the best moment of the day.

If cacti are watered too much or if pots don’t have drainage enough, these plants have a usual tendency to rot as consequence of the fungi attack that can affect the roots and stems. For this reason an exaggerated watering should be avoided and we should mainly watch over that pots should have a good drainage. We should never leave them submerged.

Cacti planted in indoor pots need enough light, so it is necessary to place them near a point of light, like a window or gallery. To get an uniform growth it is necessary to turn them around. Another way of illuminating them, especially in areas with little light, it is by means of an artificial lamp that will be lit about 17 hours between spring and autumn, and about 14 in winter. The artificial light also allows us to relocate the plants in any desired place of the house.

In this case they should have a sunny and warm exposure. If temperatures go down, they should be protected or kept indoors. When temperatures improve they can be carried outside again, keeping in mind to acclimatize during some days the plant that has been protected in the house, for this reason it should not be placed in full sun to avoid burns or, if it is not possible to find it the suitable place, it is very appropriate to cover it with a piece of cloth during some days. A demi-shade emplacement or a filtered sunlight location will be the best thing to achieve.

Cacti tolerate low temperature better when they are under hibernal rest, so it is very important to maintain them dry when cold season arrives.

It should be avoided to plant the new samples next to the walls facing the South or East, because they can act as reflecting sun screens and burn them. The ideal place is a high one, with good circulation of air. Doing earth heaps to plant them on with an appropriate drainage to impede the flooding of the soil would be the best thing. Plants should not be planted too congested to favour aeration. Due to the superficiality of the roots it is not very appropriate to work the soil next to them. Just a light rake to clean it and to remove the grasses should be enough.

The best way to obtain new plants is by means of cuttings. Cuttings should dry off during some days to heal the wounds before planting them. The normal thing is to keep them in a sandy layer in a shaded and warm place about 15 days, or 30 in the case of very big samples.

Another reproduction technique is the graft that consists on putting in contact a cactus fragment on a base of another cactus piece, so as the will grow as a whole plant at the end. The superior species shows a quicker growth that the inferior one. The combination should stay about 15 days in a shady and warm place, with a temperature between 20 and 30ºC. The pieces should be joined one to another during this period of growth.

Another reproduction means is done through seeds. The plantation will be carried out from early spring until mid summer. The floor will be made up of a mixture of leaves humus and sand. With this mixtures small pots of about 6 diameter cm will be filled and placed on a layer bed. This substratum is used in order young plants to absorb the humidity by means of capillarity, reason why a constant humidity and a temperature of about between 18 and 32ºC should be maintained. The germination of the plantlets will take place in a period of 7 or 20 days. Being 3 months old the pots can already be watered.

In the event of replanting a cactus from a place to another, it is convenient to use a wide shovel to dig below the roots, without hurting them. Some very sharp and disinfected scissors will be used to remove the damaged roots.. The transplanted plant will be left in the shade during a couple of weeks to heal the cut. Once planted it won’t be watered until the plant produces new growth in the superior part of it, which will usually happen in the term of a couple of weeks or so. Since the surface of the plant facing the South and East was more adapted to the burns of the sun,, we will place the plant in the same position that it was in the original location. Although replanting can be carried out during the whole year, the best time to make it is from March to May.

In the event of replanting a cactus from a pot to other, it is convenient for the new pot to be a couple of centimeters more than the primitive one, because these plants don’t like to be too much loose. Since a cactus presents very sharp spines, we will use gloves or build a cardboard ribbon, with which we will wrap up the plant, leaving a part of the ribbon free to catch it. When we lift the plant of the old pot, we will take advantage to liberate the roots of those parts that are in not well state without damaging the rest of the roots. It is convenient to place draining material at the bottom of the pot and place the plant at the same height that it had with regard to the surface in the previous pot. Once placed in the interior, we will stuff the empty space and we will reaffirm it until the soil is well pressed. We will wait a couple of days before watering.

The best land is that one formed by a mixture of:

The preparation of an appropriate floor can serve as base for the growth of the plant during 4 o 5 years without having to add any fertilizer. On this base, to favour the growth, flour of bones, phosphates and plaster can be added. It is not inadequate to feed it with a liquid fertilizer from time to time during growth. If a solid fertilizer is provided, it should be powdered on the soil corresponding to the roots and water it superficially. An annual feeding to adapted plants at the beginning of summer can be convenient. This should be given up during autumn to prevent the vital activity of the plant that would become frozen in winter, a period when neither watering nor fertilizing should be done. The same treatment should be applied to recently transplanted plants.

Because the roots of cacti have not a very deep horizontal growth, the most appropriate pot type is that which is wide and shallow. The width of a pot limits the growth a lot, in such a way that this concludes when the roots can no longer extend any more, so, in case it should happen, we will also limit the the fertilizer.

Fungi are the main illnesses that attack these plants. When having sick plants, we will apply some fungicide to cure them. Consult any specialized shop to obtain the most appropriate product at the moment. The red cochineal (Dactylopius coccus) attacks the opuntias., so no matter how interesting it might be in the industrial production of red dye, one should get rid of it if the plant is used for gardening. Agaves are attacked by weevils whose wounds are profited by other fungi to rot the plant. As a general rule they should not be pruned or wounded. For all the cactus, in the event of presenting sick areas, the best norm is to remove the area affected to avoid the extension of the illness. Sprinkle the cut area with sulphur is a good solution to avoid the plant being attacked. The cutting tools should be disinfected with bleach diluted in water before and after each use.