Habitat: It appears as a cultivated tree in Europe, North of Africa and Asia. It seems it is a species coming from the species Pyrus nivalis and Pyrus caucasica. It was first cultivated in East Europe and West Asia.

Deciduous tree of the Rose family – Rosaceae, up to 10 m.

Grey erect trunk, with its bark breaking into stripes.

The fruit is an edible pome.

Leaves must be collected in spring and will be dried in the shade; bark must be picked-up in autumn and dried in the sun. Both must be stored in dried containers; it is advisable for the bark to place it in a air-tightened container. 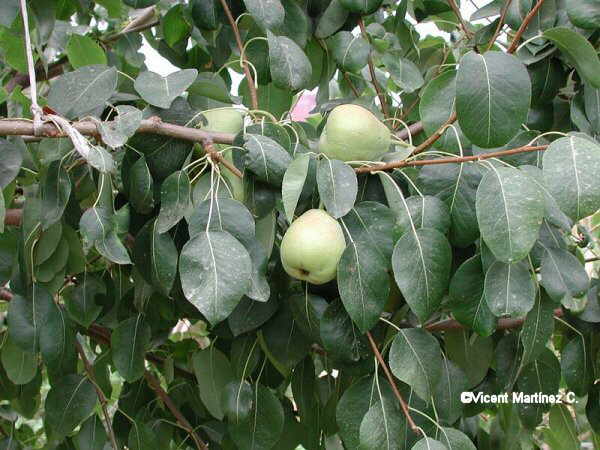 INTERNAL USE REMEDIES WITH PEAR TREE

– Diuretic: It stimulates the urine elimination, so it is suitable in those cases in that it is necessary to stimulate the kidneys to increase micturition, in illnesses such as: obesity, hypertension, dropsy (accumulation of liquids in the body with swelling of tissues), edemas, kidney pain (nefritis), kidney stones, renal inadequacy, inflammation of urinary bladder (cystitis), etc.

It has been used to treat the inflammations of the prostate (Infusion for 20 minutes of 20 gr of dry leaves for half a liter of water. Drink 2 cups a day before eating)

– Analgesic: In external use, the use of its bark in decoctions is appropriate to mitigate the pains produced by blows, twists, sprains, bruises, etc. (20 minutes decoction of 25 gr of dry bark for half liter of water. Apply the resulting liquid on the affected area.)

The fruit of the pear tree, the pear, is a very appropriate food. Very low in calories, with abundant fiber and lacking of sodium it is very interesting in the weigh loss diets, contributing with its great quantity of vitamins, among those, the folic acid, one of those that forms the complex of the vitamin B, necessary for the cellular construction and whose deficiency predisposes to the appearance of certain cancers like that of bladder.

In a same way this component is very important in the expulsion of the uric acid of the organism, so that the consumption of this fruit is very recommended for people affected by gout.

Pears for cholesterol and hypertension

In addition to removing cholesterol, can help reduce excess weight wich is often the cause of the outbreak of this illness.

The pear also contains a lot of potassium that intervenes directly, together with the calcium, in the process of bone formation, as well as the regulation of liquids in the body and the good state of the nervous system. It will be then very interesting for children to eat this fruit during growth, and also, as we grow older, for a good bony and nervous health.

In the same way it has been proved the vasodilator and anti-arrhythmic properties of this element, so by eating this fruit, we are helping the body to lower the blood pressure and to normalize the heart pulse.

Very rich in polyunsaturated acids and amino acids, essential some of them as the leucine, for the good growth in the infants or the regeneration of the tissues. Other, although they are not essential, as the arginine, have proven to be very useful in the elaboration of the muscular mass, as well as in the elimination of the ammonia of the organism. Most of they increase the immunity of the organism against the bacterial aggressions.

Pears for your stomach and intestines

It is a very digestible fruit, wealthy in sugars, although, because of their composition, they are very assimilable and perfectly suitable for diabetics. We can say that a piece contributes with about 70 gr. of sugar.

If we have gastric problems we can appeal to the boiled pears that are also very nutritious and mineralizing, although cooking destroys its vitamins.

In the event of diarrhea, its lightly astringent properties help to overcome it, being an excellent help for the treatment of the colitis. 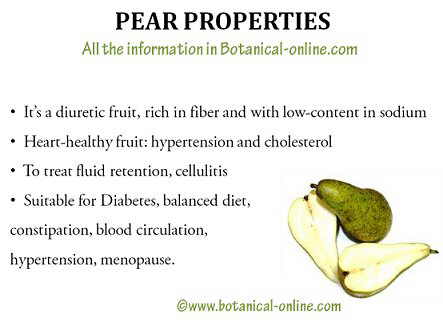 The main components of pears are:

You can eat it almost along the whole year for the great profusion of varieties at our disposal. Among all of them, we must highlight the following:

– Lemon pear: yellow and with little black spots, very sweet and aromatic, that refreshes us in July and August.

– Saint John’s pear: very exotic, tinier, with hard and very flavorful meat that reaches their fullness in the festivity of the mentioned saint and extends till the month of July.

– Beurre d’ Anjou: it can already be gathered at the beginning of February, although we can enjoy its lightly sour flavor during practically the whole winter and the whole spring, because it can stand up to 6 months in the refrigerators.

Other very recommended varieties would be the ” Erculina “, the ” Magallona ” or the “Conference “.

The pear tree, as the rest of trees belonging to the Prunus genus, such as the Cherry tree (Prunus avium), the plum tree (Prunus domestica); The apricot tree (Prunus armeniaca); the peach tree (Prunus persica); or the almond tree (Prunus dulcis) contains in its seeds, flowers and leaves the cyanogenetic glycoside amygdalin.

This compound that, in the case of the almond tree, appears with a very big proportion in the seeds of the bitter almonds it is responsible for many intoxications. Amygdalin – C6H5CHCNOC12H21O10. – because of the action of the ferment emulsin, in contact with the saliva, becomes hydrocyanic acid, (cyanide) a very potent poison.

In a same way, cases of intoxications have been detected in animals, especially pigs that have eaten seeds, flowers or leaves of these plants.

The intoxication symptoms are the following ones: Suffocation, bad breath, vomiting, sickness, increase of the heart rhythm, respiratory failure and death.