Habitat: Cultivated long time ago like a textile plant and for its seeds. Today it can be found like a naturalized plant in some dry places, rich in organic waste.

– Laxative: The seeds, once dry, are known as linseed. These, used internally, are very useful for their laxative properties to treat constipation, either eating them raw, blended with abundant water (about 1 to 3 daily spoonfuls a couple of times to the day together with at least 8 glasses of water a day), or by means of cold infusions (A spoonful for a cup of water. A couple of cups a day). Taking this remedy can be a good way to prevent diverticulosis.

Contrary to most of the laxatives that usually irritate the intestine, the protective action of the mucilages make this plant a non aggressive one for the intestine, although the effects are not as quick as in other products and we will have to wait two or three days to achieve the expected results. 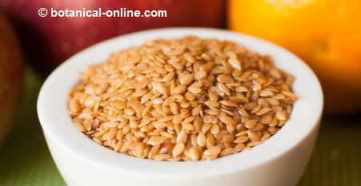 Flaxseeds are rich in fiber

It is also very useful for its mucolytic properties by helping to eliminate the secretions that take place in the respiratory tract as consequence of cold, bronchitis, pharyngitis, etc.

– Heart and blood vessel protector: The richness in alpha-linoleic acid and other fatty unsaturated acids of linseed protects our heart, avoiding “angina pectoris“, by preventing arteriosclerosis, diminishing cholesterol and blood clots (Eat bread or other meals that contain the seeds of this plant)

– Anti-cancer: The ingestion of foods that include these fatty acids helps to prevent the appearance of tumors in the chest and in the skin. Also there is much research about the possibility that phytoestrogenic lignans may be effective in the cancer decrease because of their antioxidant, antiestrogenic and antitumoral properties.

– Alzheimer disease: It is suspected that the lack of fatty acids could be one of the triggers of Alzheimer’s. Analysis in patients with this disease show low levels of fatty acids. Supplement intake of essential fatty acids omega-3 and omega-6 could improve the evolution of the disease (Take it according to the patient’s leaflet). 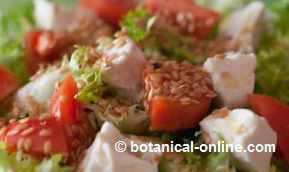 Flaxseeds added in a salad

External use of Flaxseed

In external use, one takes advantage of its demulcent properties (it softens and protects the irritated parts of the skin) It also has emollient properties (It softens the skin, forming a layer on it that impedes the evaporation of water).

So, we can elaborate cataplasms with the flour of the seeds that will be suitable for the treatment of skin affections, as eczemas, swellings produced by blows or twists, maturation of furuncles, scars, etc. (This is carried out stirring the flour with very hot water which will produce a thick dough. This is put in a gauze and applied on the affected area)

In external use, it is a very good demulcent (Softener and protector of irritations) At night, for 20 days, place a drop of oil of this plant in the patient with cataracts (Honey has also been traditionally used for the same basic goal by means of placing at the end of the bad eye a drop of honey for a couple of months)

Gargles with cold infusions of seeds during 9 hours are useful to combat sore throat. (Make gargles with this preparation)

To treat bronchitis externally make a poultice of linseed flour. 50 g. Of flour per cup of water. Place the dough on cloth and place it on the chest.

With the infusion of 10 gr. of seeds for a liter of water can be carried out vaginal rinsings for the treatment of the inflammations of the uterus (metritis) The same preparation can be used to carry out enemas to reduce swelling of the rectum.

Flax has been cultivated from the antiquity for the extraction of fibers and oil. Flax oil is used fundamentally in the industry of paintings and varnishes by its capacity of quick drying, because it forms a protective layer on the painted surfaces against environmental factors.

We use it to protect wood, iron or other exposed materials. This same oil enters as one of the main components in the production of the linoleum, a type of waterproof product that is used to cover floors.

Fiber is obtained from the stem. The process can be carried out industrial or manually. In the last case, the plant is cut and exposed to the environmental conditions so that the natural fermentation decomposes it and allows to separate the vegetable fiber from other refuse.

With this fiber, after some different manual processes, a natural thread is elaborated that is used for the production of a cloth similar to cotton, although stronger, smoother and as fresh and absorbent as this.

As a textile fiber, flax began to be cultivated about 5,000 years ago. It was very important in the Egyptian empire, where mummies were buried with linen cloths. Later on, the Romans extended its cultivation. It was most used during industrialization.

Later on, the discovery of synthetic fibers and the predominance of cotton cultivation relegated it to a second term.

Can flaxseed be poisonous?

Yes it can. Linamarin, as a result of the action of linase enzyme, produces cyanogenetic glycosides. To avoid them it is advised to eat the seeds whole or to carry out cold infusions or to boil them at least during 10 minutes. Big quantities of this plant should not be ingested. Many investigators consider that the quantity of glycosides that can be liberated is not big enough as to be toxic (More information)