Malaria is a disease caused by parasites of the genus Plasmodium that is transmitted through the bite of infected Anopheles mosquitoes.

It is also known with other names, such as blackwater fever, tertian malaria, quartan malaria, plasmodium, biduoterian fever or falciparum malaria.

Malaria is a serious and important disease that can cause the death of the infected patient if not treated.

Approximately 2% of infected people die each year (about two million people). These values ​​represent a death every 15 seconds.

Whom does malaria affect to?

It affects hundreds of millions of people in the world.

It is estimated that every year between 300 and 500 million people are infected by this disease.

Most of those affected with malaria are children.

Malaria is a type of parasitic disease mainly characterized by the presence of a number of symptoms such as:

How is malaria transmitted?

These mosquitoes can bite some people, causing them this disease. Mosquitoes transmit it through their saliva.

There are other less common forms of transmission of malaria. It can also be passed from an infected mother to the fetus. Some people get infected through blood transfusions with infected blood.

How does malaria take place?

Once the infection has taken place, malaria parasites (sporozoites) are fixed in the liver. In the liver, they become merozoites which are dumped into the bloodstream.

Whenever this breakage occurs, the infected patient has the proper symptoms of the disease

Parasites that cause infection belong to the family Plasmodidae and the genus Plasmodium. There are several subtypes, classes and nearly 200 species, five of which infect humans causing malaria.

Species that can transmit malaria

The five species that can infect us are: 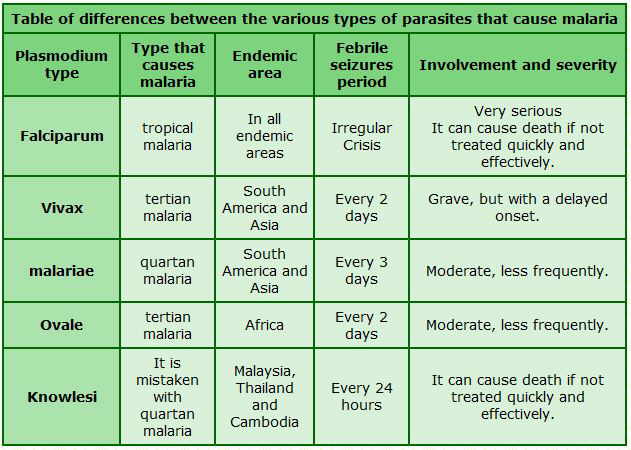 The infection caused by Plasmodium falciparum is the most serious of all, since it is the one that affects more number of red blood cells. Also, once symptoms appear, it is capable of causing death within hours, unless the right treatment is provided quickly.

The infection caused by Plasmodium vivax, however, shows its symptoms much later. They may take several months to appear.

Plasmodium malariae and Plasmodium ovale appear less frequently. In parts of Malaysia and parts of south-east Asia, another type, called Plasmodium knowlesi, has also been ranked

Where is malaria more important?

Typically, these mosquitoes live in areas where the climate is hot and humid, that’s to say, in tropical or subtropical areas and especially in the less developed countries, such as parts of Africa (especially in sub-Saharan Africa), South and central America, South Asia, parts of the Middle East, Oceania, etc..

The emergence of this disease in developed areas is usually due to infection by people travelling from the original areas. Although, every day there is an increased risk of involvement, malaria represents no great problem to heal because developed countries have more medical resources.

Furthermore, although the infection may occur in temperate countries because the mosquito can live in good times, the mosquito dies when weather becomes colder, so it can not transmit malaria. This is the reason why, malaria can not become an epidemic disease in these countries.

In contrast, the aforementioned countries, without many medical resources, are suffering a chronic anemia, yet more complications arise, since drugs hitherto used to cure this disease are no longer effective as they were initially.

This happens because some parasites that carry malaria have developed a resilience to these drugs. They are resistant to them and do not die when people apply insecticides to kill them. In turn, if that was not enough, the mosquitoes, that once were infected, can not only spread malaria from person to person through their bite, but the have also generated a specific resistance to certain types of insecticides used so far to counteract and eliminate them.

How can malaria be diagnosed?

If you have traveled to areas where there is high risk of exposure to malaria, and symptoms of malaria occur, it is recommended to seek for medical assistance in order to dismiss it, because the symptoms of malaria can be confused with those of flu.

Malaria can be diagnosed with an analysis of the patient’s red blood cells under a microscope (you can see they are parasitized), although it is possible that, your have to repeat the analysis after two or three days in order to verify the complete cycle of the parasite.

Some symptoms, such as chronic anemia, hepatomegaly, jaundice or splenomegaly, for example, can also be taken into account since they are symptoms that may occur when the disease remains untreated.

Malaria parasite is an organism much more complex than that of a virus or a bacterium, that is say, it contains much more quantity of DNA, thus complicating the production of a vaccine which may be effective against malaria infection.

Vaccines are not 100% effective and some types of parasites have developed resistance to them. In addition, they have a lot of side effects. Currently, there are some vaccines whose efficiency ranges from 40-60% in adults and 10% in children.

The WHO (World Health Organization), which has long been trying to minimize this disease, has concluded that the most effective methodology to eradicate this disease could be based on reducing the number of insects that can transmit the disease.

An example of a drug that was used until the 60’s and now is not effective against malaria is chloroquine. However, since it is very economical, it is still being used in some parts of Africa. It is true that it can improve some symptoms in people who are normally exposed to the parasite and are already infected by its bites, but chloroquine is still not being effective for new infections.

Mefloquine is another example of drug produced in the 80s, which is already beginning to develop resistance in some areas. In other areas, it is still effective, however it is related and has been attributed with adverse neurological side effects.

For these reasons, malaria medication has to be considered before being administered. Doctors should keep in mind if there is another medication without so adverse effects or if there is a better treatment. Some doctors are even pondering whether it is preferable to assess the consequences of the untreated disease.

The natural medicine for malaria is based on some medicinal remedies that can help the official treatment. They are mainly: