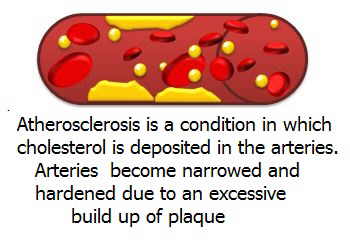 Arteriosclerosis is the loss of elasticity and the thickening of the arteries, making blood circulation more difficult.

People with arteriosclerosis are more liable to suffer heart attack, angina pectoris, strokes, an other coronary diseases, affecting nor only to blood vessels but some other arteries of the body, especially those of the legs and the brain.

The thickening of the arteries is mainly produced by the accumulation of cholesterol plaques and other waste substances that obstruct the blood passage.

Some other factors, as nicotine or alcohol, may also be responsible for this artery damage since they harm the inside walls of arteries, swelling them and making the passage narrower.

Sometimes a plaque that obstructs an artery loosens and is carried by the bloodstream to a more narrow vessel which is retained by forming a clot that clogs the blood flow (embolus). When this ” plug” is formed in a vessel watering vital organs, like the brain and the heart, it can cause a stroke or heart attack respectively.

Arteriosclerosis is also what produces intermittent claudication. This illness consists on a narrowing of the arteries of the legs, caused by atherosclerosis, that produces a deficient sanguine circulation because of the little oxygen that arrives to the muscles and, therefore legs hurt after exercise or walking, even with little effort.

This is a degenerative progressive disease which can develop through many years. Sometimes it begins in childhood and does not come apparent until the 50s or 60s. It is very important to reduce the factors that may lead to it before it damages the arteries.

Arteriosclerosis account for most of deaths in the Western World, since it is the main reason for hypertension or ictus.

Most of the time, arteriosclerosis does not show any symptoms, so the patient doesn’t know about it until it manifests itself when the disease is very advanced and the tissues that should be blood irrigated are affected by under irrigation.

The main symptoms of arteriosclerosis are: dizziness, headache, numbness, ringing in the ears, hypertension, pain in the lower extremities especially after long walks, etc.

The main causes of arteriosclerosis are:

– Age: It usually starts to appear from the 50s.

Diagnosis and treatment of arteriosclerosis

In front of any symptom that may indicate arteriosclerosis, we recommend a quick visit to the specialist who will make the proper diagnosis.

The diagnosis is generally based on different test, such as pulse testing, ophthalmoscopy or fundus of eye, auscultation of blood flow by means of an stethoscope, Doppler test, etc.). After diagnosis, the doctor will decide the best course of treatment. (Aspirin, surgery, etc.).

The natural treatment of arteriosclerosis involves using a series of natural resources that help prevent disease or reduce its symptoms.

More information about NATURAL REMEDIES FOR ARTERIOSCLEROSIS in the listing above.