What is celiac disease or gluten intolerance?

Celiac disease, sprue or gluten intolerance is a disease characterized by chronic intestinal malabsorption of gluten, which, by contact with the intestine, produces an inflammatory reaction in this part of the body, damaging it. People with this condition have a poor absorption of nutrients, thereby it affects their overall health.

Gluten appears essentially in wheat and rye and, in smaller amount, in barley and oats. This component is very suitable for the elaboration of bread by its capacity to produce a spongy and elastic dough.

Gluten is formed by the mixture of proteins gliadin and glutein with water. Some people have intolerance to gliadin, so when they ingest foods containing protein, their body reacts against it, causing this disease.

When does gluten intolerance appear?

The intolerance to the gluten can appear at any time of the life.

It mainly affects the people of European origin, in a greater proportion to women than to men. 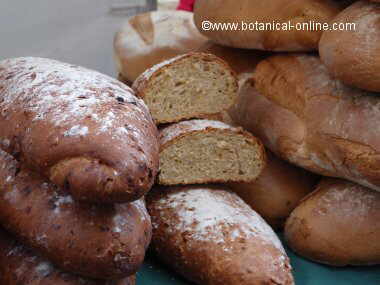 Bread is the food that contains more gluten

* Symptoms that can affect the digestive system:

*Symptoms of diseases or anomalies of other body organs, caused by the lack of nutrients and especially the bad absorption of iron, vitamin K and vitamin D:

The cause that produces the celiac disease is the intolerance to the gliadin, a protein of the gluten. The reaction that the body of the patient experiments against this substance produces an inflammation that damages the intestinal villi, which are necessary for proper absorption of food.

No one knows what causes produce this rejection of the gluten, although it has been shown that heredity plays an important role in its development. It is believed that, in addition to inheritance, other factors such as certain viruses or intestinal operations may be responsible for its outbreak.

As the exact causes of this disease are not known, there is not possible prevention.

Diagnostics and treatment of celiac disease

Early diagnosis of the disease is necessary for its adequate treatment. This diagnosis is made by analysis of feces that can demonstrate if the presence of fat is too high. Blood tests can report the presence of antibodies or low levels of minerals, especially iron.

Definitive diagnosis requires a biopsy of tissue from small intestine, particularly the jejunum, to determine if this is affected.

The treatment of this disease, once correctly diagnosed, focuses primarily on a diet of gluten-free food. This diet will usually be enough to solve the problems that cause intolerance to gluten and prevent complications such as, for example, bone problems, anemia or intestinal tumor development.

The natural treatment of celiac disease is focused on the use of a series of natural resources that can help improve the health of the sick person.

More information on the celiac disease and its natural treatment.