Chronic Obstructive Pulmonary Disease (COPD) is a chronic and irreversible condition of the respiratory system in which the bronchi become obstructed and normal breathing is impaired, preventing the flow of air into the respiratory tract.

The main cause of this disease is tobacco smoke, which affects active and passive smokers.

How do you notice you have COPD?

COPD can initially present the symptoms of chronic bronchitis: Bronchial inflammation and accumulated secretions which can produce cough with phlegm.

The secretions and inflammation reduce the diameter of the airways, causing difficulty both inhaling and exhaling. In people with COPD, breathing slows.

Because of the difficulty in expelling air, air-filled cavities can develop in the lungs, which is known as pulmonary emphysema. Emphysema decreases the respiratory capacity of the lungs, as it reduces the alveolar surface.

During the early stages of the disease, the respiratory muscles that surround the rib cage help to expand the lungs and allow for better breathing, although people may experience shortness of breath, whistling or choking when exercising or climbing stairs.

As the disease progresses, breathing difficulties are more evident, as it is a chronic disease. 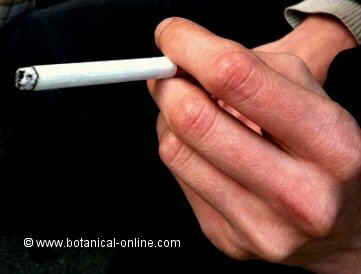 Smoking is the main cause of COPD

The symptoms of this chronic disease evolve over the years and complications can develop.

* See all symptoms of COPD disease.

The diagnosis consists of the evaluation of the symptoms (cough with or without phlegm, pulmonary auscultation, evolution, etc.).

Pulmonary capacity is measured by spirometry, which consists of measuring the lungs’ ability to inhale and exhale air.

Complementary tests such as x-rays or blood tests can be done to measure the oxygen in the blood.

Is there a cure for COPD?

There is no definitive cure for COPD, since it is a chronic disease. The treatment alleviates the symptoms and can slow down the evolution of the disease and decrease symptoms:

Among the main therapies to follow, we can consider the following: