Diabetes mellitus is a metabolic disorder consisting of excess sugar in the blood or urine.

This disease is chronic and may be due to different factors. In general, it is characterized by the deficiency of insulin secretion, and / or because it does not act correctly in the body.

Insulin is a hormone made by the pancreas that is responsible for controlling the level of glucose in the blood.

Certain conditions, such as diabetic foot, can become so severe that, in extreme cases and poorly cured, limb amputation may be necessary.

Etymology of diabetes What does the word diabetes mean?

The word diabetes refers to urinating a lot, because increased urination is one of the characteristic symptoms of this disease. Mellitus or saccharin refers to the fact that the urine is sweet, like honey, due to the presence of glucose in the urine.

Among the main causes we can mention the following:

There are two types of diabetes:

– Diabetes insipidus caused by a lack of the hormone vasopressin.

– Diabetes mellitus, caused by alterations in the metabolism of sugar. It is a disease that affects 1% of the population but more than a half are not aware of suffering it. Within this we have two varieties:

– Insulin-dependent diabetes (type I diabetes): It is a disease affecting children and youth. It has a very fast development characterized by a deficiency of insulin in the blood caused by an alteration in the pancreas.

– Non-insulin dependent diabetes (type II diabetes), It appears almost always in people older than 40.. It is characterized by an inability of cells to absorb insulin from the blood, although production by the pancreas may be normal. Its evolution is much slower than juvenile diabetes. 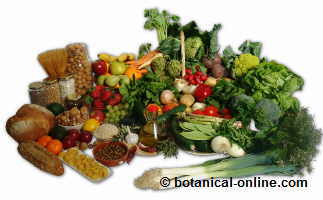 People with diabetes must control their diet and sugar intake

We may think that we have diabetes when we experience:

In the case of diabetes insipidus, the administration of the hormone vasopressin, which causes the disease, contributes to normalizing the situation, which may be reversible or irreversible.

With regard to type 1 diabetes mellitus, the use of insulin on a daily basis (also called insulin-dependent diabetes) is necessary. Also pancreas transplantation, or islet transplants that produce insulin only, may be an option.

Type 2 diabetes can be treated with oral antidiabetics and a correct diet, although the normal evolution of the disease eventually leads to insulin treatment.