Methemoglobinemia caused by nitrates in food

What is blue baby syndrome?

Blue baby syndrome is a medical term that is used to describe a cyanotic state of the skin of babies and young children (blue skin).

The causes of cyanosis can be diverse, but the most common is the ingestion of food with nitrates, which produce methemoglobinemia. 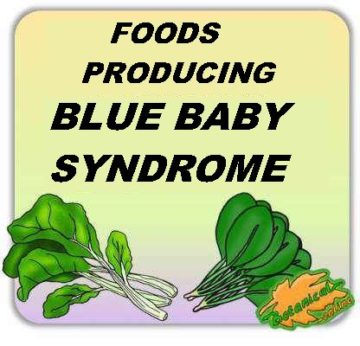 Methemoglobinemia mainly affects infants and young children due to the ingestion of a diet rich in nitrates, mainly when consuming large amounts of spinach or Swiss chard in the vegetable purees.

How is methemoglobinemia produced?

Nitrates are salts found naturally in vegetables, especially green leafy vegetables, such as spinach, chard and lettuce. These components are not toxic, but within the digestive system, part of the nitrates are converted into nitrites, which are indeed toxic.

When nitrates are ingested, part of these are converted into nitrites. Absorbed nitrites reach the bloodstream and combine with hemoglobin, converting it into methaemoglobin, which is a type of hemoglobin unable to fix oxygen and release it to tissues.

The symptoms of nitrate poisoning are due precisely to this anoxia in the tissues or  lack or decrease of oxygen in cells, organs or blood. (produced because methemoglobin does not transport oxygen):

How much vegetables can the baby eat without adverse effects?

In the first place, in no case should we forget that the purpose of babies mash  and supplementary feeding in the baby serves above all so that their  palate gets used to the new flavors. The main source of energy for the baby is breast milk, and you do not need to eat large quantities of any other food.

It is considered that the risk of poisoning is high when the baby eats more than one mashed vegetables a day, where at least half are spinach. A spinach-only vegetable cream could also produce it. A puree containing 20% ​​Swiss chard would contribute 60% of the maximum intake of nitrates.

It is for this reason that the Spanish Agency for Food Safety (AESAN) recommends delaying the introduction of vegetables containing many nitrates, such as chard and spinach in the feeding of babies up to 12 months of age

How to avoid blue baby syndrome?

The advice given to avoid this problem are:

What foods are rich in nitrates?

The presence of nitrates in plants depends on environmental factors, for example, whether the soil has been fertilized with manure or nitrates. In addition, there are certain plants that tend to accumulate nitrates.

Is the consumption of vegetables with nitrates dangerous?

In most people, the consumption of vegetables with nitrates does not pose a risk to health, quite the contrary. The ingestion of foods rich in nitrates, which are mainly vegetables, is not harmful, but totally beneficial. The only problem is found in babies and small children, with whom one should be somewhat more cautious with food.

Nutrition and dietetics for children

When to introduce the different foods to children