Home › Recipes › Stuffed eggplants properties
This article was endorsed by Elisenda Carballido - Dietitian nutritionist. Postgraduate in Phytotherapy and master in Nutrition and Metabolism.

Recipe originally taken from Turkey. It is said that the Imam fainted when she tasted such exquisite dish. However, other historians suggest that the surprise was due to the huge amount of oil that was used for the recipe.

Among the properties of the recipe, we must highlight the abundant amount of extra virgin olive oil that permeates its aromatic flavor to the dish, in addition to its health benefits.

Olive oil is a good source of Omega 9 and phenolic compounds. It is a heart-healthy oil, preventative against degenerative diseases such as Alzheimer’s, multiple sclerosis, Parkinson’s disease and senile dementia.

However, the caloric content of the recipe is important, so it is recommended to combine with low-fat foods, such as boiled grains (couscous, boiled rice) or bread.

Ideal in the diet of children, students, youth, adults and seniors. A natural pleasure to all tastes.

For people with diabetes and obesity, the recipe can be done boiling the eggplant instead of frying it, so they have less oil. 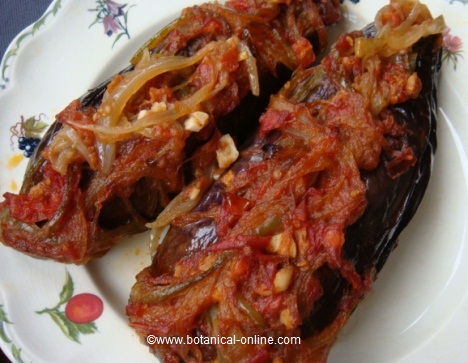 – Wash eggplants and cook them whole.

– Make a deep cut from one end to another of each eggplant, without allowing it to divide completely. Throw salt and let it release its bitterness for 10 minutes. Repeat the process in each eggplant.

– Cut the onion and cut it into half moons, very thin.

– Wash and cut the tomatoes into small cubes.

– Fry in plenty of oil over medium heat and onions, garlic and tomato, with a pinch of salt and spices, for 18-20 minutes.

– Remove from heat and set aside.

– Put the eggplants under water to remove salt and drain them.

– With the remaining oil from the sauce, fry the eggplant. Turn them several times until they are cooked for 15 minutes.

– Place the eggplants on a baking tray or earthenware ceramic, with the cut side up.

– Carefully open the eggplants and place the sauce inside.

– Add water to fill half of the eggplants.

– Remove the liquid, and serve the eggplant with fresh parsley for garnish.