– Portuguese and Galician: Pimenta do kingdom.

Habitat: tropical plant native to India, where it is estimated it was first domesticated. Piper nigrum is a species coming after its congener Piper longum.

Pepper gained great popularity in the tenth and twelfth centuries, when the Arabs opened the Spice Route between India and Europe.

Currently, pepper stands out as the most valuable species and with the biggest trade volume of cultivated species. 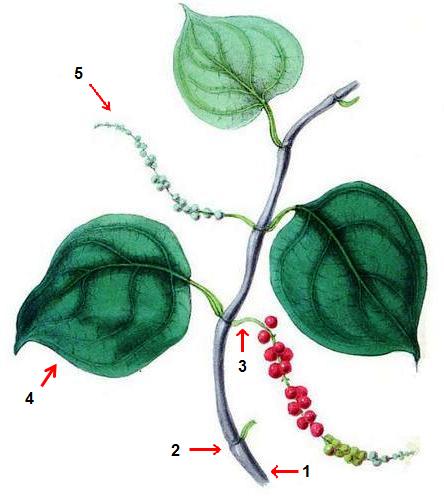 In the picture: botanical illustration of black pepper, where you can see one of the main branches of this woody plant (1), its nodes (2), from which arise the fruiting branches (3) and leaves (4). The inflorescence is a spike (5).

Black pepper (Piper nigrum) is a perennial vine that grows in tropical climates and has essential oils in leaves and seeds, giving off a strong fragrance.

This vine develops three types of gnarled stems: main stems with upright vegetative growth (1), which have knots (2) where the leaves emerge, the prop roots of the plant and the fruiting branches. Fruiting branches have a horizontal growth (3) Earthly Branches also develop adventitious roots and can become a new plant in its growth if they find a new tree to grasp at.

Pepper can reach more than 6 to 8 feet high in the wild, although cultivars do not usually exceed 4 meters.

The leaves of pepper are petiolate, simple, alternate, limbo hard, oval, leathery. They are between 8 and 24 inches long by 12.5 wide (depending on variety). Petiole length of 1.5 centimeters. The leaves are dark green on the upper, and whitish-green on the underside. Each leaf has a midrib from which two or three pairs of opposite lateral veins spring (4).

The inflorescence is a flower spike that comes from the main stem node as opposed to the leaves (5). The spike is between 3 and 15 inches long and is composed of more than 70 tiny flowers (up to 100 flowers).

Flowers are greenish yellow, arranged in a spiral along the spine. The flower opening starts from the base of the spike to the tip over a period of 7 to 8 days.

Wild pepper is a dioecious plant (flowering plants can be female or male), but cultivated varieties are bisexual (flowers with male and female organs), the latter being more productive peppers.

Pepper flowers have not perianth. They are surrounded at their base by four bracts. In its gynoecium (female organ) they have an ovary, which occupies the center of the flower, a very short style and 3-5 prominent stigmas star-shaped, white.

The androecium (male organ of the flower) is composed of 2-4 stamens of approximately 1 mm in length located on either side of the ovary. In its one end there is an anther with two pollen sacs.

Pepper is a protogynous plant: flowers develop before in the the androecium than in the gynoecium, stamens opening up 5-8 days after the stigma is receptive. Therefore, generally the plant flowers are pollinated by other flowers of the same spike by means of gravity, since the basal flowers develop before apical flowers (less influx of insects). This type is called geitonogamy pollination. The flowers are covered with a viscous liquid that favors fertilization.

Pepper fruits appear 9 months after flowering. The fruit is an oval drupe in size between 4 and 6 mm in diameter. They are green, but they become yellow to red and finally black. The fruits are sessile and they do not separe from the spkie as they mature, but fall along with the fruiting branch.

Inside each fruit there is a seed, which occupies the largest volume of the fruit. The seed is of approximate between 3 and 4 millimeters in diameter. It is cream. 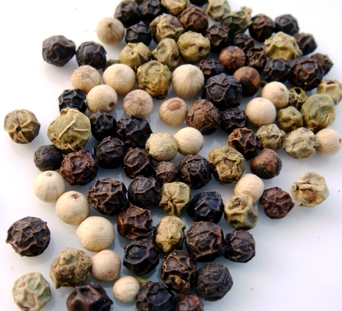