Pepper is a popular aromatic spice in the kitchen. Prized since ancient times, and even today, at the table of almost every restaurant in the world. Overall, pepper provides fragrant spicy flavor to dishes.

The word pepper is derived from Sanskrit name pippalis, meaning ‘black’ in krishna language. Pippalis was translated into Latin as Piper, and with this name it designates the genus of all Piperaceae.

The Piperaceae plants are very aromatic, because they have essential oils in the leaves and fruits. Their essential oils contain very aromatic substances, among which  piperine is the most important. It is an alkaloid responsible for the pungency of some of these spices.

However, over the years, the use of word pepper has become synonymous with spicy spice, and not all the spices that are called by this name correspond to the family of Piperaceae. 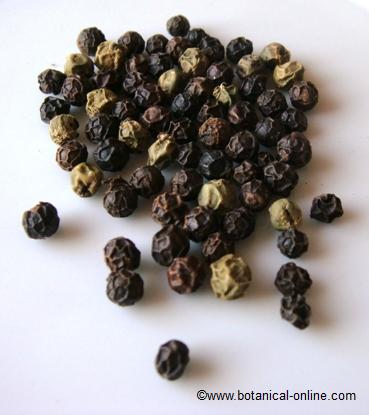 In the picture: photograph of dried fruits of black pepper (Piper nigrum).

Referred to plants of the same genus Piper:

– Black pepper (Piper nigrum). Spice, very fragrant, intensely flavored and spicy. It is the most popular spice and it is in almost everyone. Black pepper, green pepper, red pepper and white pepper come from the black peppercorns and differ only in their treatment and state of maturity.

– Cubed or tailed pepper (Piper cubeba). Plant whose fruits are quite similar to black pepper, although they are pedicellate (“with a twig or tail”). It was formerly a widely used spice, although, due to its bitter taste, it possibly fell into disuse confusing it with a shoddy pepper. It also has been attributed with medicinal properties.

– Long pepper (Piper longum). Originally from India, it is characterized by its welding fruits in fruity compact spikes. Dried and crushed are suitable for cooking. It is added to curry mixes or used as a substitute for black pepper. Congener of black pepper.

– Guinea Pepper, West African pepper (Piper guineense). Plant whose fruits are used as a substitute for black pepper, although they have less spicy flavor.

– Acuyo, Cordoncillo, Yerba Santa, Mexican pipperleaf (Piper auritum). Although it is popularly referred as pepper, the leaves of this plant are used as spice, in the kitchen of Mesoamerica, providing a nice spicy flavor.

– Kava-kava (Piper methyscum). Another plant of the genus Piper is hiding under the name Kava or kava-kava. Its aromatic compounds are highly valued as an anxiolytic for aromatherapy. It has medicinal properties, but may have toxic effects.

Other types of pepper

In many languages, the term “pepper” extends to pepper plants that do not belong to the genus Piper. This common denomination among different plant species is due to the pungent taste similar to the Piper genus plants.

The first to give these names were the colonizers of the New World, due to the similarity of the new species (of different botanical genera) with other peppers (Piper spp.) They already knew them thanks to the Spice Route trade.

Therefore, it is not surprising that most of peppers that do not belong to the genus Piper come from the American continent.

– Allspice (Pimenta dioica). Caribbean tree characterized by a strong aroma release. Its fruits are similar to black pepper in terms of shape and color, but the taste is a mixture of cinnamon, nutmeg, pepper and cloves. For this reason, its beans are called four spices or allspice. 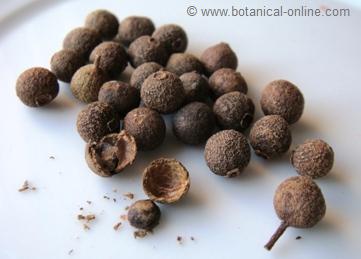 In the picture: pictures of fruits of allspice (Pimenta dioica).

– Peruvian pepper (Schinus molle). It is the fruit of a tree very common in warm areas of the planet and cities. This type of pepper has not particularly spicy flavor, but rather sweet and fruity. Consumed in excess can be toxic. 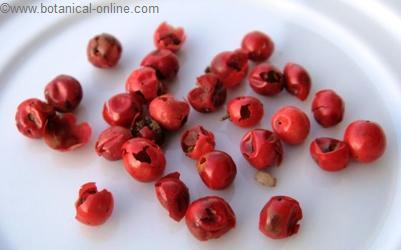 – Grain of paradise (Aframomum melegueta). Native to Africa. Allspice was also designated as Malagueta, because, when the African slaves discovered the grain of paradise in America, it reminded to allspice.

Capsicum spices owe their name “pepper” to the spicy flavor that capsaicin adds.

In the picture: pictures of fruit of cayenne pepper (Capsicum frutescens).

There are many botanical names including the term piper in Latin description of the species, as in the case of peppermint (Mentha piperita), by its characteristic spicy.