Pepper is one of the most common spices in the table of all households, and certainly well known to most readers.

However, because of its daily use, it goes unnoticed by most of the guests. The truth is that the traditional use of this spice is only a small remnant of what once meant. For many civilizations and types of medicine, pepper was considered a special exception, excellent for dishes because of its taste and digestive properties.

Ground pepper or grain pepper increases stomach acid secretions, so this pungent spice is used as appetizer and digestive. It is indicated for people with poor appetite. This spice also helps the gastric emptying and therefore can be recommended for healthy people with slow digestion.

For the same reason, as a culinary spice, pepper should not be taken in cases of gastritis, gastric ulcers, dyspepsia or heartburn, since the increase of acid secretions can worsen your symptoms.

Pepper is also a carminative spice, which also helps to promote gas removal. 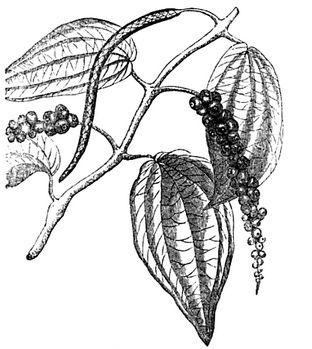 Scientific studies have shown that taking pepper regularly in the diet results in an important decrease in cholesterol. These effects are due to piperine, an alkaloid present in the pepper which appears to act on cholesterol levels.

Numerous antioxidant compounds, present in the grain, as well as aromatic substances as flavonoids; also contribute to the same effect.

Due to its fluidizing properties for the blood, black pepper is used to treat arteriosclerosis and to prevent blood clotting

Due to its richness in vitamin C, beta carotene and vegetable aromas as terpenoids, black pepper is a spice highly antioxidant that prevents oxidation and helps cells function properly.

Furthermore, a study found that black pepper inhibits cancer cell proliferation, because it has anti-inflammatory effect and the above antioxidant properties.

The anticancer effect is mainly achieved by means of black pepper extract, in doses of 200mg/ml. This extract inhibits COX enzymes in a 31-80% and the proliferation of cancer cells in a 3.5 to 86.8%.

In short, black pepper can be considered a natural anti-aging accessible to all palates.

Black pepper has also proved a stimulating effect on the thyroid gland, which indicates its ability of metabolic stimulant. * More information about pepper recipes in the listing above.

Pepper is a rubefacient when applied externally, that’s to say, it causes redness of the skin. For this quality, it is useful in rheumatic affectations that respond well to heat.

– A pepper poultice can be used as an expectorant in cases of bronchitis or pneumonia.

– Pepper gargles with a decoction of pepper seeds have been recommended in cases of paralysis of the tongue and uvula.

In Traditional Chinese Medicine, pepper has been used for its pungent flavor that warms the body. It has also been attributed with bactericide and diaphoretic properties (that stimulate sweating).

Its pungent qualities are considered very important for weight loss diet, because it is believed that it stimulates metabolism and activates the energy flow in the body.

It heats the abdomen and it is particularly used in the natural treatment of colds and flu for its antibacterial qualities, because it stimulates sweating (diaphoresis) and because it is a spice that benefits the lungs.

It has also been used to treat digestive disorders related to cold in the abdomen and food poisoning.

Although many readers are already familiar with the pungent odor of this fruit, the truth is that few plants have a fragrance as intense and spicy as pepper.

Pepper applications in aromatherapy are very valuable. Its essential oil is a natural relaxant, its fragrance invigorates the mind and strengthens the heart.

One must take into account that, although small doses can be applied as bactericidal, black pepper oil is irritating to the skin.

Studies at King’s College in London conducted on mice have proved very promising in stimulating pigmentation in people affected by vitiligo.

Pepper is widely studied for its antibacterial qualities, applied both as a medicine and for agricultural techniques:

– Pepper is used in the natural treatment of taeniasis.