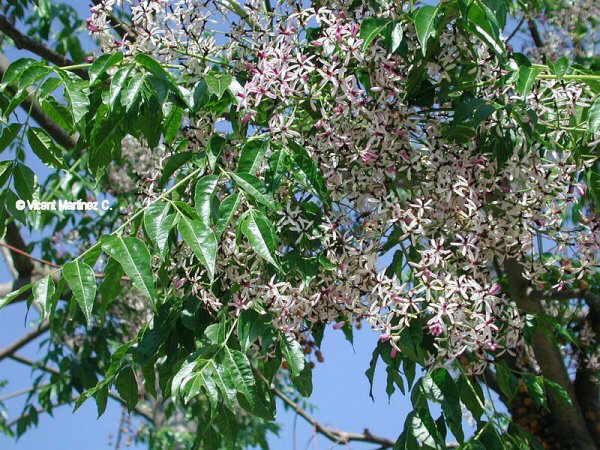 Habitat: South and east of Asia. Cultivated as ornamental plant in gardens, squares and next to the highways

Mainly the fruits. In smaller quantity the leaves, the bark and the flowers.

– Gardening: Native from Asia, but broadly cultivated and naturalised, it can be on the edge of the highways, parks and gardens. In many places of warm climate, like in the south of the United States, it has become an invasive species since with their fast growth and great size it shades many native plants that finish dying.

– Medicinal: In pharmacy it is used for making medicines against the intestinal worms.

– Industrial: The wood is very strong and resistant to the humidity reason why it is very appreciated in turnery. The dry fruits are used for making rosaries.

– Home: As repellent of insects, either in gardens, before being used the current insecticides or for clothes moths.

High. Especially in the ingestion of the fruits in autumn when they are very mature and they possess bigger quantity of toxins. Mortal cases have been identified in children when ingesting from 6 to 8 berries.

The infusion of its leaves in considerable quantities is toxic, irritating the stomach and producing vomits, diarrhea and breathlessness sensation. In the same way its berries are toxic and their ingestion should be avoided; on the other hand birds commonly ingest them without being toxic except in large quantities, which provokes them some kind of drunkenness. The fruits are very toxic in dogs and pigs.

Remove the product from the stomach, artificial breathing and breathing stimulants.