VARIETIES OF VANILLA: WHAT IS THE DIFFERENCE?

Although vanillin is the most popular, vanilla has another very aromatic substance: the guaiacol.

All varieties of vanilla contain both substances, although in different proportions.

Vanilla (Vanilla planifolia L.) has more vanillin than all other varieties, because its content is seven times higher. 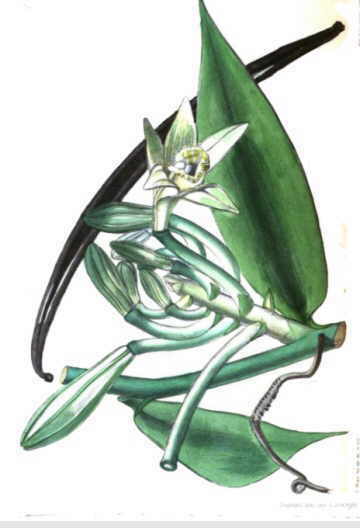 How many classes of vanilla are there?

There are 32 varieties of vanilla. Apart from Vanilla planifolia that it is being referenced in all the pages of this article, the most important ones are:

– Vanilla pompona Scheide: commonly called “vainillón”(= “big vanilla” in Spanish). It is native to the West Indies and tropical America. The leaves and fruits are larger. It contains vanillin, piperonal and anisic acid aldehyde.

Currently most of the vanilla consumed in developed countries is grown in developing countries such as Madagascar, Comoros, Reunion Island, Indonesia and Uganda.

It is worth to note the difficulty and cost of cultivation of vanilla. This delicate plant grows in very specific conditions, under humid and sunny climates of rainforest, and outside its natural habitat, Mexico, the plant should be fertilized artificially.

To these conditions, it must be added the vanilla plant needs three to four years to start producing fruit, although it bears fruit for 10 years or more.

The pods take 8 months to mature and are harvested when yellow. Subsequent blackish color is produced by the action of enzymes during drying process.

Txilotxitl or Tlilxochitl is the name of this plant given in the vernacular language of the Aztecs and means “black flower.” This was the first American orchid known, in 1552, and was traded when the Spanish colonizers discovered it and imported to Europe.