WHAT ARE AMINO ACIDS?

There are many different proteins, depending on the different combinations of amino acids. 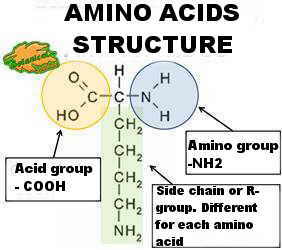 Its structure consists of 3 parts:

– The chain, radical or R group (-CHR-): The part that differentiates the different amino acids.

The other two parts of the molecule are the same for all amino acids:

– Carboxyl group or acid group represented by -COOH at the beginning.

Amino acids are linked together by peptide bonds forming long chains of tens or hundreds of amino acids (proteins). The peptide bond takes place between a carbon atom (carboxyl group) and nitrogen (amino group). This link, covalent type, is very stable and sturdy, making it possible to form large molecules can. 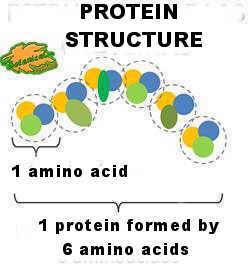 Chemical structure of a protein. It consists of units (amino acids). In each amino acid, is differentiated the carboxyl group (yellow), the amino group (blue) and its chain (green). Different proteins are obtained from different combinations of amino acids.

Properties of a protein vary depending on the combination of amino acids containing the chain, since each protein has its own chemical and physical characteristics.

Amino acids have amphoteric properties, ie, can act as both acids or bases in aqueous medium or a solution depending on the pH thereof.

There are 20 different aminoacids. Their many possible combinations result in a myriad of resulting proteins. There are 2 types of amino acids.

To refer to amino acids in a simpler way, they are represented by three letters. For example, Arg for arginine.

Essential amino acids encompass 9 types of amino acids that share a common characteristic: that our body can not synthesize by itself and requires their intake through food, to perform more complex proteins and perform multiple functions in the body.

Nonessential amino acids are those that our organism can synthesize by itself from other amino acids, or protein substances. It should be clarified that, although not essential, insufficient protein intake may trigger deficit of these amino acids.

The list of non-essential amino acids is as follows: