What is edelweiss (Leontopodium alpinum) ?

Scientific name: Leontopodium alpinum Cass. Its scientific name is derived from Greek Podion (foot) and leon, in allusion to the resemblance of the plant to the claws of the lion for his hairiness and shape.

Where to find edelweiss flowers

Habitat: Edelweiss is a plant of Asian origin that settled in the mountains of Europe and the Holarctic regions of the World during glacial periods. Its distribution extends along the highest areas of Europe and Asia.

Snow flower is currently the characteristic plant of the Alps, becoming the national flower of Switzerland. Widely distributed by European mountains, edelweiss can be found from the Jura and the Pyrenees to the Carpathians.

This plant grows at altitudes of between 1,500 and 3,400 meters, under high levels of ultraviolet radiation, low atmospheric pressure and extreme temperature and humidity.

Since ancient times it has been a flagship plant for the mountains and inaccessible sites, so that it has been very prized, leading to being widely collected as a beautiful flower for decorative and medicinal purposes.

This is the reason why this plant has become extinct in many of these places. It is now a protected species that can not be collected. It requires slightly alkaline sandy and well drained soil. 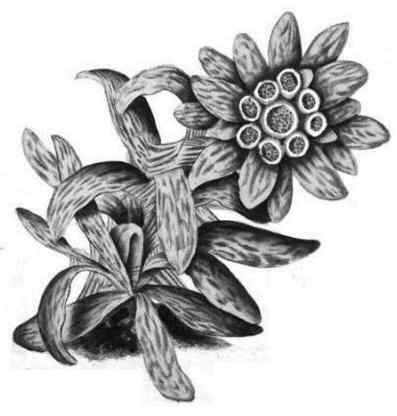 In the picture: illustration of stem, leaves and inflorescence of edelweiss

Snow flower or Edelweiss is a herbaceous perennial plant that typically grows on calcareous, rocky gorges and alpine pastures. Its life expectancy varies between 3 and 10 years.

Snow Flower measures between 10 and 30 centimeters. It is not usually higher because it has has short woody stems to withstand the strong winds of the mountain peaks. It grows from cylindrical rhizomes, thick, sturdy that they form colonies 50-75 centimeters in length.

Its leaves are lanceolate, covered with very characteristics white hairs to protects it from frost and to withstand evapotranspiration and dryness as a result of the high ultraviolet mountain radiation. In addition, this plant has a thick sap that enables it to withstand very low temperatures. 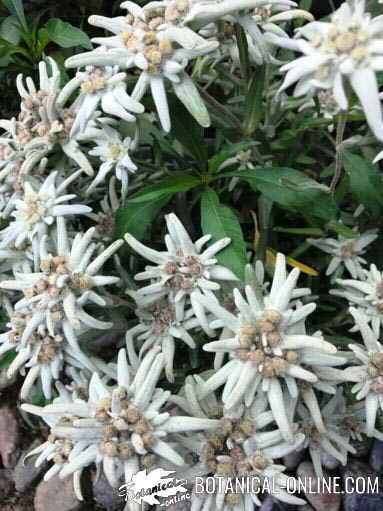 The flowering season of the edelweiss is from July to September. The inflorescence consists of tiny flowers grouped in terminal inflorescences containing about 7 or 9 flower heads, measuring about 5-6 inches in diameter. Each flower head has between 30 and 60 tubular yellow flowers.

The flowers are sessile and bind directly to the stem, stalkless. Each calyx is also full of hairs. It has large white bracts surrounding clusters of star-shaped flowers. Calyces are often confused with the flower petals although they are really formed by the sepals. They serve to protect the plant from sun exposure.

The mythology spoke of large blooms with a diameter between 6 and 12 inches, called “Edelweiss kings”

Importance of edelweiss flowers in the mountain

Edelweiss flowers have great ecological importance. They provide food for a variety of insects, belonging to 29 different families, although only a few of these insects are responsible for pollination.

Recent scientific studies have shown that the amino acids that make up the nectar of edelweiss are specifically required for the metabolism of the insects that pollinate them. A pollinated flower produces a single seed, which requires 20 to 30 days to reach maturity.

Edelweiss fruit is an indehiscent achene about 1.5 mm long and brown. They are surmounted by a crest, which facilitates the dispersal of the seeds.

Snow flower is NOT an edible plant, but it is used for medicinal purposes in controlled doses.