Home › Diet › Characteristics of dietary fiber
This article was endorsed by Elisenda Carballido - Dietitian nutritionist. Postgraduate in Phytotherapy and master in Nutrition and Metabolism.

Importance of plant fiber in the diet

What is dietary fiber?

From a viewpoint of food, fiber is considered to those parts of plants that can not be digested by the human body.

Chemically, fiber is formed by a special type of carbohydrates, called starchy polysaccharides or PNA, which in most cases, corresponds to the cell walls of plant foods.

Our body, unlike other animal organisms, does not have the appropriate enzymes to digest these components, so they are expelled to the outside after passing through the digestive tract.

Sometime ago it was not given any importance to this component in the diet. After a series of studies conducted in Uganda by two doctors, called Hugh Trowell and Denis Burkitt, it was found that fiber intake was very necessary to maintain good health. 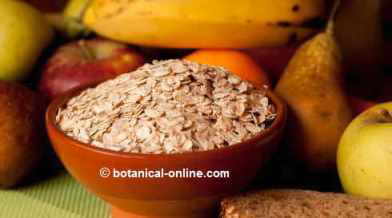 Oatmeal is full of dietary fiber

This study was focused on finding out why patients Uganda native had a very low prevalence of certain diseases compared with patients in England. After studying numerous factors, they concluded that the solution had to be in food.

Further studies, conducted in the past 20 years have shown that a diet rich in vegetable fiber may help prevent many diseases.

Despite this knowledge, most studies in Western diets show that individuals in these countries consume very little fiber, and instead consume large amounts of fat, which is not healthy.

Individuals of populations African typically consume between 40 and 60 gr. dietary fiber, which means consumption is much greater than the diet of the average person of U.S. who eats about 12 gr. daily.

How much fiber do we have to take?

The recommended daily dose of dietary fiber (RDA) is established between 25 and 30 gr. daily by most medical institutions.

At a minimum, should follow the recommendation from the World Health Organization recommended that one should not fall below 22 gr. daily.

Many medical and nutrition experts believe that this dose is still insufficient and that we should eat at least about 30 gr. daily.