Types of antinutrients in legumes

What classes of antinutrients do legumes contain? 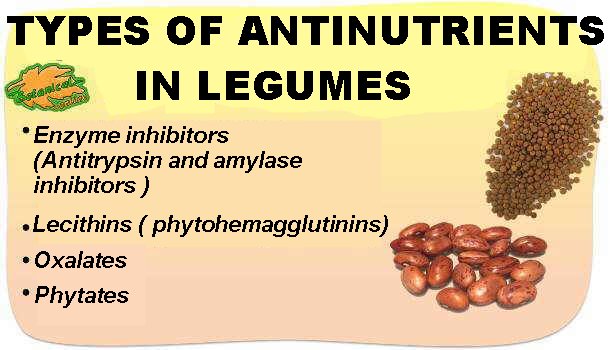 Lecithins or hemagglutinins of legumes

Phytohaemagglutinins are lecithins that are free or bound to the carbohydrates of the seeds, forming glycoproteins. These have the ability to bind to intestinal cells and produce severe digestive discomfort, abdominal pain, nausea and vomiting. These symptoms disappear in a few hours.

Oxalates are components of legumes that are also found in other seeds and vegetables, such as beets, spinach, chard, sesame, pure cocoa or even coffee.

These components are also present in legumes, although to a lesser extent than the foods mentioned above. Their main problem is that they combine with calcium and iron preventing their absorption. They can also produce kidney stones.

Beans are the richest in oxalates, while lentils and chickpeas contain them in a small amount. After cooking, the oxalate content is lower.

Phytates are another type of antinutrient found in many other seeds, mainly in whole grains. Phytates capture iron and zinc, preventing their assimilation.

Unlike other antinutrients, phytates can decrease with soaking in warm water (about 45 ° C), for a few hours, with a splash of lemon to act phytases (enzymes naturally present in raw legumes).

Legumes contain saponins, mainly in the outer skin that covers them, in the form of a resinous layer.

Saponins are bitter substances that can act as emulsifiers forming foams. The foam that forms in the cooking water indicates the presence of these substances, which abound in soy beans (5%) and in other grains such as quinoa.

In the body, saponins can drag different nutrients, such as cholesterol, and prevent their absorption. But certain saponins can cause damage to intestinal cells. To eliminate them it is convenient to pass the legumes through abundant running water and rub, until all the saponin is eliminated.

There are poisonous plants with very abundant amounts of saponins that produce the hemolysis of red blood cells, but these effects do not occur in edible foods.

Other antinutrients of some legumes

Some legumes, such as soybeans and their derivatives, have goitrogenic components that inhibit the correct absorption of mineral iodine.

The same legume, soy, contains a lipoxidase or lipoxygenase (antivitamin) that blocks the assimilation of vitamin A. For this substance to be released, the raw and moist seed must be broken. This enzyme is also responsible for the taste of legumes. With its action, it breaks the fatty acids into hexanal, hexanol and octanol, which give a characteristic  herb-like or mushroom-like flavor to soybean derivatives.

Soy is also the richest food in phytosterols. These components compete with the absorption of cholesterol preventing it from being absorbed. Another antinutrient present in beans is the antivitamin B1 or antithiamine.

For a complete analysis of the problematic components that legumes may have, aflatoxins should be mentioned.

Unlike antinutrients, aflatoxins are not produced by the plant, but are contaminants of the food during processing, specifically, toxins that produce fungi in the grains during storage.

Do legumes have many aflatoxins?

To avoid the presence of aflatoxins in legumes, it is important that they are kept in dry and airtight glass jars, without moisture. Avoid keeping these legumes for too long.

–  Characteristics of antinutrients in legumes

Antinutrients in cereals and seeds

How to eliminate antinutrients from food