What are the main types or varieties of apples?

The main varieties of apples are:

– Golden delicious: It is an apple that originated in the United States. It is a type of apple, as its name suggests, bright yellow and soft skinned, flecked with gray. Its pulp, whitish-yellow, is very tasty because of its richness in sugar.

Collected in late summer and early autumn, it can be stored easily. It is the most consumed of all and one of the most prized because it can be preserved for long once you pick it up either refrigerated or not. Used for many purposes, for example, to eat it raw, in cakes or simply baked. 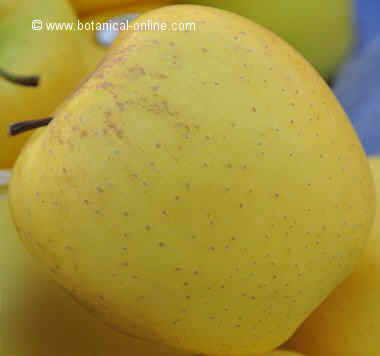 – Red delicious: As the name suggests, it has a bright red skin . Very tasty white pulp, more pasty than Golden Delicious and with a little acidic flavor. It also comes from the United States, from a very productive apple tree. To obtain its full potential, it is often planted in rows with barbed wire to allow the wires to hold the weight of its large production.

Collected between September and October, it holds very well in a cold-storage room throughout the entire season. The Royal Red Delicious variety comes from it, producing large and round fruits with a more compact delicious meat than Red delicious. They are used mainly used to eat raw.

– Gala= Royal Gala: From New Zealand. It has a greenish yellow skin with reddish or green cracks in the vicinity of the fruit stem. It is a hybrid variety which was obtained across the delicious Kids Orange Red with Red Delicious, getting a sweet apple with a crunchy texture.

It can be found in the market since late summer to early spring, with a very good quality to eat raw and not bad to prepare in cakes or baked. 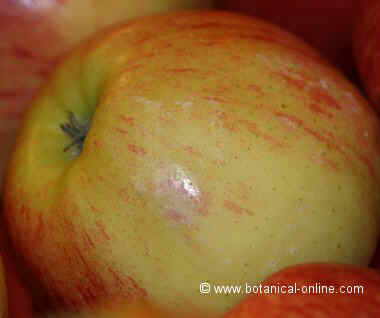 – Fuji: A species from Japan. Its skin has a light yellow color covered by a kind of red -yellowish cloak and red strips . Its meat is sweet, crunchy and creamy with plenty of juice. It tastes a little acidic. Collected from October to February, it can be seen in market almost all year because it keeps well. It is best to eat fresh but also to make cakes or baked. 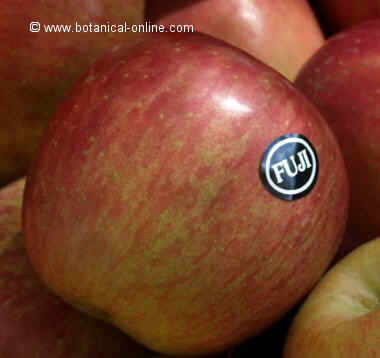 – Granny Smith: It is an Australian species. Its color is light green with white specks. Its flesh is white, with a crunchy texture and tart taste. Widely used in the southern hemisphere, you can find large plantations in South Africa and Argentina, although, gradually, is being cultivated in other parts of the world, especially in the United States. It needs the Golden variety to be pollinated, so both species are usually planted together.

– Honey Crisp: With a background of yellow color that appears almost completely covered in red. It is a high-sugared apple, crisp and with abundant juice. This variety is very resistant to being put into storage, so that, although picked up from September to October, it is available on the market until mid-summer. Excellent for all uses, both raw and in the kitchen.

– Reinette, Rennet, = “Reineta”: The group of French varieties of rennet apples are produced by highly productive trees. They all have good sized fruits, rounded and flattened, with more or less sweet yellowish pulp but with a touch of acidity. Within this group we have:

– Canadian Rennet: Despite its name, it comes from France. It is the most prominent rennet type. Green or slightly yellow pulp. Collected in early autumn, it can be found in the market throughout the season, because it is a hard-enduring apple variety if refrigerated. It is useful both to eat, raw or cooked

– Red Canadian Rennet: It presents qualities of taste and texture very similar to the previous one, but the color of its skin is yellowish with a reddish coat.

– Russet Rennet: It has a yellow-brown skin with light red bands in the part facing the sun, and very prominent specks. It is a variety developed in Canada to replace Golden Russet as a result of its resistance to the ” apple scab ” an infection caused by the fungus Venturia inaequalis.

– Zabergau Rennet: It comes from Germany. It presents a very elongated shape, reddish brown color and crisp white flesh with a nutty flavor.

– McIntosh: Characterized by its attractive red skin with a dashed yellow part in the fruit stem. It has a very firm, juicy and aromatic pulp with a distinctive spicy flavour. It is the best apple to use in any kind of stew or to eat fresh. Although collected during the month of September, it is available in the market until May.

– Empire: This variety comes from the cross between McIntosh and Delicious. Noted for being beautiful dark red, very uniform throughout the fruit, covered by a kind of waxy texture and for being complete round. Its creamy white flesh has a slightly acidic and sweet taste. It is used primarilyto eat fresh or in the production of cider.

– Red Rome: It it dark red with small white specks. Very firm flesh with very high acidity which makes it particularly suitable to use in the preparation of pastries or baked. In the last case, it holds very well and goes on particularly strong under the fire losing some of its acidity, which makes it very delicious. It is commercially available from early autumn to mid- winter.