Characteristics and benefits of white meat

What is white meat?

White meat is considered the muscular part of non-mammalian animals such as chicken, turkey and the meat of other game or domestic birds (quail, partridge, …). 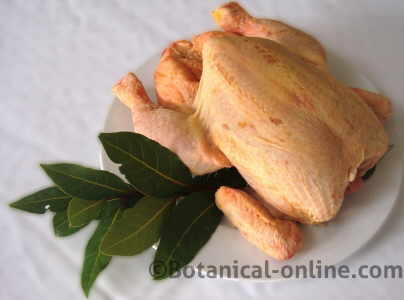 Photo of chicken with laurel branch. Chicken is classified as white meat, like the meat of other birds.

They are called white meats because they have a lower iron content than red meats. This characteristic is responsible for its pale coloration.

As an exception, rabbit meat (poor in iron) and also lean pork parts, such as loin, are included within this group.

Like all types of meat, white meats are rich in protein. It is said that meat provides proteins of high biological value, because it does not have deficiencies of essential amino acids as they do have some vegetable proteins.

Generally, proteins of animal origin are more bioavailable and therefore better assimilated than proteins of vegetable origin, such as those provided by cereals or nuts. This is due to the fact that the meat has a very high contribution in proteins (18% or more), does not have limiting amino acids or contains antinutrients that hinder the assimilation of proteins (such as the protease inhibitors present in some grains).

Does white meat have fats?

The main characteristic of white meat is its low fat content, less than the amount of fat found in red meat, sausages, cold meats, cheeses or other types of foods of animal origin.

The type of fat they contribute is mainly monounsaturated, it also has a high percentage of saturated fat and cholesterol. In birds, cholesterol is concentrated in the skin and in the viscera. It is recommended to remove these more fatty parts if there are problems of high cholesterol, obesity or diabetes. The skin of these meats can be yellowish due to the beta-carotene and fats it contains.

Chicken or other birds do not make sausages because their fat is too liquid consistency. However, you can make cold cuts with muscle tissue.

Meat is a very bad source of carbohydrates, it contains between 0 and 2%. Meats practically do not contain carbohydrates, these components are concentrated in the vegetable world (tubers, cereals, roots, pulses, etc.).

Meat is rich in vitamin B. Both white and red meat are one of the foods richest in vitamin B, especially in terms of its content in niacin (vitamin B3) and in cobalamin (vitamin B12). B vitamins have many functions in the body as they are involved in almost all metabolic processes. They are necessary to have energy and in the case of vitamin B12, it is important to avoid anemia, along with the supply of iron.

Meat is deficient in folic acid or vitamin B9, which is found in large quantities in foods of plant origin such as lentils, beans, chickpeas, sunflower seeds, green asparagus, avocados, almonds, or in broccoli. 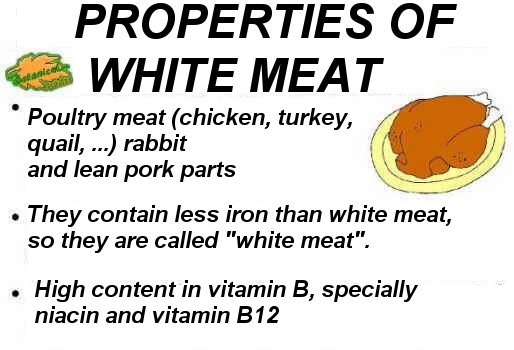 Summary sheet with the general characteristics of white meat

How much iron does white meat have?

Lower iron content: White meat has a lower iron content than red meat, which is why its color is paler. However, it is still a good source of this mineral. For people with anemia it is recommended to accompany them with other foods rich in iron. Meats are also a good source of zinc, necessary for the growth of children and young people and for fertility.

Another important difference between white meat and red meat is that white meat has a lower content of purines, which are components of food that increase uric acid in the blood can accumulate in the joints and produce a disease called gout.

It is recommended to ingest few purines to people with metabolic problems such as obesity, gout, hyperuricemia or fatty liver. 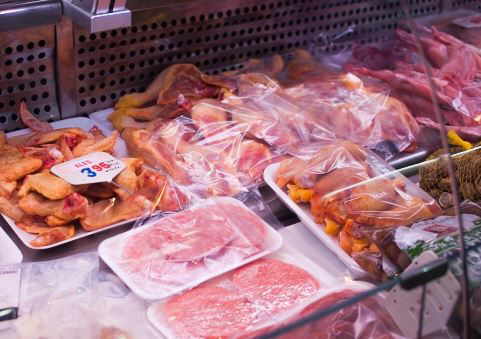 Showcase of a butcher shop. Burgers, cold meats and other processed meats are also made with white meat.

Is white flesh better than red?

White meat and red meat have similar properties in terms of their contribution in proteins, minerals and vitamins. Mainly they differ because:

Is white meat more recommendable or better than red?

According to studies, it has been observed that consuming a lot of red meat usually carries a higher risk of cardiovascular diseases and could be related to certain types of cancer.

The truth is that the exact reason why red meat would be more harmful than white meat is not known, is an observation resulting from statistics (for the iron content of red meat, purines, type of diet, type of cooking, lifestyle habits …?)

By caution, given the possible relationship of red meat with some diseases, the recommendation that is usually given in people who eat meat is to consume more legumes, fish, eggs and white meat, and reduce red meat.

Processed white meat is not healthy

Because it has been seen that red meat in excess can be harmful, recently many products processed with chicken or turkey meat have been developed, such as cold meats, hamburgers or sausages.

But these processed meats are not healthy due to their high content of additives (nitrites and nitrates) and salt. Therefore, they should not be taken habitually either.

A direct relationship between the consumption of processed meats and the increase of certain types of cancer has been demonstrated (more information).

Is it necessary to eat meat?

Historically, meats were the main source of protein, iron and many B vitamins in the diet of humans, especially when there were no current agricultural techniques or the high availability of food that can be enjoyed today in many countries.

Many people continue to defend meat as one of the most nutritious foods in terms of the contribution of these nutrients, however, it should be added that currently it is not necessary to eat meat to be healthy, because there are enough resources to carry a complete and healthy vegetarian diet . A properly planned vegetarian diet can be a healthy diet.

Is pork meat white or red?

All food composition tables vary slightly from one to the other. As guidelines, the following tables are presented:

– In the following table you can see that chicken meat has nutritional similarities with lean pork, for this reason some parts of the pork are included as white meats: