Home › Medicinal plants › Properties of watercress
This article was endorsed by Vicente Martínez Centelles - Founder of the web and director. Teacher of natural sciences, expert in plants, natural remedies and botanical photography.

The common watercress (Nasturtium officinale) is a plant of the cruciferous family or Brassicaceae to which belong well-known plants such as cabbage, cauliflower, Brussels sprouts, belong.

The plant grows wild abundantly in most rivers and shallow fresh streams of Europe and Asia where it originates. It is very abundant in aquatic areas that contain high amounts of organic waste, where they form a thick layer covering the surface of the water.

From Europe and Asia it has been extended to other continents and today we can find it in North America and South America, as well as in the Caribbean.

From the nineteenth century its cultivation was introduced in the orchards and its use as cultivated plant has been increasing gradually, until it became a vegetable available in most greengrocers and supermarkets. 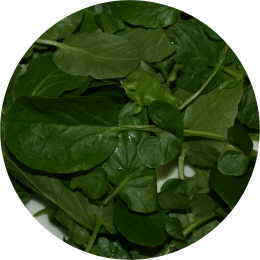 Detail of the leaves of the cultivated plant

Although its food uses are relatively recent. The plant has been used for its healing properties since ancient times. There are historical references in the classical world that mention the routine use of this food in the diet of people performing intense physical labor. He mentions the historian Xenophon Greek writer and philosopher (431 BC – 354 BC) and the Persians made use of this vegetable to recover strength after arduous tasks.

It is said that the Greek physician Hippocrates, the father of western medicine, built his hospital near the river to be available to those with fresh plants to heal their sick.

The Romans usually ate this plant to which they regarded as a good aphrodisiac, as a stimulator of the mind and as a remedy for baldness.

During the Middle Ages, the monks often cultivated them the gardens of the monasteries and used them to heal themselves or their fellow parishioners when they had problems or blood poisoning when they had to stimulate the appetite of people without appetite.

Later, as people got to know their properties, the use of watercress as a detoxifying, purifying, invigorating food has become more important.

A plant to prevent the appearance of cancer

Studies conducted some years ago in New York demonstrated the ability of this plant to eliminate toxins from tobacco and decrease the ability of these to develop lung cancer. According to these studies, patients who consumed 150 g of fresh watercress every day, divided into three meals, had a lung cancer rate much lower than other patients.

This ability of watercress is due to some substances called glucosinolates that, by acting on a series of enzymes, preventing the development of cancer cells.

It was also found that these components are capable of inhibiting another set of enzymes that act on the DNA strand, producing changes in it that can trigger the onset of cancer cells, not only in the lungs but also in the thyroid, colon, bladder or rectum.

It has also been shown that it can stop the process of angiogenesis, that is the formation of new blood vessels in tumors responsible for their metastasis to other parts of the body.

The glucosinolates are not unique to watercress but appear in other plants such as cabbage, especially broccoli, Brussels sprouts, turnips, radishes, mustard, etc.

The anticancerous capacity of watercresses is not only due to their glucosinolate content but to their high content in a variety ofantioxidants such as vitamin A, in the form of beta carotene, vitamin C, or rutin. It is very convenient to introduce this vegetable in the diet for cancer prevention. Antioxidants are capable of neutralizing the toxins that, over time, can lead to the appearance of cancerous processes.

(More information on Cruciferae against cancer)

Watercress, rich in vitamins and minerals

Watercress contains many vitamins. They are especially delicious in vitamin A, in the form of beta-carotene. We emphasize the importance of this vitamin in the prevention of cancer, as we have seen before, but it excels in many more aspects. For example, it is important to keep the light, preventing eye diseases such ascataracts or the night blindness. It also helps to maintain the skin in good state and protects us from the infections.

Watercress also contain lots of vitamin C and smaller amounts of vitamin E, which like vitamin A, have antioxidant properties. Along with vitamin A, vitamin C, protects the eye, helps maintain the skin and promotes healing of wounds, burns, the restoration of the bones or tendons, etc. It also seems to have good role in the control of the hypertension. As the daily recommended dose is 90 mg in a man and 75 in a woman, just eat about 30 grams of this vegetable to get a quarter of the recommended daily dose of vitamin C.

As for minerals, watercress is especially rich in calcium, phosphorus and magnesium. All are engaged in bone formation, so that i helps keep bones, ligaments, muscles, hair and nails in good condition. Calcium also help athletes to prevent cramps. A calcium-rich diet helps prevent plaque formation in arteries or lower high, so calcium is necessary for good health of the circulatory system. Magnesium is also involved in the smooth muscle function, provides heart rate and thins the blood, favoring movement.

Watercresses contain high amounts of potassium and a considerable amount of sodium. The high proportion of magnesium helps to neutralize sodium, regulating the arterial pressure and favoring the elimination of corporal liquids. For that reason this vegetable is considered very favorable for fluid retention diets.

A food with very little fat, hydrates and calories

Watercress contains lots of water, very little fat and very few carbohydrates. All this makes watercress a very light food, with only 11 Kcal per 100 g of fresh vegetables. Therefore, given its beneficial properties and its low calories, it should be introduced routinely in our healthful diet. It will be particularly suitable for people who want to follow a diet to lose weight, or a purifying diet. (In addition to eating the leaves, cleansing diets often use the juice of the plant)

We do not have to forget that this herb contains fiber, reason why it helps in the expulsion of feces, preventing constipation.

Watercress should be purchased in supermarkets and grocery stores. They can be bought fresh or packaged in small bunches of fresh and fourth generation vegetables, ready to eat.

Although water cress can be collected personally in creek or water streams from the month of September, is not very convenient to use wild watercress as food, as most of the time the waters are polluted and can transmit diseases. There are commercially grown watercress expressly for sale. This is done with drinking water and planted on a bed of sand. These watercress are trusted and can be eaten safely.

Top watercress are those with dark firm green leaves. When you bit them, they are crunchy. As they get older, the leaves become withered and yellow because of loss of chlorophyll.

They are usually eaten fresh in salads or used as an aromatic plant to flavor soups, meat, fish or vegetable purees. (More information on its properties and culinary recipes in the listing above)

As mentioned above, wild water cress should not be collected in the field because they can these contaminated. Among the possible infections that can provide us, we can mention the following::

– fascioliasis: The most common disease that we can transmit is called distomatosis or liver fascioliasis. This type of disease is very common in livestock, especially ruminants such as sheep, goats, cows or bulls. In these animals a flatworm (Fasciola hepatica) lives in bile ducts, feeding on blood. The infected animals spread the parasite eggs by defecation. To develop, eggs produce larva (miracidium) that must infect a specific snail (Lymnaea viatrix). The parasites leave the snails in the form of a mobile-tailed larva (cercaria) and put themselves on water plants. Once on the plants, they lose their tails and encyst in what is known as metacercariae.

The ingestion of contaminated watercress with metacercariae of this flatworm is the cause of the occurrence of a condition called fascioliasis that can affect both animals and men.

In its early stages, the disease affects the liver that is attacked by the young larvae, producing symptoms similar to a hepatic impairment (headache, poor appetite, vomiting, jaundice). If left untreated, the disease becomes chronic and the patients may have pain in the upper right of the area that is between the stomach and abdomen. They may also have vomiting, enlarged liver. Finally, when the parasites are located in bile ducts, they produce the third stage of the disease characterized by having some symptoms similar to those of gallstones as a result of the parasite producing blockages in these pathways.

– Listeriosis: Wild watercress can be easily contaminated with listeriosis bacteria (Listeria monocytogenes). This infectious disease can cause a generalized infection or even meningitis, especially in people with few defenses, pregnant women, fetuses or babies.

For these reasons, watercress should not be collected in the field, but in special crops, which are free of pests and diseases. Even so, the vegetables must be thoroughly washed to prevent any possible infection.

In addition to possible infections, wild and cultivated watercress, being spicy herbs are not recommended for patients with gastric ulcer or duodenal ulcer. They should also be avoided by people with sensitive stomachs, since they may produce heartburn or indigestion. Even in healthy people, they should not be eaten excess as it can irritate the urinary tract and stomach.

Keep in mind that this plant contains sulfur oils that are impregnated in the fingers when touched, so that it can cause eye irritation if we rub our eyes after touching this herb.

The essential oil of the watercress contains phenyltin Isosulphocianate which becomes gluconasturciin in the body, a glycoside with goitrogenic properties, meaning it can produce goiter.

Wild watercresses, given their facility to be recognized and their abundance, are considered are regarded as one of more important edible wild plants. However, as we have seen, we should not eat those gathered in the wild because of the large amount of pollutants they have. For those who have to be forced to eat in case of survival, it is recommended that they disinfect them with water in which purifying tablets have dissolved. Similarly, watercress should not be confused with hemlock (Conium maculatum) or lower hemlock (Cicuta virosa), two highly poisonous plants, quite different from the watercress, but growing in similar environments.