Home › Medicinal plants › Hemlock toxicity
This article was endorsed by Elisenda Carballido - Dietitian nutritionist. Postgraduate in Phytotherapy and master in Nutrition and Metabolism.

Scientific name: Conium maculatum L. The name comes from the Greek Koneion, which is how the Greeks called this plant and maculatum that in Latin means “spotted” and refers to the stains this plant has on the stems.

Habitat: Were to find hemlock?

It is a ruderal and nitrophilous plant. Common in some fresh and shady uncultivated places, rubble, along ditches, abandoned gardens.

Drawing of a branch of hemlock

Biennial plant belonging to the Umbelliferae. All of it has a foul smell that has been compared to cat urine. It is also said that it smells to mice. The smell gets stronger when the plant is squeezed or rubbed.

Its taste is slightly bitter and unpleasant. Both his smell as well as its taste makes it quite difficult to confuse with parsley or another plant of the same family.

More or less thick stems up to more than 3 meters tall (usually between 1 and 3 meters), cylindrical, fistulous, smooth, plenty mainly in its base and its branches of violet or purple spots.

Large leaves, pinnatifid, shiny pale green. White flowers on terminal umbels with 5 heart-shaped petals, 2-4 mm in diameter. It blooms from May to July.

Its fruit is a globular diachene with five ribs. 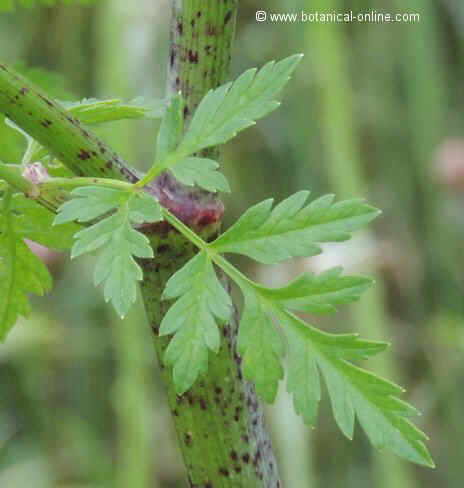 Because it is a poisonous plant, it should not be used as a homemade remedy

Hemlock as a classic poison

In Europe, Greece and Rome, hemlock was used as a usual poison.

Hemlock is a very poisonous plant. The toxicity depends on the temperature and the soil where it grows. In hot countries the toxicity index is higher than in countries with lower temperature. There are even references that in cold countries this plant has virtually no toxicity, while in countries like Italy or Spain toxicity is very high.

There are also references that in some places the plant has been used for food, so some scholars think that cooking could detoxify it.

There are cases of poisoning in people who have confused the leaves of this plant with parsley (Petroselinum crispum). Other times, its root has been confused with the root of the parsnip (Pastinaca sativa).

With hemlock were executed criminals in Athens mixed with opium so that death took place without being aware of it. Apparently it was this mixture that Socrates drank when he was sentenced to death in 399 BC

The philosopher describes how he felt while the poison was acting. He described how his members were becoming paralyzed from the feet up and how he was fully aware as muscle paralysis occurred. His death occurred when the lungs gradually stopped working. So Plato’s accounts in Phaedon:

– In contact with the skin: hemlock may cause dermatitis in some people. 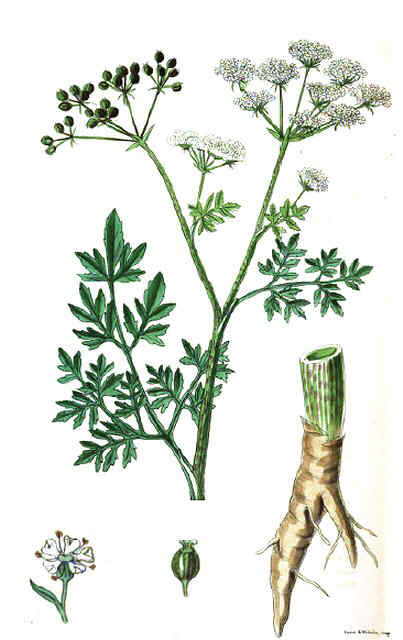 Colored drawing of the plant with details of the root, flower and fruit.

The symptoms occur within half an hour after ingestion approximately.

Is hemlock toxic for animals?

Hemlock is very toxic to all animals. According to some experts, only the goats get rid of its toxicity. The poison of this plant acts quickly after one hour of ingestion, leading most of them to death after two or three hours after the poisoning.

Among the main symptoms, animals have difficulty swallowing, convulsions and death by paralysis of the respiratory muscles.

Among all the cattle, those most likely to become intoxicated animals are cows and pigs, while sheep do not notice its effects both.

Poisoning usually occurs when animals eat dry hay contaminated with this plant. It is difficult for them to become poisoned with the tender plant because of the smell and taste makes them usually reject it.

Treatment is similar to that applied to humans: stomach emptying, anticonvulsants and neutralizing products, such as tannic acid.