Characteristics of anise or aniseed

Anise comes from the Latin word “anisum” which in turn derives from the Greek “Anisos”.

Habitat: It comes from eastern Europe in the area that currently includes Middle East, Turkey, Egypt, Greece and the Greek islands, where it grows wild. Currently listed as a species cultivated in many warm regions in the world although it is very difficult to become naturalized outside their place of origin and only be grown from seeds planted in April (See more details about its cultivation in the listing above)

Between the main producers of the world are Turkey, China, India, Mexico, Spain and Germany. Anise of better quality is produced in Spain. 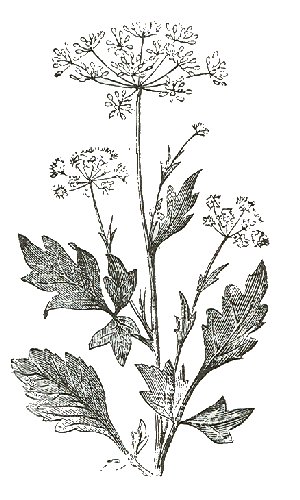 nternal use preparations with anise

Perennial plant of the Umbelliferae family of up to 50 cm in height. Stems erect, pubescent, rounded and striated arising from a woody root. Leaves petiolate, the lower heart-shaped and lobed, 2-5 cm in length, the upper lanceolate-linear, and very divided. White flowers about 3 mm in diameter, together in umbels, with long stalks, with five petals. Fruit of 3-5 mm in diachenium, aromatic and provided with 5 rows.

Harvesting and conservation: The fruits of this plant are harvested in summer before fully mature. The plant is hung in a shady place to dry. Once dry, it is beaten to make the fruit fall. These are dried in the shade and stored in clean and sealed containers, in a dry and shaded place. 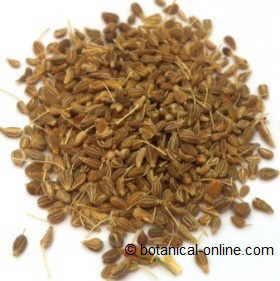 Since ancient times anise plant has been used as a medicinal plant as a spice and food. The first historical reference appears in the year 1550 A.C in the famous Egyptian papyruses of Ebbers, that can be considered as one of first treaties of medicinal plants.

It was used habitually in India or China. Its use in the Greek and Roman culture was habitual.

It appears in Regarding Medical Matters of the Greek Dioscorides. Pliny, the Greek writer, speaks of the importance of chewing its fruits to clear the evil breath after eating and of as this plant, when it was placed next to the bed, were able to tranquilize the people and to favor to remove the bad breath after eating and how this plant, when placed beside the bed, was able to reassure people and promote sleep.

With flour and anise the Romans made a special bread that was known with the name of “mustaceum” and which they used at the end of the meals to facilitate the digestion. Besides food, they habitually used it for multitude of applications, like, for example, to diminish the nerves, for the treatment of the epilepsy, to improve the digestion or to boost the appetite. Its importance was so great that it was used like currency.

Their medicinal uses were increasing, so that, as of century XV or XVI it was used habitually naturopathic physicians and the general population. Even in this era it came to be used as bait to catch the mice, because the aroma attracted rodents.

Internal use preparations with anise 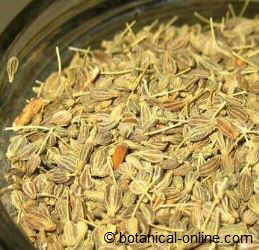 Anise has carminative, stomachic, antispasmodic and sedative properties . These virtues are used for the treatment of digestive abnormalities such as: 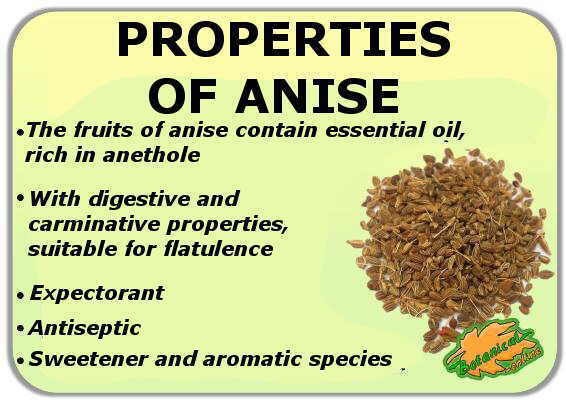 Summary of the main medicinal properties of green anise and its indications. It is a great digestive, carminative and expectorant remedy.

Anise has expectorant properties mainly due to its content anethole, thymol and terpineol. It is also a plant that contains more anti-inflammatory principles and is a good cough suppressant. This allows the lungs to help expel the secretions produced in the bronchial tubes, reduce inflammation and decrease the cough. The use of this plant is recommended as anomalies of the respiratory system:

Anise for diseases of the nervous system

Components like the alpha-pinene, alpha terpineol, stigmaterol, eugenol, linalol or thymol confer it sedative properties that can be used to calm the nerves. These properties already have been mentioned previously as very useful in case of gastric problems of nervous origin but they can also be used in other anomalies of the nervous system like:

Other medicinal uses of anise:

It has been verified that this plant is suitable for the treatment of other anomalies:

Used externally, anise is used mainly as a natural antiseptic in the treatment of the following diseases:

Anise as an aromatic spice

Anise is an aromatic and sweetening spice. It is used abundantly in the kitchen for the preparation of dishes and cakes of all kinds. It is very useful for flavoring soups or stews or can be added to dishes with legumes in order to make them less flatulent.

Benefits of cooking with spices such as anise

Spices are the phytotherapy hidden in the kitchen, because they provide a large amount of bioactive principles and nutritional properties, such as essential oils, organic acids, high content of potassium, calcium and antioxidants.

Despite their potential as functional foods, these ingredients do not appear in any food pyramid or nutritional guide. However, it is worthwhile to see that they are a very affordable and interesting component of the diet to introduce habitually to improve health.

Properties of the leaves and roots of anise: Are they edible?

The root is rich in pimpineline, tannins and essence. It has been traditionally used as antispasmodic, for spasms, stomach, liver disorders, diuretic, expectorant, aperitive, soothing and menstrual regulator.

At present there are practically no references to these traditional uses of the root, so its use is not recommended.

Other non-medicinal uses of anise

The pharmaceutical industry uses the essential oil to disguise the bad flavor of some medicines. In the domestic fishing it is used to give aroma to the baits, with which the fish are attracted. In India, this product diluted in water is used as cologne.

Is anise a safe plant?

The use of this plant, in suitable doses, does not present toxicity nor contraindications, except for certain particular reactions in certain sensible people to its components.

The internal use of the essential oil in high doses is toxic. It has narcotic properties.

It may cause narcosis, convulsions, problems of circulation and even originate a coma.

Improper use can cause symptoms similar to absinthism, a condition that occurs when you consume too much absinthe, a liqueur which contains anethole.

Who should not take anise essential oil?

– Pregnant and nursing women, and children under 6 years old should not ingest the essential oil.

Can essential oil in external use be dangerous?

Used externally, the essential oil can bring about adverse reactions with appearance of blisters or dermatitis in allergic people or with inflammatory diseases of the skin.