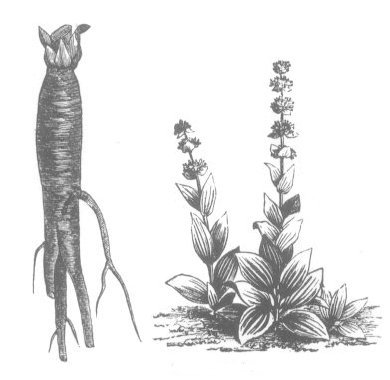 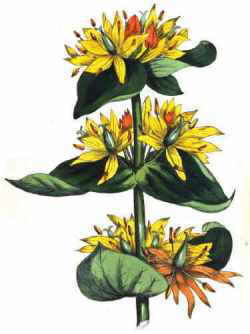 Illustration of stem with leaves and flowers of yellow gentian

Habitat: Where to find gentians?

Native from southern and eastern Europe, it can be found on calcareous mountains from 1000 m. high.

Its name derives from “Gentio”, King of Illyria, the alleged Adriatic region where the Indo-European language originated. It seems that these people used the plant to reduce fever. 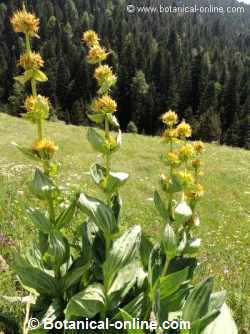 Perennial plant of the Gentianaceae family up to 120 cm tall.

Stems erect, arising from a very vigorous root up to 30 cm in length, brownish white on the inside and outside.

Lower leaves much longer than the upper, greenish-yellow with very prominent nerves. Upper leaves without petiole, opposite and pointed.

Yellow flowers gathered in whorls. Fruit is a capsule, which contains many seeds.

Gentian roots should be collected during the spring or fall, from plants that are at least two years of age. Preparations for liquor should be based on tender roots.

For medicinal preparations, they must be dried in the sun and stored in airtight containers in a cool, dry place. This is protected plant in many places, so it is strictly forbidden to collect it in the wild.

INTERNAL USE REMEDIES WITH GENTIAN 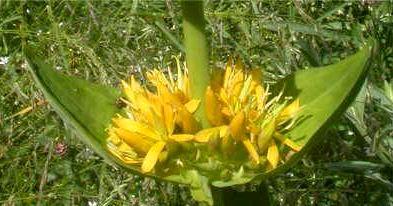 Gentian for the diseases of the stomach and the digestive system

Gentian is one of the best remedies for stomach problems. Because of the bitter principles contained in this plant, gentian has the ability to increase production of digestive juices so that it whets the appetite and aids digestion.

The main component responsible for this property is amarogentin, an active ingredient which increases production of saliva which triggers an increased production of bile and gastric juices. Gentiopicroside and inulin have gastro-stimulant properties, while the swertiamarin stimulates the pancreas.

This plant is used in the following digestive anomalies:

Is gentian a good remedy for gastritis and ulcer?

Some experts suggest that the bitter principles of gentian, used with ginger and liquorice, can be useful for the treatment of gastritis and ulcers. But others warn that these principles, because they increase gastric acid and bile content, can worsen the inflammation of the stomach or ulcers and that this plant should never be used when the patient has heartburn, caused by hyperchlorhydria, inflammation or ulceration of the stomach. According to them, when in doubt, it is better to resort to other safer plants.

A plant to increase bile production

Gentian has the power to act on the gallbladder and liver, being able to increase production of bile. This property can be used in cases where there an insufficient bile production is the main cause of of indigestion. (Maceration at 0, 2% of gentian root for a couple of days. Drain well and dissolve 400 gr. of Honey. Drink a couple of little cups a day)

Gentian for the treatment of hypothyroidism

Gentian has components that help stimulate the production of the thyroid hormones, so its use is recommended in the treatment of hypothyroidism (Maceration at 0, 2% of gentian root for a couple of days. Drain well and dissolve 400 gr. of honey. Drink a couple of little cups a day)

Gentian to invigorate the body, purify the blood and help prevent or overcome infection.

In situations of physical weakness, during convalescence from illness, gentian helps overcome the lack of energy because it is a good tonic that restores the strength of the body. In addition to the digestive tonic properties, gentian is also a general tonic. (Maceration 0.5% for 4 hours in cold water. Drink two little cups half an hour before two main meals)

Gentian possesses leucocinogenic properties, that’s to say, it can increase the production of white blood cells, which strengthens the immune system and helps prevent the emergence of new contagious diseases or facilitates their healing.

As a blood cleanser, gentian is used to remove toxins and impurities from the bloodstream. (Infusion of half a teaspoon of dried root in a cup of water. Let stand for 10 minutes. Take two cups per day)

There is evidence that this plant has antibiotic properties so it can be used to treat bacterial-type diseases such as ear infections or otitis, bronchitis, etc. (Sprinkle gentian root powder on a toast sweeted with honey or jam. Take two or three toasts a day. Spread a powdered gentian teaspoonful among the two or three toasts) 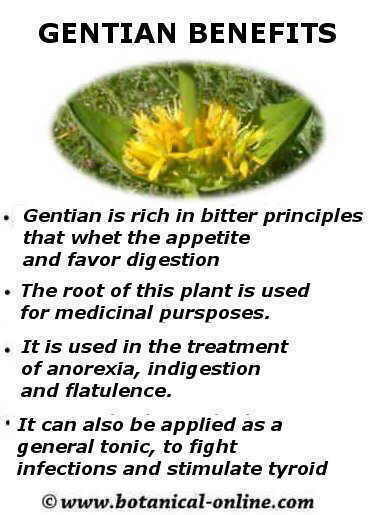 Its ability to stimulate the production of white blood cells and increase defenses is used in the prevention of numerous diseases affecting the respiratory system: cold, flu, sorethroat, sinusitis, pharyngitis, bronchitis, etc.

It has been proven to be very effective in reducing allergy symptoms. (Maceration of a spoonful of dried gentian root per cup of water during the night Take a couple of glasses a day sweetened with honey) (Tincture of gentian dissolved in water according to the conditions of the leaflet)

As a blood purifier, gentian is used to remove toxins and impurities from the bloodstream. (Infusion of half a teaspoon of dried root in a cup of water, let stand for 10 minutes, take two cups a day)

It has been proven that this plant has antibiotic properties, it is used for the treatment of bacterial diseases, such as ear infections or otitis, bronchitis, etc. (Sprinkle gentian root powder on toast with honey or marmalade, take two or three toasts a day, distribute half a teaspoon powder between the three intakes)

Gentian has been used as a substitute for quinine to treat fever. (Decoction of half a teaspoon of dried root per cup of water. A couple of cups a day)

External use preparations with gentian

Applied on the skin, gentian is very useful for the following problems:

Contraindications and toxicity of gentian