Types of agave or maguey

Varieties, classes or species of maguey

The main species of agave or maguey are:

– Black-spined Agave (Agave macroacantha): As the botanical name suggests, it is a type of agave whose leaves end in large spines (macroacantha = large thorns) The species name refers to the strong and hard gray or brown thorn the leaves end with.

Leaves are stiff and straight, grayish green or grayish white, with dark brown teeth on the margins

Flower stalk up to 1, 8 meters high in which a large number of red flowers are arranged.

Plants form rosettes 40 to 50 cm wide, 60 or 70 cm high. The individual rosettes are grouped into large clumps up to 5m wide.

– Century plant, maguey, American aloe (Agave americana) Mexican species characterized by its gray leaves with very thick and strong terminal spines and sharp lateral spines. The leaves are arranged in rosettes, forming very large clusters which can have up to 9 meters or more wide. Yellow flowers located at the end of floral stem up to 6 meters high.

The two most characteristic cultivars are Agave americana ‘marginata’ with leaves having a yellow border and Agave americana “Mediopicta” with a very wide white central band.

It is most often used medicinally (more) 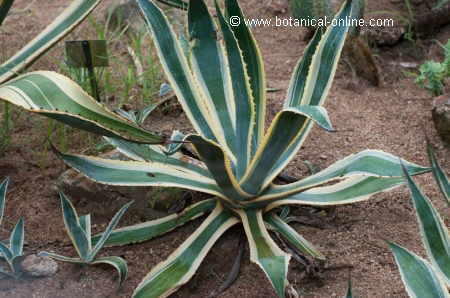 – “Espadin, marginata, lechuguilla” (Agave vivipara) The species Agave vivipara had been considered to be Agave angustifolia. Today, it is classified as a different species.

It is characterized by its narrow, lanceolate more than a meter long leaves, about 10 cm wide, with a white band on margin and finished in a strong spine 3 cm long. Each leaf recalls the shape of a sword, hence the Spanish popular noun of “Espadin”(= small sword).

The leaves have a color ranging from pale green to gray. They are soft to the touch. The greenish yellow flowers are distributed on an arched flower stem between 2.5 and 3 meters high. The shape of the flower stem provides its common name of “swam’s neck”.

From the main stem many saplings will develop that end up producing a cluster of fairly dense rosettes. It grows wild very sporadically in Jalisco, Mexico, between 900 and 2500 meters. 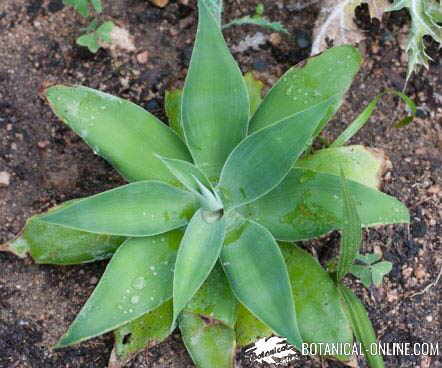 – Zapotec, Mixtec, Caribbean Agave (Agave angustifolia) As its botanical name suggests, it is characterized by narrow leaves, vertically erect that, together, make copies with the appearance of a rolled hedgehog. It is most often used in the production of mezcal.

In addition, it is also used for making agave sap and edible flowers appear in many Mexican recipes in the area of ​​Oaxaca.

With the fibers of its leaves cordage, rope, shoes, baskets and clothing are made.

It is used medicinally to treat sprains, strains, and broken bones. 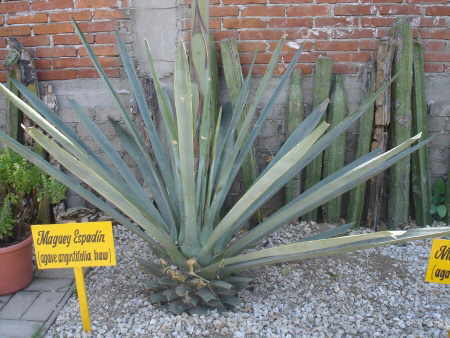 – Blue Maguey. Blue Agave, Tequila Agave (Agave tequilana) cultivated species, originated from Agave angustifolia. The Agave tequilana Weber is the only variety of agave authorized for the production of tequila. It grows well in sandy soils from 1500 meters. 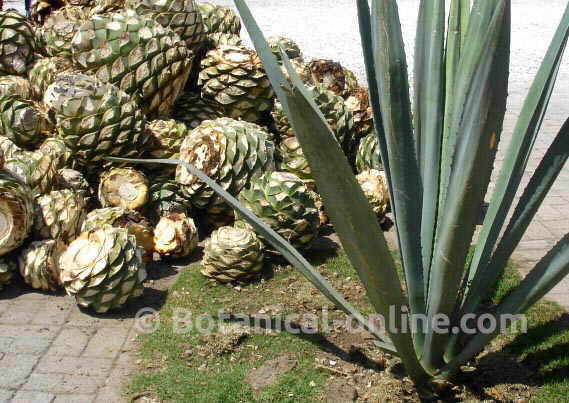 – Cabbage head agave (Agave parrasana): Plant from the mountains of central Mexico (State of Coahuila), where it grows on exposed slopes between 1500 and 2400 meters.

Blue-green leaves provided with lateral spines of black color and finished in a strong and thick spine of the same color. Isolated rosettes, 60 to 90 cm high, resembling the shape of a cabbage, hence its common name in English 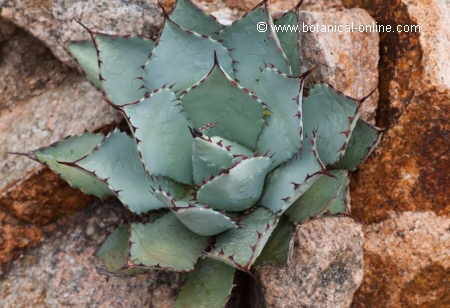 – Butterfly Agave (Agave potatorum) The name of the species “potatorum” is Latin for “from drinkers” and refers to drinks that are made from this plant.

It is noted for its leaves 60-90 cm long and 20 cm wide, with wavy edges with a narrow band of reddish brown. Very fine lateral teeth. Floral stem to 4.5 m. tall with yellow-green flowers that appear in summer.

Very tolerant to drought, it prefers poor and well-drained soils. It is one of the species harvested to produce mezcal. 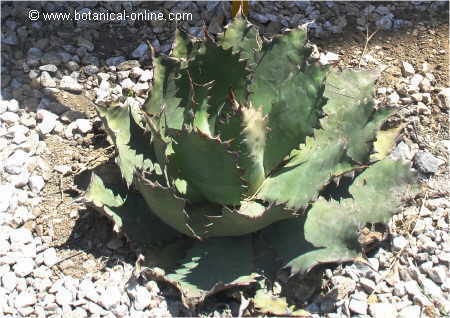 – Cabuya, Cabuyo, Dwarf Thread Agave (Agave filifera): Plant from the Sonoran Desert (Mexico) between 1000 and 2200 meters. The species name “Filifera” is Latin (it means “carrying threads”) and refers to the abundant presence of filaments that emerge from the edge of the leaves, which have a lanceolate form and a terminal spine. 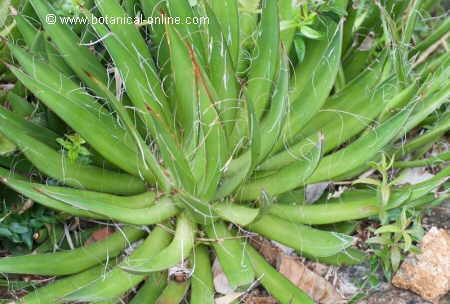 – Spider agave, squid agave (Agave bracteosa): From Northeastern Mexico (it is native to the desert of Coahuila) where it grows in limestone clifts between 900 and 1700 meters. It is characterized by yellowish-green leaves recurved narrow and long (up to 70 cm in length, 3 to 5 cm wide) forming a single rosette 45 to 70 cm wide.

Since the teeth of the leaves are small and recurved and leaves have not a terminal spine, it is a plant that is used for planting in spaces of passage because, unlike the rest, it is not sharp.

Floral stalk is narrow and unbranched. The yellow flowers come out over a long time from the bottom up. Looking at its floral stem, it resembles a puya.

– Parry’s agave, mescal agave (Agave parryi): It comes from northern Mexico, New Mexico and Arizona. It is characterized by forming globular rosettes with leaves about 40 cm long, 6 cm wide. The lateral teeth of the leaves are small and curved. Some samples exist with completely smooth edge

The leaves have a color that can range from light green to gray-white. They have a strong terminal spine.

Floral scape up to 4.5 meters high, with 20 or 30 side branches provided with yellow flowers. It blooms between June and August.

Agave parryi var huachucensis only grows in the Huachuca Mountains in southern Arizona. It has longer and wider leaves (up to 60 cm long, 20 cm wide), with maximum width at the ends.

It has been widely used to produce mezcal, fibers, soap and as a medicinal plant.

Henequen, Sisal (Agave fourcroydes / Agave sisalana): Plants from Yucatan, Mexico. Today there are only cultivated forms and no wild plants of these species are known.

Sisal is the agave species from which the most leaf fiber is obtained. Of all the plant fibers, sisal is the second fiber extracted after cotton. (More information) 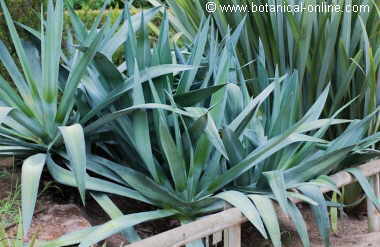 – Hazards and contraindications of agave syrup