Habitat: The cultivated specimen can be found inside the area of Mediterranean influence of unirrigated lands. Wild olive tree (Olea europaea var. sylvestris) appears in dry places of Mediterranean climate.

Perennial tree of the Olive family – oleaceae – up to 15 m. Grayish stems when tree is young, darker as it grows. Bark desegregates into squared pieces. Opposite leaves, till 8 cm., lanceolate, coriaceous, bright up, whitish below. Fruits in drupe (Olive), edible.

The cultivated specimen can be found inside the area of Mediterranean influence of unirrigated lands. Wild olive tree (Olea europaea var. sylvestris) appears in dry places of Mediterranean climate.

Picking-up and storing: Leaves and bark can be collected throughout the year. Olives in autumn or winter. Leaves and bark must be dried and kept in a dry, well.- closed container..

The leaves, the fruits and the bark.

Internal use remedies with olive tree

– Hypertension: It decreases blood pressure and it is very useful in cases of arteriosclerosis because it has a vasodilator power to prevent angina pectoris or heart attack, by expanding the coronary artery (Infusion of 60 gr. of dry leaves per litre of water. Drink three cups a day) Other vascular problems related with a bad peripheral blood flow, such as chilblains, can be treated in the same way.

– Diuretic, antiglycemic and hepatic: By increasing urine production, it favors the body to get rid of impurities, being very interesting in case of diabetes, liver inflammation and gallstones (The same infusion seen above would suit in this cases) (It is also a good remedy to drink a couple of teaspoonfuls of virgin olive oil)

– Laxative: In case of constipation you can take a couple of teaspoonfuls of raw olive oil in the morning before having breakfast.

– Hemorrhoids: Bark is used in this occasion (decoction of 30gr. per liter of water. Wash the affected zone)

– Anti-cholesterol: Because the richness of olive oil in unsaturated fats, it is recommended its use as a edible oil to fight cholesterol, favoring the absorption of vitamins E, A, D y K.

External use remedies with olive oil

– Dermatological: To treat wounds, or whatever skin disease, such as scabies (Mix olive oil with black wine and honey. Put on the skin. Also a decoction of 30 gr. of dry leaves per litre of water. Wash the affected skin.) (Rub the affected part with olive oil.) Olive oil can also be used to prepare natural shampoos.

It is very well known in this sense the famous Samaritan balm which is formed by mixing in equal parts olive oil, white wine and yolk. Beat all the components till a paste is formed to apply it on the skin. Very useful to treat dry skin)

– Vaginismus: Olive oil is highly recommended to lubricate the vagina when there is vaginal dryness.

– Rosacea: Apply massages for 3 or 4 minutes with olive oil. Use your fingers to make circles on the face. This treatment may help improve symptoms of rosacea or delay its onset.

– Nail ridges: To avoid nail ridges, it is interesting to massage nail cuticles with olive oil before bedtime.

– Earwax: Olive oil can be useful to soften plugs and to facilitate subsequent extraction (Put a couple of drops of olive oil inside the ear and cover the ear with a bit of cotton. Disinfect the ear with parsley or onion juice after the extraction.)

– Earache: Make a small ball with parsley and olive oil, add a little salt and introduce the mixture into the ear.

Edible uses of olives, the fruits of olive tree

From the olive tree we generally use the fruit (Olive) in two different ways:

– To eat them pickled, that’s to say in a suitable treatment to remove their acidity to make them edible. This is done by a procedure that consists in putting the olives into a caustic soda bath to extract the acidity. They must be preserved in brine afterwards. (highly concentrated salty solution).

They can also be eaten uncooked. To make this possible, after picking the up, before being ripe, they must be smashed and put in water that must be changed daily for ten days. Then they can be preserved in brine and seasoned according to one`s taste. There are different ways of doing it: with herbs (fennel, laurel, etc.) or adding some spices such as garlic or pepper, for instance.

To eat olives at the beginning of a meal produces a stimulation of the digestive tract, but, taking into consideration their high salty content, it is not very suitable to eat many, specially in cases of hypertension or obesity. 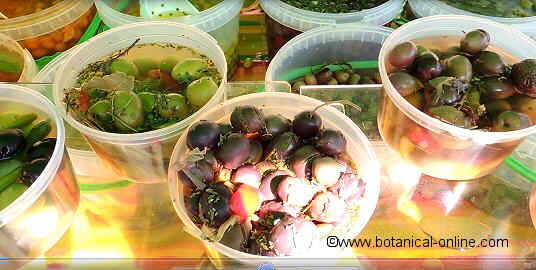 – To extract the olive oil, that can be done in two ways:

– By physical methods (By squashing and centrifugating the fruit. By this process oil flows into some containers.

Using this method different kinds of oils are obtained:

– Oil containing more than 3,3 % is called rampant oil and can not be used as an edible oil.(It was used to burn candles)

– By chemical methods: Using solvents which gave way to the so called refined oils. No matter which method is used, the waste non-edible products are used to fertilize fields.

– Solvent: it is a suitable means to solve the plant properties