Does parsley contain many oxalates?

Can parsley be harmful to the kidneys because of its content in oxalates ?

Parsley (Petroselinum crispum) is one of the richest plants in oxalates per 100g. However, in the food doses that are usually consumed, it does not suppose a very significant contribution of oxalates in the diet.

Eating many oxalates can be irritating to the digestive system and, if ingested in very high amounts, can cause small digestive or urinary hemorrhages. However, such amounts are hardly produced by ingestion of parsley. (See: Toxicity of oxalates)

How many oxalates does parsley have?

The oxalate content of parsley is much lower than that of other vegetables, such as spinach, chard, huauzontles, rhubarb or sorrel. For example, a bouquet of 10 grams of parsley contains only 16 mg of oxalates. Instead, a plate of boiled spinach (100g) contains about 700 mg of oxalates.

Parsley, although it is a food rich in oxalates, does not imply a very significant contribution of oxalates in the food doses consumed.

On the other hand, the oxalate content of food should not be a cause for concern, as it only constitutes a health risk in those people who have a tendency to form stones in the kidneys (usually due to genetic or disease factors) .

For most people, eating foods with oxalates has more advantages than possible contraindications, because normally these foods have an interesting nutritional value.

What problems could cause eating a lot of parsley?

There are some recipes, such as couscous salads, or parsley remedies, which use large amounts of parsley. In general, occasional consumption of parsley is not toxic to health.

Eating a lot of parsley on a regular basis can lead to a high intake of oxalates. Oxalates are antinutrient substances, which inhibit the absorption of minerals such as calcium, so they are considered mineral sequestrants.

But before assessing whether a food sequesters calcium, it is necessary to evaluate it in its entirety. In the case of parsley, although it contains many oxalates, it cannot be considered a calcium sequestrant because the plant itself also provides a lot of calcium (200mg of calcium per 100g, almost the same as milk). Therefore, its oxalate-calcium ratio is balanced. 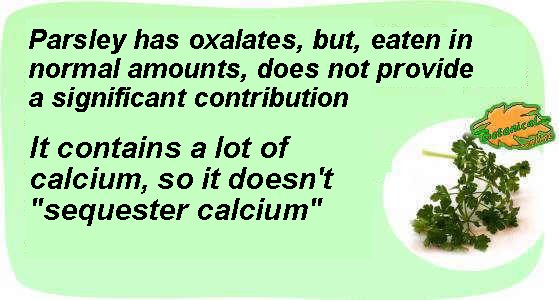 Can eating a lot of parsley produce kidney stones?

In general, a diet rich in oxalates can favor the formation of kidney stones, but in very few cases it is the only cause.

Kidney stones are usually given by the sum of many factors: lack of hydration, acidic urine (acidifying diet), urine infections, etc.

In case of kidney diseases or the presence of calcium oxalate crystals in the urine, it is advisable to AVOID foods that contain many oxalates, such as spinach, beets or parsley.

Properties of parsley for the skin

Properties of parsley for your hair