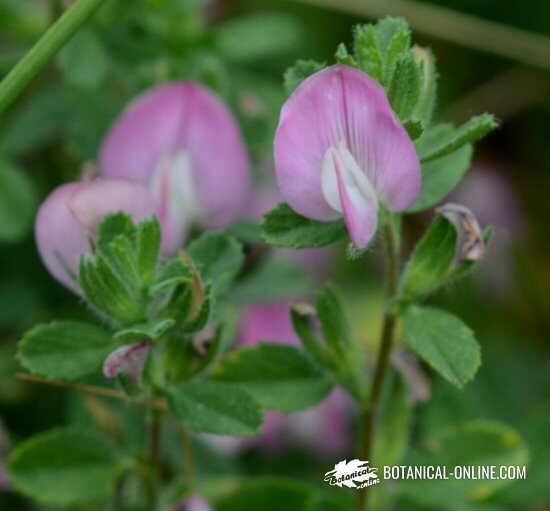 Popular names in most languages refer to three concepts. On the one hand, the presence of their long and pointed spines, dangerous as the nails of a cat, able to draw the eye to anyone who approaches them to the face.

The second concept refers to the fact that many animals approach the same to scratch the skin, that’s why its name as ” peine de asno” (=ass comb).

The third type of names comes from the depth of its roots that makes it difficult to plow the ground when this grass is very abundant as well as its ability to get tangled around the plow or between the feet of the farmers, hence its Spanish names: ” quiebra arados” (=breaking plows) or “detiene bueyes” (=stopping oxen)

In English, spiny restharrow is formed by “Spiny” (because of the long spines of this plant ) and “restharrow” (from “rest” and “harrow =plough”). “Bugrane” comes from French, which comes from vulgar latin “boveretina”, composed of “bovis” (= ox) and “retinere” (=stop).

Naturally, at present, it does not present any problem for the power of a tractor, but it did not look like that in the past, so in many places it is known as: breaking plows,, parabuey, remora, in Portuguese “resta-boi” or in Basque” arrotuona “(= good to lift the plow) etc.

Common names in other languages

According to Spanish doctor and botanist Andrés Laguna (1499 – 1559), the scientific name of the genus “Ononis” comes from the Greek “onos” meaning “donkey”, because these animals feel a special appreciation towards this plant, which they use to scratch, to eat and to serve as toothpicks.

“Spinosa” comes from the Latin “spinosus= having spines” and refers to the thorns of its stems.

It blooms from June to September. It can be found practically throughout Europe, although it is rare in Scotland and absent in Ireland. It grows from sea level to 1800 meters in altitude.

Crawling or ascending shrub of the Pea family (Papilionaceae or Fabaceae) between 30- 40 cm high. Stems abundant and branched to the base, hairy on opposite faces with prominent spines.

Dark pink flowers, in pairs or isolated, with wings shorter than the keel. The flowers and the top of the plant stick slightly to the fingers when touching them, because they contains essential oils.

Fruits in legume longer than the calyx, in the form of ovoid pod, pendulum and very hairy.

What part of restharrow is used?

The part that has healing properties is the root. The roots of this plant should be harvested in autumn. Subsequently chopped and allowed to dry in the sun. Once dry, they have to be stored in plastic bags in a dry place.

Restharrow as an effective diuretic

The diuretic and anti-inflammatory properties of this plant, due to its richness in flavonoids, provide very interesting purification properties for the treatment of the following anomalies:

Remedies with restharrow in internal use

* Do not administer in serious infections or with symptoms like dizziness, blood in the urine, pain when urinating, etc (consult with the doctor previously)

Preparations with Ononis root for external use

At appropriate doses, no cases of toxicity have been documented

There are references of toxicity in animals. Specifically, cases of death by ingestion of the fruiting plant in nomadic lambs from western Sahara have been reported in this and other Ononis species.

Curiously, these plants do not affect sheep flocks that do not practice nomadic feeding, which become accustomed to this plant, so it does not produce toxic reactions.

More information on other plants.