Amino acids are essential for proper functioning of our body. The contribution of amino acids through food proteins must be constant because if this contribution is stopped, our reserves would diminish (mainly muscle) and we would present deficiencies.

What happens when there is a deficit of amino acids?

In this case, our body would use the protein of our muscles to meet the required needs causing malnutrition because of loss of muscle mass.

Clearly, not only we must achieve such intake of protein, but we must take into account that it is possible that, during some periods of life, some of these needs can be augmented by special situations, such as because of a disease. 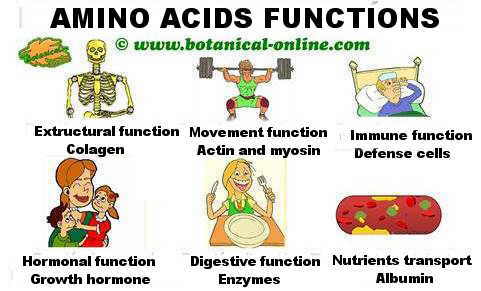 Summary of the main functions of amino acids in the body. Amino acids generally act together, forming peptides or proteins, and they exert different functions.

– Essential amino acids: They are the amino acids that the body can not synthesize and must be supplied in the diet. A non-protein diet or an inadequate one, without these nutrients, can cause deficit of these components.

– Nonessential amino acids: They are the amino acids that body can obtain from other amino acids or substances, peptides, own proteins, etc.

Attention !: Calling “nonessential” to an amino acid does not mean it has not to be supplied to our food, but this word only means that we can synthesize it from other, assuming that the contribution of other amino acids is sufficient. 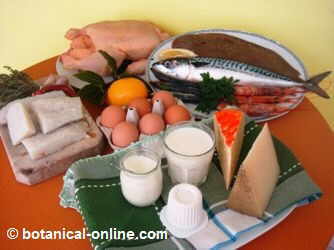 Limiting amino acids of a food

The limiting amino acids are those which are not in all foods in the same proportion as other amino acids and can generate a lack of these if food is not varied enough or nor well combined.

To make a good combination of foods we must consider what limiting amino acids this food has.

It is not necessary to eat at every meal all amino acids, both essential and and nonessential, but we should ingest all types of proteins in a balanced and varied way each day, if possible, in order to avoid shortages.

If we combine cereals with legumes, some deficiencies in a food will be compensated by the other food having the missing amino acid. With this, we will get an optimal nitrogenous input.

* Related Information: Problems with the essential amino acids in vegetarianism.

The importance of a good combination of these limiting amino acids, is that, if it fails even one of these amino acids, our body will be unable to synthesize all proteins containing that amino acid in its structure.

If so, it will not be only one type of protein, but many of them that will not evidently be complete, generating a series of functional, structural deficiencies, etc. which can lead a number of associated diseases.

What foods have the best proteins?

To assess the quality of the protein is taken as a reference the most complete product we usually consume, the egg. This contains all the essential amino acids for proper nutrition without generating gaps. After this food, other foods of animal origin such as meat, fish, milk and dairy products.

Plant foods, such as legumes and cereals, do not have all the necessary and complete contribution of these nutrients, as it has already been mentioned above. However, when both foods are combined, the balance is achieved (the amino acid lacking in a food is brought by the other). Besides, this combination also gives us another substantial advantage in respect to animal food: Fat in plant foods combinations is better than that of animal origin.

What are conditionally amino acids?

There are the so called conditionally amino acids. These are not considered essential until the person suffers an illness in which their needs are increased, either by greater catabolización of these amino acids or by absorption deficit. In both cases, it is clear that we will have to contribute with a greater amount to cover those needs.

What does it happen if we ingest too much protein?

The surplus resulting from excessive consumption of proteins are used as energy or excreted by the kidneys, so an abuse of their intake is not recommended, since it will lead to more unnecessary work for these organs. Amino acids that can not be digested are excreted by the intestines together with feces.

There are also called branched-chain amino acids, which make up most of the muscle structure and are intended to encourage power generation to perform protein synthesis correctly.

They also have influence at hormone levels, particularly in the brain hormones and chemicals involved in mood.

How are amino acids absorbed?

Amino acids are the structural units that form proteins.

Proteins that foods give us are not absorbed whole but, after ingestion, digestion starts within our body, “breaking ” them into smaller particles to be absorbed.

The body breaks down proteins into peptides and amino acids, which become absorbable and actionable by our body, nourishing it and giving it the ability to regenerate tissues.

This series of chemical and structural changes that proteins suffer to be digested starts from the stomach by enzymes such as pepsin and renin, but also by pancreatic enzymes as trypsin or erepsin in the intestines.

Throughout the entire gastrointestinal tract, these proteins will degrade and, subsequently, their amino acids will be absorbed into the blood until they reach the liver where they are processed and distributed throughout the body to perform its multiple and diverse vital functions.