Home › Food › Characteristics of legumes
This article was endorsed by Elisenda Carballido - Dietitian nutritionist. Postgraduate in Phytotherapy and master in Nutrition and Metabolism. 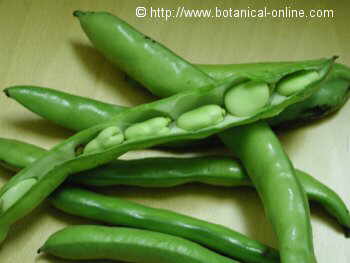 Legumes or pulses are the fruits of leguminous plants (Leguminosae or papilionaceae). Actually, a legume is a kind of pod shaped fruit, generally elongated, which opens in half, enclosing some seeds in each of the halves.

From a botanical point of view, legumes are considered dehiscent dry fruits, that is they open when mature. Legumes are derived from an unicarpelar ovary.

The shape of the pulses varies, but in general, they have long narrow shapes. The plants that produce them are mainly herbs, such as peas, although other times they can be shrubs as Spanish broom or trees like acacia. The size of the pulses is varied and can range from 1 millimeter to more than half a meter. (See list of legumes)

Many of the legumes are grown as food for humans, such as lentils or beans; others, such as locust beans are mainly intended for animal feed. Some, such as pulses of clovers, the fruits along with the rest of the plant, taks part of the forage that the cattle feeds with.

There are also vegetables that contain toxic principles and its consumption is poisonous, such as Crown vetch, a fairly common grass in the fields or along roadsides.

From the point of view of human nutrition, we can take profit of legume seeds as we do with lentils, chickpeas or beans. Sometimes we consume the pods that contain them, like in green beans. In this case, we consider them as a vegetable.

Sometimes, depending on the degree of maturation, we can consume both parts at once, such as in fava beans, or beans, whose fruits are eaten completely when they are tender

Legumes have constituted and constitute an essential nutrient in the diet of many cultures. Its importance in the Mediterranean culture has been of vital importance. Consider the role this food group plays within the so called Mediterranean Diet.

* Related information: Why to eat legumes?

Importance of legumes in agriculture

Legumes have formed, along with cereals, the first foods that sedentary people learned how to grow worldwide. The origin of legumes dates back to Neolithic times, with the birth of agriculture.

Inside the Egyptian pyramids, remains of lentils and peas with more than 7000 years old have been found. In Mexican archaeological there were remains of legume flour over 6000 years ago.

The first farmers-hunters learnt to recognize the value of these foods and their ability to complement each other. Legumes, like cereals, provided them with much energy by means of their carbohydrates, but legumes also posed a very important source of proteins that could supplement those provided by hunted animals or their own livestock. Legumes were also a perfect food for livestock. 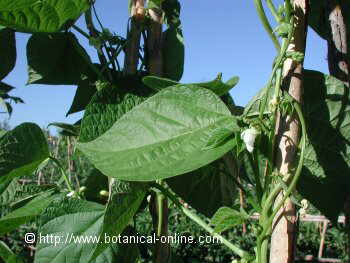 Photo of how to plant beans. The plants are supplied with a support, as canes, so they can climb. This increases production and facilitates the plant does not touch the ground to avoid many fungal diseases.

Legumes fertilize the soil where they are planted

Surely, in addition to recognize the nutritional properties of legumes, they realized the ability of plants producing legumes to enrich the soil where they are grown by nitrogen fixation.

This is possible because legumes contain in their roots microorganisms (rhizobia) that live in symbiosis with these plants. These plants provide them carbohydrates and microorganisms are capable of providing nitrogen in the appropriate manner the plant needs.

With all this, legumes become a naturally fertilizer for the soil where they are grown and allow other plants can be grown along with them or after them in places where no plant would have been able to develop before. For these reasons the ancient farmers cultivated cereals with legumes or planted cereals in fields where legumes had been planted before.

The cultivation of legumes is very old as it is usually set on 4000 BC Today, modern agriculture has recovered growing legumes as an ecological way to bring down nitrogenous fertilizer.

Given the importance of legumes in the history of agriculture, as food and forage, it is not surprising that the first historical traces of legumes date from the year 2800 BC that mention soy as basic food in the Chinese kitchen and as an ideal complement of cereals such as millet, rice and wheat.

Since Eastern religions forbid the consumption of animal meat, soybeans are imposed from the beginning as an essential crop in the East to supply the proteins that could not be obtained from meat.

In fact, in these regions soya beans are known as “flesh of the fields” or “beef from China”. From there, it was taken to Europe in the eighteenth century and America in the early nineteenth century.

The most widely grown legume worldwide

Today soybeans remains the most widely grown legume worldwide. China being the one that produces more soybeans for human consumption and the United States and Brazil the largest producers of soybeans for the production of animal feed.

However, the importance of this legume outside China as food dates only from twentieth century. A very recent contribution when compared to other legumes. For example, lentils and chickpeas were highly valued by the ancient Egyptians. The Romans also appreciated eating lentils and peas.

Other legumes come from America, such as beans, which were used in this continent by early civilizations. They come from the semi-tropical regions of South America, probably from the Peruvian Altiplano and Central America, especially Mexico. They were cultivated since pre-Columbian times, 8000 BC, according to remains found in the excavations of Aztecs or Incas, who were the people that refined most their cultivation.

Pre-Columbian people knew beans by the name of ayacotl and not only used them as food but as a bargaining chip which gives us an idea of ​​how important this plant was, along with corn, among these civilizations. In the sixteenth century, they came to Europe, constituting a true luxury dish for the wealthier classes.

From america also came peanuts, legumes grown in Peru 2000 BC At present China is the largest producer of peanuts in the world. We can eat the seeds of this vegetable, raw or cooked, or allocate its use in the manufacture of butter or peanut oil.

Alfalfa is widely used as other legume forage, although its use as human food germ is spreading every day. Alfalfa is also an edible plant. tender leaves of this plant can be eaten as a vegetable. Seeds, ground and roasted, can be used to produce flour to make bread. It is believed to come from the regions of Southwest Asia, where it is still in its natural state.

Alfalfa is thought to be one of the first plants cultivated by Man. The importance of this legume as a soil regenerator is very important.

Other legumes coming from the East 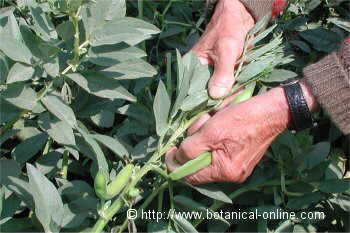 In the photo, detail of a farmer picking fava beans.

Fava beans are also from Asia, but they are naturalized and cultivated as food in many parts of the world.

Peas, in its wild form, have their origin in the East about 10,000 years ago. The first cultivation of this plant must be placed in the same area on the seventh or eighth millennium BC. From this point it spread to Europe and Asia. In the second millennium B.C. there are historical references of its cultivation in Europe and India.

Peas traditionally were not used for human consumption, but as cattle feed, in the form of tender plant and by means of their dry seeds. In the sixteenth century this plant began to be to used as food for Man. However, we must admit that most of peas produced in the world today are used for the manufacture of animal feed and only a small proportion is destined for human consumption.

It is unclear the real origin of lentils although some historians place it in the Far East, south-east Turkey and northern Syria where it seems to be gathering along with other wild plants such as oats. It seems that in these areas even today you can find the species in the wild (Lens culinaris subsp. orientalis).

In Turkish archaeological remains (excavations Halicar) cultivated lentil seeds have been found about 5500 BC, but the oldest remains of their cultivation date back to 6600 BC and they have been found in Israel which makes them one of the oldest foods cultivated by man with almost 9000 years old. The Egyptians fed workers of the pyramids with lentils.

Do you know what lupins are? 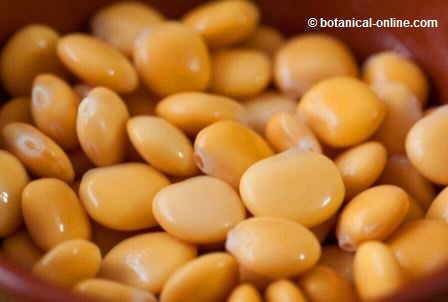 Lupins ready to be consumed

There are some legumes that some people hardly know. Lupins, for example, are a type of vegetables many people have never heard about them.

Most of them are destined for animal feed and as ornamentals, although there are species whose flat seeds can be consumed by humans after subjecting them to a bath of salt water for at least 12 hours to eliminate them toxic alkaloids.

Some species of lupins were known in America during the Mayan civilization where they were used as human food.

We also know that the Egyptians consumed them 2000 years BC.

The largest producer of this vegetable is now Australia.

How to cook legumes