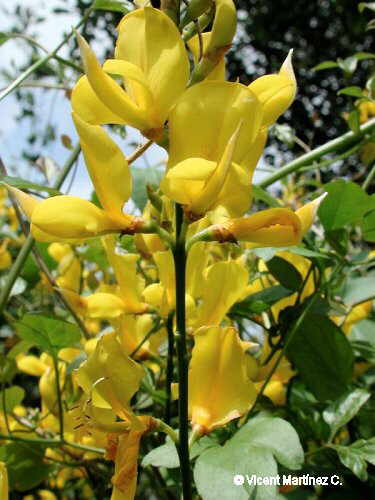 Habitat: Native from South Europe, it appears in grasslands and dry field margins, but it can also be found as a cultivated shrub in gardens or by the side of the roads. In the second case, to prevent slopes being eroded.

– Alkaloids: Mainly cytisine and sparteine together with genistein and isosparteine

Cytisine becomes hallucinogen and stimulant of the respiratory track. It is highly toxic, resulting lethal in a superior dose of 5 mg. Other plants where this component can be found are: Ulex europaeus or Genista tinctoria.

Sparteine contains abortive, antiarrhythmic, cardiodepressive, diuretic and hypoglycemic properties. Consequently, it exerts a relaxing function in cardiac muscle although it can be considered very poisonous. It is even used as insecticide. It appears in less proportion in other plants as Cytisus scoparius and Aconitus napelus, the last one being considered one of the highest poisons in the world.

In a lower dose, genistein can also result abortive, fungicide and anticancerous.

Active parts: The whole plant (cytisine, sparteine), but specially the flowers and seeds. The flowers are very rich in scoparin and genistein is mainly found in young shoots.

Spanish broom has been used as diuretic and laxative. Diuresis or water elimination of the body is produced by the action of scoparin on the renal mucosa.

Sparteine is used as a heart tonic, although the quantity of this product contained in the plant is so high, that Cytisus scoparius, with a lesser content, is being used instead.

Antidote against vipers. In some places in Africa the decoction of the peeled branches is used to counteract viper bites.

In high doses, this plant becomes very toxic by diminishing the pulse rate to such low levels that it can become lethal, so it is not advised to use this plant to prepare home-made remedies.

Industrial use of spanish broom

-Flowers of Spanish broom are used to produce yellow pigments.

– Fiber is made with its bark to manufacture ropes and clothes.

– Bees use its flowers to make honey.

Extreme in case of going over the allowed levels.

Symptoms of poisoning with Spanish broom can cary depending of the ingested amount: