Uses of millet as food

Millet has a neutral and soft flavor, slightly reminiscent of butter, although its sweet smell remembers wallnuts.

Millet tolerates a wide range of cooking ranging from boiling to frying in the oven, but it can also be eaten raw.

Multiple elaborations can be performed with this cereal, both sweet and savory, such as:

Is millet good for infants?

Millet flour is not commonly used for feeding infants, although pure foods from this cereal are also made.

How to cook millet? 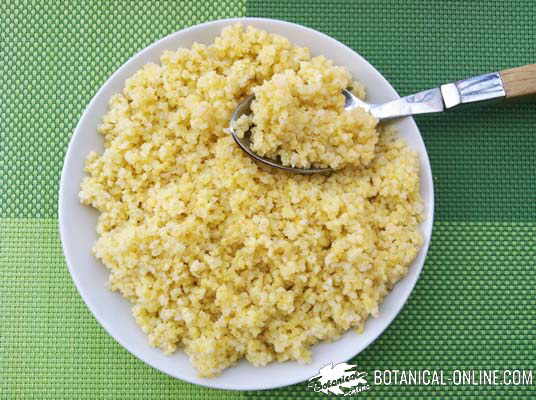 To cook millet, it is preferable to pour water twice the desired amount of raw millet and pre-wash it prior to cook to remove impurities.

Cooking time varies from 20 to 45 minutes.

It has a very high density, if density is desired to be decreased and a lighter preparation to be made for consumption, millet can be mixed with other lower density cereal.

How to preserve millet?

Millet conservation depends on the type of product obtained from this cereal we want to keep:

Elaborations made with millet

– A cereal in the diet for coeliacs

– Millet bread: If bread is only made with millet, it does not contain gluten. Consequently, it does not rise, getting a very dense texture, like a low-rise cake. Usually, if volume is desired, it will have to be combined with some other cereal that has gluten, such as wheat.