What is arachidonic acid?

Arachidonic acid or AA is a 20-carbon fatty acid characterized by the presence of four double bonds. Its chemical nomenclature is C20: 4.

Arachidonic acid is classified in the group of polyunsaturated fatty acids of the omega 6 series.

The molecular formula of arachidonic acid AA (C20: 4) is as follows:

Properties of arachidonic acid or AA

Arachidonic acid is formed from the excess of linolenic acid (omega 6), a type of fat found in seeds, vegetable oils and nuts.

Foods fried in vegetable oils, margarine, pastries, chips, snacks, and products made with vegetable oils, are very rich in linolenic acid, which the body transforms into arachidonic acid.

From fatty acids, the body synthesizes substances called eicosanoids, such as prostaglandins, thromboxanes and leukotrienes. All eicosanoids are vital for a proper function of our immune system, as they interfere with inflammation and blood coagulation systems.

Not all eicosanoids have positive effects on the body.

Eicosanoids that are produced from arachidonic acid are series 2 and, in excess, have highly inflammatory, vasoconstricting and platelet aggregating effects in our body.

Balance between omega 6 and omega 3

Fatty acids of the omega 6 family and those of the omega 3 family must remain in balance so that they act beneficially in our organism. The balance between them in the diet should hold a ratio of 3: 1 respectively. If the proportion of omega 6 is higher, will occur the effects cited, contrary to those of omega 3, due to the excess of arachidonic acid that would form.

Since they are polyunsaturated fatty acids and because of their composition, they are more susceptible than other types of fatty acids to become rancid because of oxidation. It is considered advisable to make a contribution of about 200 mg of vitamin E, which thanks to its antioxidant effect, prevents the occurrence of such oxidation reactions prematurely.

It is considered that a correct consumption of fatty acids of the omega 6 family is a good method of prevention against the appearance of pathologies very common in our society, such as cardiovascular ones.

They have a high degree of tolerability in regard to their digestion and they are absorbed very quickly, in our body. 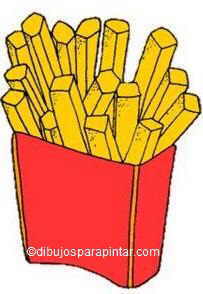 Drawing of potato chips in vegetable oil. Vegetable oils (sunflower oil, soya oil, rapeseed oil, etc.) are rich in linolenic acid. The excess in the diet of this type of fat is transformed into the body into arachidonic acid.

Actions of omega 6 in our body

– They are essential for proper formation, regeneration and maintenance of the structure of cells, tissues and organs, such as the brain and eyes of our body.

– They reduce the risk of suffering vascular and cardiac pathologies. But, they interfere with other levels than omega 3.

That is, omega 6 fatty acids, prevent cardiovascular diseases, thanks to its regulatory actions, such as the regulation of blood pressure, which reduces the risk of arrhythmias and hypertensive states, the regulation of insulin levels, the availability of oxygen in the blood, etc.

– For its structural effect: In pathologies or skin alterations, to regenerate the tissues correctly, as for example desiccation and scales of the skin. To prevent poor structuring and formation of tissues and cells at a visual and cerebral level.

– For its hypotriglyceridemic effect: In diseases where triglycerides and LDL or VLDL cholesterol are elevated, such as in cases of overweight, obesity or high levels of “bad cholesterol”.

– Because of its vasoconstricting effect and platelet aggregation: When there is a risk of bleeding.

It is possible to make an intake of AA directly, either with supplementation or through food. But we must bear in mind that these fatty acids, when found inside the food, prove to be more bioavailable and therefore better and more easily absorbed and used by our body.

Some AA-rich animal foods include:

– Meat fats such as pork or, to a lesser extent, poultry fat.

– Among the foods of plant origin we have Brussels sprouts, garlic or carrots

An excess in arachidonic acid intake can be harmful, as it can cause:

– An increase in inflammation of our body and therefore an increase in pain. Especially if there is any pathology that by itself, is already inflammatory.

– A vasoconstriction and platelet aggregation that can lead to excessive clots that lead to thrombosis.