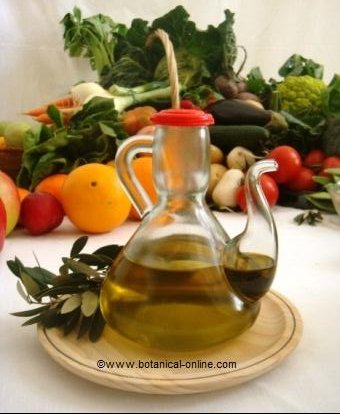 Photography of olive oil. Olive oil is the most important source of oleic acid Omega 9, and is the most abundant fat in the Mediterranean diet.

Omega 9 are monounsaturated fats found in foods of animal and vegetable origin.

Unlike omega 3 and 6, Omega 9 is not an essential fatty acid because the body can manufacture it from other substances, such as carbohydrates.

Scientifically, omega word means that the molecule has one unsaturation, which is known as double bond between atoms.

Omega 9 refers to the double bond being in the carbon 9 of omega position (ω-9).

In nature there are mainly three types of omega 9 fatty acids:

Oleic acid is a fatty acid with 18 carbons. Abundant in the Mediterranean diet, distinguished by the consumption of olive oil.

Omega 9 fats have played a prominent role in research on the prevention of cardiovascular disease, benefits that have been proven by its consumption.

Oleic acid has become synonymous with omega 9, although there are more types of omega 9.

How to obtain oleic acid

Omega 9 can be found in avocado oil, argan oil, acai fruit, olives, avocado, horchata, chia seeds, groundnut, among other sources. However, the most affordable way to obtain omega 9 is through olive oil.

These sources of omega 9 provide additional health benefits because, in addition to omega 9, they contain vitamin E, flavonoids and important medicinal properties for the body, as in the case of extra virgin olive oil.

Gadoleic acid is a type of fatty acid with 20 carbon atoms.

We found for example in white mustard, pine nuts, pistachios, poppy seeds, ginger, rye; and, together with oleic acid, in peanuts oil.

Erucic is a fatty acid containing 22 carbons. This is kind of toxic fat and oils rich in this component are not considered fit for human consumption.

The erucic acid is very abundant in the seeds of cruciferous vegetables, such as mustard, rapeseed, mustard oil or canola oil.

In fact, due to the toxicity of erucic acid, initially extracted from rapeseed oil, was not considered suitable for human consumption. By means of improving canola, rapeseed emerged, which is technically a registered name comes from the acronym: Canadian oil low acid.

Canola is a variety of rapeseed with standardized erucic acid and glucosinolates content, suitable for the production of edible oil.

More information on omega 9 and other fats.