Characteristics of the metabolism

How are simple carbohydrates divided?

Among the major simple carbohydrates belonging to monosaccharides we have the following: 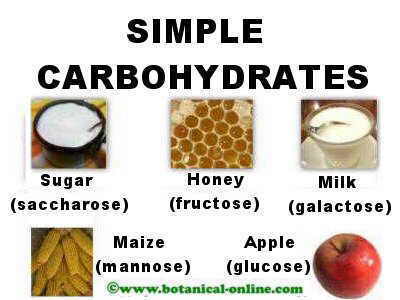 Some food with simple carbohydrates

For this reason, it is advisable to use this as a sweetener instead of “normal” sugar since it requires less quantity to get the same taste, and with fewer calories. Like glucose, it is ingested directly. It has also been used as sugar for diabetes because it was assumed that it did not stimulate the production of insulin. (More information on fructose)

Galactosemia occurs as a result of the lack of the enzyme galactose-1-phosphate uridyltransferase which prevents galactose or milk sugar being digested. This causes an excessive accumulation of it in the body.

It affects infants within a few days of birth. At first , they did not show problems, but then begin to show symptoms of this metabolic disorder, jaundice, vomits, poor weight gain, enlarged liver, etc.

Among the major carbohydrate belonging to disaccharides we would include the following:

From a dietary point of view its abuse has been linked to the onset of many disorders, such as decay, obesity, gout, cardiovascular problems or diabetes. (See foods high in sucrose)

As people get older, the production of the enzyme lactase decreases and it is more and more difficult to digest lactose. This can cause problems of malabsorption or intolerance, which may be the cause of many problems of abdominal pain, gas, diarrhea and other symptoms related to a poor digestion of milk.