Carob tree in natural medicine and in food

Carob tree (Ceratonia siliqua L.) is a tree very typical of the Mediterranean region, that for centuries has been cultivated, mainly, for the obtaining of its fruits (carobs o carob beans), but also for the ecological importance that it has in dry land.

The fruits of the tree, carobs or carob beans, were used and are still used as food for animals, such as pigs or horses, for which the carob is an exquisite sweet.

These fruits have also been used for many years in human food, although, as with the consumption of many wild plants, it was considered food for the poor, as it was eaten mainly in rural areas.

In the subject that we are dealing with in this article, in natural medicine, carob has been used as a remedy for diarrhea and for constipation. Carob porridge cleans the intestine at the same time as it feeds and nourishes.

In both home remedies and food, carob tree is mainly used in the form of carob flour, which is obtained from the grinding of carob beans (mature pod and dried seeds).

Carob flour contains whole fruits, with some seeds. Therefore, it is rich in sugars and fiber (insoluble fibers are more abundant).

There are also traditional remedies described with the bark of the tree, which are discussed below.

Carob flour is very useful for shortening the time of diarrhea due to the astringent action of its tannins. It helps stop diarrhea, especially in cases where it is caused by bacterial infections, such as salmonella, by parasites or intestinal worms.

It is also interesting the prebiotic effect of the fibers of the carob, because they are fermentable and help to improve the fermentative intestinal flora.

Since the time of our grandparents it is well known that, for children and adults, carob porridge clean the intestines at the same time as they feed and nourish.

How to prepare carob porridge for the belly?

An amount of about 50 g of carob (approx 4-5 tablespoons) per liter of water or rice vegetable drink is used. Dissolve in the cold and cook until thick.

In children, it is advisable to use smaller amounts and increase progressively. Optionally it can be sweetened with molasses or sugar, or prepared with oats porridge, raisins and fruit.

* More information: Recipes with carob in the listing above

Carob as a help for intestinal infections

Carob is a well-known remedy highly recommended by pediatricians. In one study, a carob slurry and a placebo were given to a group of 41 children with bacterial and viral childhood diarrhea. For children who ate porridge with carob flour, diarrhea lasted 2 days less than children taking placebo.

More current studies have shown how carob helps to cure various intestinal infections, such as schistosomiasis or bilharziasis (Schistosomiasis). (Use as an adjunct to medical treatment)

Carob for the liver

Specifically, the use of carob extract as a adjuvant to a treatment of an intestinal infection (schistosomiasis), was seen to reduce the damage that this infection caused in the liver, reducing liver fibrosis.

Therefore, carob is presented as an excellent remedy for parasites, intestinal worms and all kinds of infections that affect the digestive tract and that can affect the other organs.

How to prepare carob porridge?:

Dilute 2 teaspoons of carob flour in half a glass of cold rice vegetable drink. Heat a glass of rice drink and add to the diluted carob flour. Heat until thickened. Optional: sweeten with raw honey)

Because of its phosphorus and calcium content, carob meal is also recommended for people with osteoporosis or bone problems. If we look at its content per 100g, carob contains more calcium than milk.

Per serving, a couple of tablespoons of carob flour (20g) contain 70 mg of calcium, which supposes a good contribution of this mineral. It also contains other minerals and trace elements important for bones, such as magnesium, phosphorus, potassium and boron. (Introduce carob flour in food) 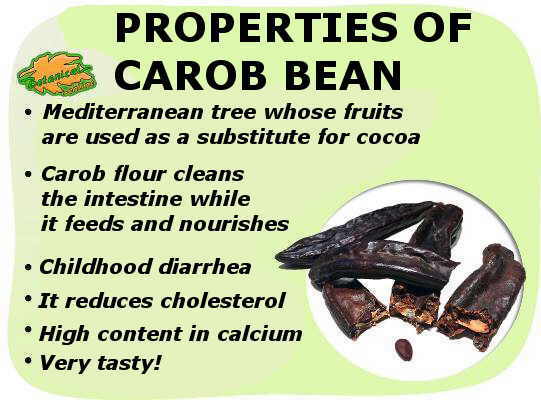 Main medicinal properties of carob flour and its benefits in natural medicine. Photo of carob beans and seeds

It has been shown that a diet high in fiber, such as the carob contains, helps lower cholesterol levels. This effect is achieved by capturing among its fibers part of the cholesterol and fats found in the intestine, dragging it and removing it from the body through the feces.

How much sugar has carob flour?

Carob flour contains 90% carbohydrates, of which about half are simple sugars (45%), and the rest are complex carbohydrates. In homemade measures, 1 teaspoon of carob contains 4 g. of sugar.

It should be mentioned that carob has other sweetening substances, such as pinitol, that do not affect blood sugar. That is, carob provides more sweetness than sugar, without raising the glycemic response (blood sugar), thus being a good choice sweetener.

Diabetics can add a couple of teaspoons of carob in yogurt, toast, muesli, porridge, milk, vegetable drinks or desserts, to benefit from the properties of this Mediterranean vegetable.

Scientific studies have shown that carob flour has a low glycemic index, that is, the sugars it contains are slowly assimilated and, therefore, it does not produce hyperglycemia nor is it likely to produce blood imbalances.

Carob tree bark has a high content of tannins with astringent properties. When we use the bark of the plant, very rich in tannins, its properties are reversed becoming a good remedy for diarrhea. (Decoction of 50 gr. of bark per liter of water, 4 cups a day.

Carob seeds are very rich in mucilages, a type of fiber with capacity to hydrate and to increase its volume much, when they are taken with abundant water. This property is used in slimming diets to increase the feeling of fullness in the stomach and help you eat less. (Take capsules of locust bean gum or carob gum, 1-1.5g at each meal, with a good glass of water)

The seeds, very rich in mucilages and other fibers, and pods, especially when they are green, are ideal in case of constipation due to its laxative effect. (Decoction of 30 g of carob seeds flour per liter of water for 30 minutes, paste and take the desired amount) (Carob seeds flour capsules as indicated in the package leaflet)

Differences between carob and cocoa