Functions and benefits of cystine, a nonessential amino acid

Cystine is a nonessential amino acid that the body can obtain from other amino acids. Cystine is a dimer of two cysteines, therefore there is a relationship.

Its abbreviated form is Cis.

It is a sulfur-containing amino acid.

Cystine is an amino acid with detoxifying effect because of its facilitating effect on the elimination of toxic substances.

It has a high sulfur content which is indicated for skin disorders because of its effect on the metabolism of the skin, that, as a ressult of a deficit of this mineral, may have disorders such as acne, dryness, eczema and even in cases of psoriasis,

It also has beneficial effects in nail problems and brings health to the hair in cases of excessive loss of it.

It also has functions in stimulating insulin production, which helps maintain balance with glucose, our main source of energy. Therefore it is useful in preventing diabetes.

No contraindications have been described in cystine, since it does not create problems of intolerance or overdosage.

However, cysteine ​​is associated with some pathologies affecting the kidneys. The principal is a disease called cystinuria, which occurs due to an imbalance of genetic origin on both parents, without any preventive solution. Cystinuria produces kidney stones.

Also, because of an accumulation of cystine, we can suffer cystinosis, which produces crystals that can accumulate and affect various organs of our body, but mainly affects sight.

Therefore, it is not recommended a high intake of this amino acid in these diseases without medical supervision. 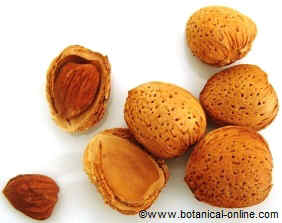 Animal foods are those that contain more cystine, for example, viscera

Within plant foods, we include, for example, almonds or mustard seeds

Although you can take supplements of cystine, it is recommended to meet the needs of this amino acid through a balanced diet. If supplementation is necessary, consult with the specialist before taking it.