How to take lipoic acid

Is lipoic acid good for the kidneys?

Alpha-lipoic acid, also known as thioctic acid or lipoic acid, is a substance naturally present in our body that is being investigated for its potential benefits on different degenerative diseases that affect the nervous system, such as Diabetic neuropathy, Alzheimer’s and multiple sclerosis. 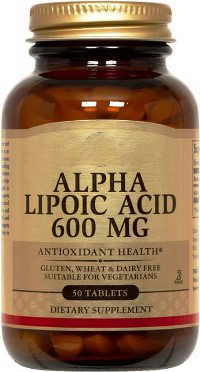 Multiple sclerosis (MS) is a neurodegenerative and demyelinating disease that affects the entire central nervous system. The pathogenesis or factor related to this disease are the high levels of oxidative stress and inflammation of the nervous system.

As confirmed by scientific studies, this supplement is neuroprotective and anti-inflammatory, with powerful antioxidant properties. It is said to be much more potent than other antioxidants known as vitamin C or vitamin A.

Role of lipoic acid supplements in the treatment of multiple sclerosis

More and more patients read about this supplement, which combined with drugs, can improve the symptoms of multiple sclerosis, its evolution and prognosis. In this regard, numerous reference associations in the treatment of this disease have pronounced on the uses of this therapy. Certainly, it is a promising supplement with very few contraindications, although there is still much to investigate.

It should be mentioned that the possible benefits of taking this supplement do not make sense without a healthy, appropriate treatment, diet and lifestyle for multiple sclerosis.

Scientific studies in animals about lipoic acid and MS

There are several studies in the medical literature on lipoic acid. In vitro studies have shown that lipoic acid decreases the pathogenic permeability of the blood brain barrier in experimental animals of multiple sclerosis (with experimental allergic encephalomyelitis, EAE) avoiding the passage of T cells, which cause brain degeneration. Others show that phagocytosis or destruction of myelin decreases with decreasing free radicals (neuronal antioxidant). All this implies less cerebral atrophy.

Due to its neuroprotective role and its good response in experimentation, lipoic acid can be investigated for future therapies of MS in humans.

Lipoic acid is administered with good results for the treatment of diabetes complications, as it is very useful for reversing nerve fiber damage due to diabetic neuropathy. This is because it has a neuroprotective, antioxidant and anti-inflammatory effect on the nervous system.

In people with multiple sclerosis, lipoic acid supplements have been shown to improve the biomarkers related to the disease (it inhibits the activity of MMP-9 and prevents the passage of T cells to the brain).

A very important study on the subject (of the most commented on lipoic acid and MS) concluded that, after 2 years of supplementation, lipoic acid reduced 68% the rate of annual cerebral atrophy in secondary progressive multiple sclerosis (the loss of cerebral volume is associated with loss of mobility, motor functions and disability due to MS). The safety, tolerability and compliance with treatment are favorable for further research. 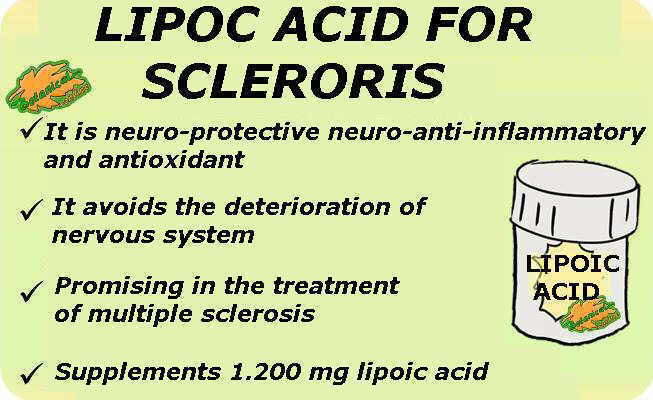 Medicinal properties and possible benefits of supplements with alpha lipoic acid for multiple sclerosis. There is still much more research to be done, although the first studies are quite positive.

Sources of lipoic acid for MS

Lipoic acid is a substance that occurs naturally in the body, which is found in food, and can also be produced in laboratories for supplementation. Only in the form of supplements is it possible to obtain large amounts of this component that requires MS therapy. It is advisable to buy supplements that contain a type of acid called alpha lipoic acid, which is the form that has greater absorption and benefits for the body.

How to take lipoic acid for multiple sclerosis

Chemically, alpha-lipoic acid (ALA) has a chiral central carbon and therefore has the S or R isomers. When a supplement is not specified, it means that it contains a racemic solution with both types, while there are also supplements of R-ALA and those bound to sodium (Na-R-ALA). Some studies indicate greater availability of R-ALA, although it is also suggested that age is another determinant of bioavailability of this supplement, and that absorption is higher in women than in men. For all these reasons, differences between individuals and different responses in therapy can be expected.

It is recommended to consult with the specialist, who will advise you personally and based on your valuable clinical experience. The usual dose is about 1,200 mg daily of supplements of R-alpha-lipoic acid (R-ALA), divided into 1 or 2 doses.

Alpha lipoic acid supplements can be found in pharmacies (usually by order), herbalists and specialty stores. Dosage supplements containing at least 300 mg of lipoic acid per dose should be sought and 1,200 mg taken daily.

If you are looking for information on how to improve multiple sclerosis, it may be useful to consult the dietotherapy section. It is not known if feeding, by itself, can cause multiple sclerosis, since there seem to be other related factors. However, given the role of diet in the autoimmune response of the organism, it is very possible to assume that diet and lifestyle have a very important role in the evolution and prognosis of the disease, at least, as symptom trigger.

All dietary protocols for multiple sclerosis completely eliminate ultra-processed food, gluten and dairy products and add vitamin D supplements and foods rich in omega 3 daily. There are very successful cases, one of the best known is the one that appears in The Wahls Protocol, a book written in first person that tells how Dr. Wahls, diagnosed with multiple sclerosis, managed to improve her disease with this type of diet, among others. important changes of exercise, open air and stress management.

There are other protocols, besides Wahls, such as the Swank (diet low in saturated fat, without dairy and with supplements of fish oils and vitamins) and Jelinek (like the previous one, with meditation and linseed oil).