Mosquitoes are small insects equipped with a pair of wings and a mouthpiece transformed into a kind of trunk, prepared for suction.

There are other dipteran insects similar to mosquitoes but they do not sting, as is the case of chironomids, similar in size to the true mosquito but with very hairy antennas or the typical ones, much larger than mosquitoes.

Mosquito larvae are aquatic and are totally dependent on water to develop.

Mosquitoes form swarms composed of males. They are the ones who carry out mosquito dispersal flights in search of a guest to give his blood or to allow the propagation of the species.

Depending on the species of mosquito, the ability to fly is different. Culex pipiens remains in place as conditions are favorable, while Ochlerotatus caspius makes long travelling windblown.

Mosquitoes bite particularly at dawn and dusk; some mosquitoes, as Culex modestus, can feed on blood during the day,though.

Mosquitoes do hibernation even in mild winters. For this reason, mosquitoes take refuge in basements.

It is a characteristic the mosquito-pitched sound, emitting constant and annoying as it flies in the silence of the night. 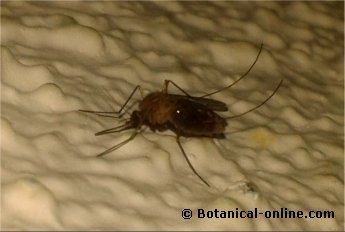 Photo of female mosquito filled with blood. When the mosquito finishes biting a person his abdomen swells, he becomes plump and loses flight capacity

Why do female mosquitoes bite people?

Each species of mosquito has a preference for the host on which they feed. For example: 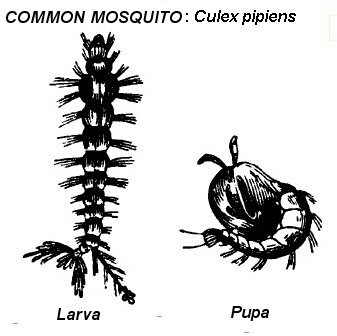 A mosquito has a complete metamorphosis, going through the phases of egg, larva, pupa and adult

The larval stage lasts 10 days. The nymph stage is shorter than the larva, about 3 days.

When the female mosquito sucks blood, it tooks refuge in a safe shelter for the total development of the eggs.

The number of mosquitoes that lay eggs depends on each species, but also on the amount of blood that has been taken.

Where does a mosquito live?

The mosquito lives in areas with standing water. It needs these places to lay its eggs.

Problems that mosquitoes cause

Some mosquitoes can transmit diseases to animals.

Written by Vicenç Martínez Editor specialized in animals and nature.