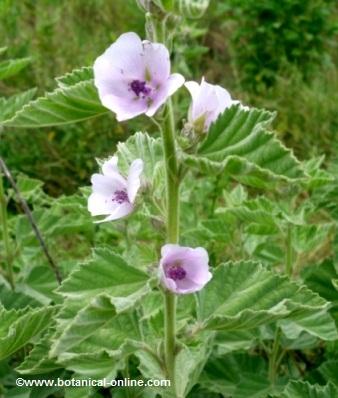 Photo of marshmallow leaves and flowers

Habitat: It grows in most of Europe, in humid places hence its English name of Marsh mallow (Its name meaning a type of mallow that lives in marshes). It also appears in brackish seaside land in ditches and wet meadows.

Particularly abundant in the Caspian and Black Sea and the western Asian steppes where it looks like it comes from. It can also be found in North Africa and in the northeastern United States where it has been adapted after being imported as a garden plant. 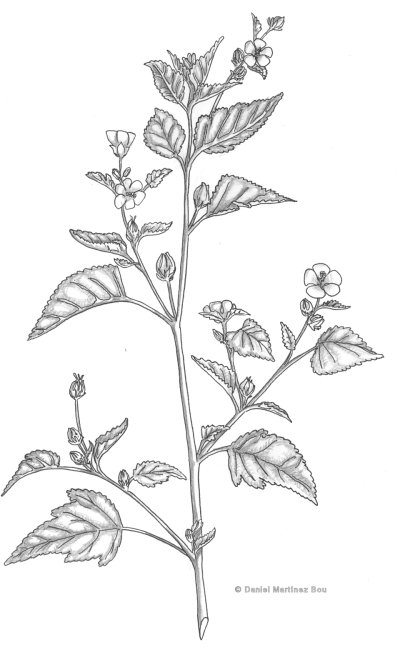 Perennial plant of the mallow family up to 2 m tall.

Simple or usually multiple, round and strong, annually renewable woody base stems which arise from a fibrous root, elongated cone-shaped, with white flesh inside and the outside yellowish, penetrating deep into the earth.

Flowers showy pink or white, often white-pink, clustered in groups of up to 3 racemes, shortly stalked.

Fruit with a single seed.

Marshmallow is one of the most important emollient plants. This property is very useful to soften, protect and hydrate the skin mucous.

Its curative value results from the capacity of its components to prevent evaporation of water so that it makes a sort of layer or film on the skin which causes it to remain more hydrated. Paraffin, starch and mucilage are the major components that would provide this property.

Marshmallow is also one of the best demulcents, which are substances that are are able to relieve irritation of mucous membranes. The demulcent properties of this plant are granted by its richness in mucilage, pectin and sucrose.

Their sugar components, especially mucilage in contact with water, form a kind of protective paste, like jelly, that cures or prevents inflammation and relieves pain at the same time producing an environment where microorganisms can not thrive.

These properties have already been widely recognized over 2000 years ago by the wide use of this plant as well as medicinal plant for its nutritional properties.

Collection and preservation of marshmallow

All mallows have, in general, the same medicinal properties. Of these the richest in mucilage is marshmallow which is most often used today for the richness of this component in its root.

Other similar mallows can be used with similar properties. In this case, instead of the roots, their flowers or leaves, or all they simultaneously, are used. There are numerous species of mallows. Among them, we can point out the following: 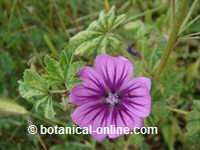 In natural medicine, Red flowers are used primarily with similar properties to common mallow or marshmallow.