HOW TO GROW SWEET POTATOES

– Tuberous roots of different shapes and colors depending on the variety grown. The skin and flesh can be white, yellow or orange (because it contains carotene).

– Leaves simple, petiolate, ovate or cordate and margins entire, toothed or lobed (depending on variety).

– Fruit a dehiscent capsule, round, inside which contains between 1 and 4 seeds. Sweet potato is a beneficial food in type II diabetes, as demonstrated by scientific studies.

There are mainly two types of sweet potatoes: those varieties of white meat, and those with orange tones.

– The white-fleshed varieties have a higher starch content and lower sugar content. Also known as “rabbit hutches”, their skin is red or white. From a sensory point of view, they are slightly sweet and nutritionally more energetic than the orange varieties.

This type of sweet potato is native to the U.S., where it is grown mainly in South Florida. Within these varieties, the best known are Creole or Manteca Blanca (white meat) and Brazilian White (creamy flesh)

– The purple-fleshed varieties offer features similar to those above, but with a higher content of anthocyanins. It is worth mentioning the variety Violet (purple smooth skin, flesh pink).

– Plant native to northwestern South America, adapted to tropical and subtropical climates. Currently its cultivation has been spread by the most temperate world. It is believed that its precise origin is between Peru and Ecuador, and it is in these countries where there is great diversity of types of sweet potatoes.

– Cultivate in full sun. It is a short-day plant, requires 11 hours of sunlight a day to bloom.

– It is Not resistant to frost.

– Windproof, due to its size creeping. 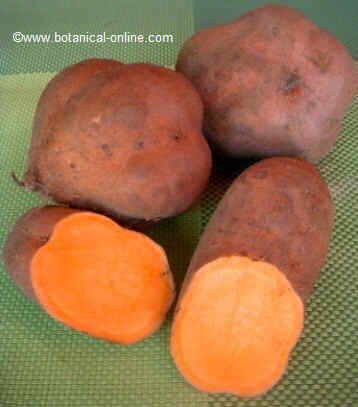 In the image: sweet potato tubers

– Preparation of soil for growing potatoes: the seedbed should be completely soft to facilitate root development. The compact ground, instead, the thickening thereof difficult. It is therefore desirable to remove the soil with a plow at 30cm. deep.

Sweet potato can be propagated by cuttings or by tubers.

– Cuttings consist of transplanting a stem of a vigorous plant, to take root and form a plant identical to the previous one.

– It is made from vines or creeping stems of the plant. Only used in hot climates, where the climate allows year-round vegetation.

– We will choose a branch that is neither too young nor too old. We must note that it has not damage, spots or pests.

– The stem chosen should possess at least 3-4 buds.

– Tubers are planted directly in the ground. Small tubers are unsuitable for commercial use, so they are used for propagating the plant. You can also use large sweet potatoes, split into 4 parts.

– Generally, planting is done during April and June. In warmer climates, it can be chosen any time of year. During the dry season, provide them with abundant irrigation.

– The tubers should be clarified when the plants have grown from 3 to 6 cm. We must ensure that the soil is wet to get the plants with little effort and be careful not to damage the remaining buried ones.

– Five or six months after planting, you can begin collecting sweet potatoes, usually during the months of October and November.

– It is recommended not to exceed 30 liters per plant and week.

– You should decrease irrigation one month before harvest, for quality of tubers, and to prevent decay.

– Earthing up: This involves covering the tubers that are discovered (as they would turn greenish) and facilitate root aeration.

– Weed control: in all crops, weed control should be almost perfect before wild herbs interfere with cultivation. Sweet potatoes are poor competitors with weeds, which reduce yields and interfere with harvest.

– Control of plant development: Main branches should be sprouted to prevent excessive plant growth, and encourage production of tubers.

– It is important for the soil to be rich in organic matter for better soil fertility and higher water retention capacity.

– Sweet potatoes require a generous contribution of potassium to favor the thickening of the tubers.

– However, excessive nitrogen fertilization causes great development of the shoot, but smaller tubers. 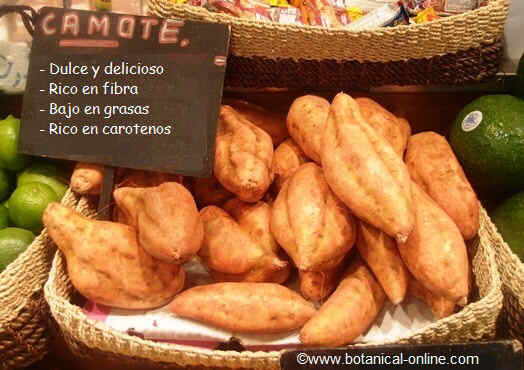 In the picture: potatoes exposed in a local Spanish market. Only larger tubers come to market.

– The time to harvest the tubers takes place when the plant leaves begin to lose its dark green color and when the soil begins to crack.

– It is done with the help of a hoe or pickaxe.

– It consists on digging up the plant to find the tubers buried in the earth.

– They are classified into three piles: tubers unfit for consumption (bigger and larger), the “batatillas”, and the “rejected” ones., called “short ends”.

– The sweet potatoes, called “batatillas” are lightweight tubers that are intended for planting the next crop.

– The short ends are potatoes that are damaged by tillage tools, by decay or disease. Tubers under 110g.are also classified in this group

– Sweet potato or yam should not be exposed to the sun, as dehydration shortens shelf life.

– Sweet potato weevil: caused by Cylas formicarius. The larva enters the tuber, feeding on it and affecting the entire plant.

– White worms: They produce mounds of soil around the plant, consuming the tuber, with galleries within.

– Horn worm: caused by Erinnyis spp. Worm that feed on the leaves of the plant.

More information about sweet potato in the listing above