Home › Food › Properties of buckwheat
This article was endorsed by Elisenda Carballido - Dietitian nutritionist. Postgraduate in Phytotherapy and master in Nutrition and Metabolism.

Unlike what it may seem by its low popularity in Western countries, this unique and nutritious grain has a huge range of medicinal properties.

In rural areas of Japan, where the consumption of leaves and buckwheat grains is usual, it has been reported a very low incidence of cardiovascular diseases.

These properties are corroborated by recent studies about the properties of routine, a flavonoid abundant in buckwheat leaves.

Furthermore, as discussed below, buckwheat has a fundamental role in preventing and treating obesity and diabetes, conditions normally associated with cardiovascular diseases.

Buckwheat in the prevention and treatment of obesity

Buckwheat is a source of rutin, flavonoid that helps maintain low cholesterol levels and control hypertension.

One study showed that animals fed with buckwheat flour had lower cholesterol levels than the group that was not fed with this food. Also found lower incidence of gallstones and lower body fat in subjects who ate buckwheat flour daily.

Also more and more research is done to use buckwheat to control appetite due to its content in fagomine. Moreover, this grain has the same amount of fiber than whole grains, with the extra benefits that gives the routine. In addition, this fiber helps in the proper absorption of carbohydrates.

In a 2005 study, it was showed that people who ate buckwheat were more satisfied after eating it than when eating cereal. 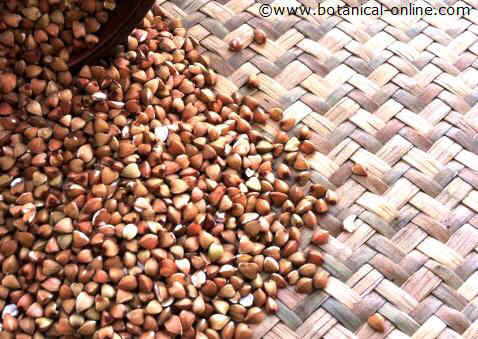 Medicinal properties of buckwheat for diabetes

Buckwheat flour contains an imino sugar (a molecule formed by the chemical group and a sugar imino) called fagomine. The fagomine is a potent inhibitor of glucose uptake, whose administration reduces the glycemic index of carbohydrates and consequently reduces appetite.

Clinical research has been conducted in 75 patients with diabetes following a diet rich in buckwheat. The results of these observations showed a decrease in the level of blood sugar and better control of diabetes.

This molecule is already patented by the National Research Council (CSIC) and calculated that in a very near future, fagomine will be used for the development of functional foods for the control of diabetes and obesity.

Buckwheat is one of the grains with most complex carbohydrates that occur in nature. Buckwheat contains more than 70% starch, which together with soluble and insoluble fiber, are slowly absorbed carbohydrates, thus providing constant power to the brain.

This healthy carbohydrate intake has synergistic effect with the other components of the grain: the B vitamins help the body absorb and use efficiently these carbohydrates, essential nutrient for the nervous system (buckwheat is especially rich in niacin)

Another vital nutrient for the proper functioning of the brain is lysine, an amino acid deficient in cereals.. Magnesium also has a muscle relaxant function.

Thus, in people with stress, anxiety, depression, sweet cravings, exam periods or situations with increased mental strain, we can increase these nutrients necessary for our mind and nervous system by means of substituting cereals by buckwheat.

Interestingly, in these cases we can combine buckwheat with quality nutrient sources such as potatoes (especially rich in thiamine or vitamin B1), quinoa (with all essential amino acids) and vegetables (rich in tryptophan, the precursor of serotonin) in the diet.

Buckwheat, unlike the grains and legumes, is a seed with no gluten, containing amino acids that other grains are deficient such as lysine and methionine.

In diets where many proteinic foods are restricted, such as vegetarian diets, or in diets with few sources of vegetable protein, such as in gluten-free diets, it is interesting to enrich the diet with buckwheat to complete the caloric and amino acids sources.