– Although not a cereal, buckwheat contains 70% starch in grain. Percentage exceeding even the corn in terms of carbohydrate content. It is for this reason that this pseudocereal has been very present in food and flour has been used as a thickener.

– Similar to other cereal flour, it is rich in carbohydrates, which gives it a high binding capacity, that’s to say, capable of forming a very dense mass and resistant when mixing this flour with water. This makes it ideal for preparing masses as famous noodles or soba noodles.

– Buckwheat flour stands out because is gluten-free, making it ideal for people with celiac disease who eat foods without gluten (protein found in most grains).

– Also, not being a cereal, buckwheat has the amino acids missing in cereals and legumes. For these reasons these food groups go perfectly with buckwheat grains, because it increases the biological value of their proteins.

– Carbohydrates: Buckwheat flour contains mostly carbohydrates, in the form of starch, which give it thickening properties.

– Protein: It is worth to highlight its lysine content, amino acid deficient in all cereals, and methionine, limiting amino acid in legumes.

– Fiber: Buckwheat flour is always whole. This is because, unlike grain, after the peeling, it has no outer layers that can be refined.

Soluble fiber flour predominates in this type of flour, reason why it presents slightly gelatinous texture as in the typical kashas.

– Vitamins: Mainly niacin, folic acid, pantothenic acid, and to a lesser extent, other vitamins in foods rich in carbohydrates, such as thiamine and riboflavin.

Therefore, buckwheat flour is suitable to complete the mineral content of the dishes as bechamel sauces, pastas, etc. 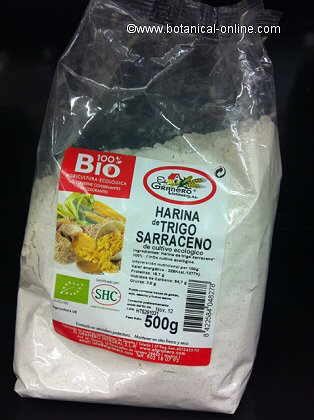 Before marketing, buckwheat grain is washed and graded according to size and thickness. Then, the grains are compressed between two wheels in order to withdraw the outer sheath without damaging the contents within the grain. Subsequently, crushed or milled grain in different thicknesses in order to obtain buckwheat flour.

Buckwheat flour is the product from the milling of common buckwheat grain (Fagopyrum esculentum Moench.)

This flour has a role in the culinary traditions of the people in Asia, Russia, and northern and eastern Europe, being the main ingredient of many bread types as part of crepes, pasta, etc..