Home › Diet › Vegetarianism properties
This article was endorsed by Elisenda Carballido - Dietitian nutritionist. Postgraduate in Phytotherapy and master in Nutrition and Metabolism.

The word vegetarian means not only a concrete way of eating, but it also means and refers to a style of life, health, ethics, a way of thinking and reasoning and an attitude, that is, a very concrete and specific moral.

What does being a vegetarian mean?

The word “vegetarian” comes from the Latin word, “vegetus” and the meaning of which refers to the freshness, the healthy and full lifestyle that it claims, teaches, shares and that one the vegetarians choose. This word was appointed in mid 1800 by the founders of a vegetarian association in the UK, called “Vegan Society”. 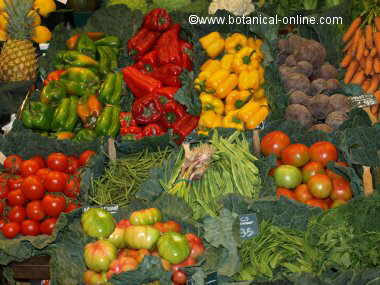 It was intended to designate and differentiate a moral and practical ethics, which when applied to all acts together, form a lifestyle. This way of life they shared and promoted, had very specific characteristics:

Being a vegetarian means more than just eating only vegetables. It means a new philosophy, a different way of living

What is the fundamental principle of vegetarianism?

The most important principle of vegetarianism is not to harm other living beings. To feed on the flesh of an animal, undoubtedly requires to kill this animal. Therefore, this action, being completely contrary to vegetarian people’s moral, exerts a significant effect on what type of food a vegetarian should admit.

Vegetarians promote food intake based on a variety of plant foods, without being processed or refined. All foods of animal origin must be eliminated, being optional those foods that derive from animals, such as eggs, milk and all its derivatives.

Vegetarian diets should also be devoid of any toxic substances such as alcohol, tobacco or other drugs that must be eliminated completely.

Wine and ferments in vegetarianism

To make wine, grapes are required to be pressed and then filtered. Wine must be fermented with a series of live ferments and, later, it must be clarified by some organisms in order to keep it clear.

Yeasts and fining ferments are of animal origin. That is the reason why some vegetarians do not drink wine. It happens the the same with beer and other fermented foods like yogurt.

Furthermore, Referring to alcohol, it is considered a stimulant, such as nicotine or caffeine,, reason why they are not usually consumed by strict vegetarians.

Many religions refer to meat as a food to be avoided, at least on certain occasions. These limitations on meat, do not occur in relation to plant food in any religion. Meat, in any religion, does not mean “life” but, on the contrary, it refers to “death”, however vegetables imply freshness and vitality.

Examples of some religions in avoiding the consumption of meat but not vegetables are: Christianity on Good Friday, Islam or Judaism, both of them prohibiting eating pork. Others also preach not to harm animals and directly promote a lifestyle and morality completely vegetarian, such as Seventh Day Adventists, Hinduism, Buddhism, etc..

Vegetarian people, whether with or without religious concerns, are against having to kill a living being. This shows their respect for life.

The ethics of vegetarianism

Vegetarian people do not consume any product that has been obtained by means of a process in which an animal could have been damaged or used in any way. Furthermore, this restriction also includes any product whose production could have soiled, contaminated or damaged Nature in some way.

Good samples of animal abuse would be, for example, the case of a brand of cosmetics that use animals to test their creams or products in general, or when testing the effectiveness of a new drug on animals. An example of damage to nature, may be, for example, the use a spray deodorant that does not respect the ozone layer, or the attitude of not recycling residues.

Vegetarian ethics considers acts of this kind harmful to the animal and never would consent them, therefore, a vegetarian does not consume products obtained in this way.

Another reason why vegetarians remove animals from their food is because animal food is considered a corpse. The thought of eating a corpse is something disgusting for them. Moreover, they say that, if we were to kill the animals ourselves to eat them, many non-vegetarians would not be able to kill them either. Most of us, will not eat them afterwards, even not being vegetarian.

Considering the flesh as the body of an animal, it is normal the way it looks, smells, tastes and even its texture generates dislike or even disgust in vegetarians. Especially when they compare it with the attributes of a fruit plate, a bowl of salad or some sautéed vegetables, which, besides being much more colorful, aromatic and tasty, are ultimately more pleasing to their senses.

– The evolution of vegetarianism to the present.

– The feelings of animals. Livestock and farm animals.

– The economy and the profitability of a vegetarian lifestyle.