Caffeine is an alkaloid, a compound containing nitrogen. It is closely related to other types of alkaloids such as theobromine or mateine.

Most alkaloids belong to the vegetable kingdom where they often have a defensive function, for example they prevent the plants to be attacked by animals.

Caffeine (with formula = C8H10N4O2) is an alkaloid that develop certain plants to ensure their survival since it is a potent pesticide and insecticide that repels or kills the insect attacks.

There are over 50 plants that contain this principle. The most important are:

– Coffee (Coffea arabiga) that contains in its seeds.

– Yoco or huarmiyoco (Paullina yoco) follows him in content. Yoco bark contains caffeine at a rate nearly as high as coffee, so it is also used as a stimulant to remove the feeling of hunger and exhaustion. The preparation is made by scraping the bark and squeezing it to extract its juice mixed with water.

– Kola, Cola (Cola acuminata) is an African tree. Caffeine is extracted from its seed. It has been used with similar properties to the plants above and even the beverage industry uses this tree. Their proportion is very similar to coffee or yoco, although caffeine form kola is released more slowly a, thus it has a more prolonged but less strong effect.

– Huito or Jagua (Genipa americana) is an American tree that contains a very high amount of this component in their seeds. Although this tree is used for its edible fruit, caffeine is not used.

– Mate, yerba mate or Paraguay tea (Ilex paraguariensis) The leaves of this shrub are rich in caffeine. From them, properly dried and roasted, the preparation known as “mate”.is done. 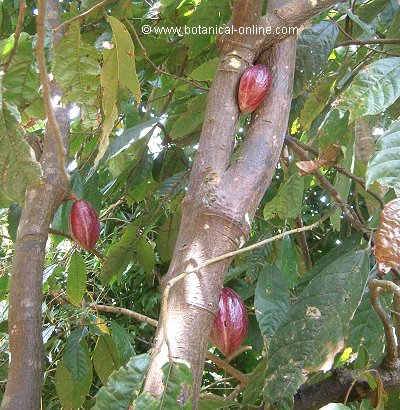 Cacao tree with fruits. Cacao contains a lot of caffeine

– Cacao tree (Theobroma cacao) The seeds of the cacao tree contain about half the caffeine as previous plants. Chocolate is a food whose ingestion produces feelings of well being in the body. This is because this food has a number of components with euphoric and stimulating properties. Among all these phenylethylamine stands out. It is a compound that actually belongs to the family of amphetamines. Besides phenylethylamine, cocoa is rich in alkaloids such as caffeine and theobromine

Plants with much smaller doses of caffeine

Most of caffeine comes from coffee decaffeination process.

Effects of caffeine on the human body

Caffeine mainly exerts stimulant and diuretic effects in the human body. Caffeine t is absorbed and goes into the bloodstream, which transports it to the brain. Once there, caffeine acts on the central nervous system producing several effects.