The bizarre appearance of this vine almost announces the many applications for phytotherapy.

Guarana is the plant with most caffeine content. It also contains many other phytochemicals such as tannins, saponins, theophylline and theobromine.

For their therapeutic effects, the seeds of guarana are used from time immemorial by peoples of the Amazon jungle, where the plant is native.

Guarana has been used there as stimulant and to treat numerous diseases.

New studies now show us the properties of this valuable seed.

Guarana, a good stimulant for the nervous system 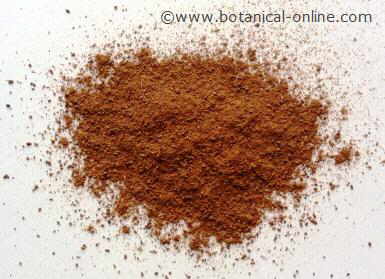 Photo of seed powder of guarana.

Guarana seeds and their derivatives, either in the form of drinks or supplements, are popularly known as natural stimulant. In effect, these seeds stand out for having the highest content of caffeine studied in plants. Guarana seeds contain between 3 and 8% of caffeine, whereas in the coffee beans this ratio is from 1 to 2%.

Caffeine or guaranine has been accepted as an active ingredient in guarana bean, although this alkaloid is not the only fully responsible for their therapeutic effects. Scientific studies suggest that the therapeutic power of guarana is due to its high content of tannins, saponins and flavonol present in seeds, together with the action of alkaloids such as caffeine, theophylline or theobromine, all of them natural stimulants of the nervous system.

Specifically, it is believed that caffeine or guaranine forms a complex with the tannins, which influences its absorption and effect.

These components delay the absorption of caffeine getting a less “sharp” effect than the caffeine in coffee but more durable and stimulating. Unlike coffee, guarana does not cause nervousness but acts as uplifting in the body and mind.

When caffeine is absorbed, it travels through the bloodstream to the brain where it exerts its function. Caffeine binds to a type of brain receptors called adenosines, leading to increased mental alertness, wakefulness and promote better association of ideas and greater resistance to fatigue.

The stimulant effect of guarana is produced within 45 minutes after ingestion and can last 4 to 6 hours.

Has guarana caffeine a toxic effect?

It is a supplement that has no toxic effects, but may cause side effects depending on the degree of individual tolerance to caffeine.

As a matter of fact, the effects of guarana have been criticized for its high caffeine content of the seed, about 4g per 100g. However, we must take into account that with a guarana 1 g capsule we ingest 40mg caffeine; half the amount of a cup of coffee, which is about 80mg caffeine content.

It is a brain tonic that stimulates, motivates and cheers. It counteracts reluctance, couldn’t-care-less attitude and inhibition. It is indicated in cases of nervous fatigue, depression, physical and mental exhaustion or for people under stress.

This effect is closely related to the content of caffeine in guarana, rather than in its other phytochemicals. Caffeine is a known substance that acts on the brain and its effects are noticeable, for example, when we consume a cup of coffee.

Scientific studies are emphatic in asserting greater cerebral performance when caffeine is given to people who have been deprived of sleep. Therefore, guarana supplements can be used in times of exams, for seniors, or to improve learning abilities in general.

In addition, recent epidemiological studies in some population groups have linked high consumption of drinks with caffeine, such as coffee or guarana drinks, with lower future risk of neurodegenerative diseases like Parkinson’s disease.

In 2006 the first human study on the effects of guarana seed extract was performed at the University of Northumbria, England. In the study, guarana supplements were administered in different doses from 37mg to 300mg daily.

The research also shows that lower doses (75mg) have more positive effects than higher doses of guarana (300mg daily). Further successful experiments were performed to demonstrate the qualities of guarana to enhance memory.

Antioxidant and anti-aging properties of Guarana

The antioxidant effects of guarana have been demonstrated. The are due to its richness in polyphenolic substances (mainly tannins). These antioxidant compounds protect and exert as an anti-aging of all body tissues.

Specifically, guarana fat acts as an antioxidant. Fats are a component known for its accumulation or excess in the body, known as overweight or obesity, but one should not forget that they are also a nutrient and a component present in the wall of every cell in our body, and especially, most of our brain consists of fat.

Scientific studies have shown that guarana supplements prevent oxidation of body fat, demonstrating the antioxidant effect of guarana. This effect, according to the authors, may be related to the high concentration of tannins in the fruit.

Dr. Aslan, a reference in research and the study of aging, referring to the medicinal properties of guarana, said: “you have, naturally, one of the most powerful fountains of youth you know”, addressing the Brazilian Congress in 1982. This doctor was known for his studies of rejuvenating foods. Later, she patented Gerovital, a famous anti-aging medicine. 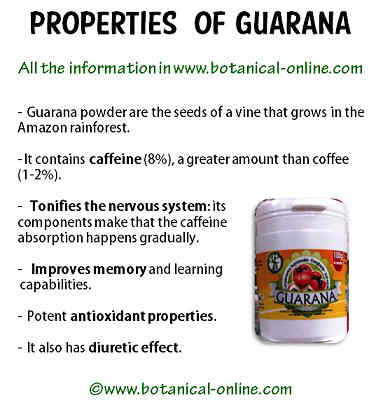 Guarana keeps arteries elastic and healthy, due to its antioxidant content. It has also been observed that guarana supplementation prevents the formation of inflammatory substances and blood clotting in both, in vitro and in vivo. Thus, guarana has proven useful in preventing cardiovascular disease.

However, Guarana is not recommended for people who already have suffered heart attacks or taking medication for some type of vascular disorder. In these cases one should always consult with a professional to take guarana under medical supervision.

Due to the high tannin content, especially catechol, the plant has been recommended in cases of diarrhea and leucorrhoea.

It also posses antimicrobial properties, so that, guarana has also been used since antiquity to treat gastrointestinal infections such as enterocolitis and dysentery.

Some investigators of the natural remedies of the Amazon people suggest that guarana is also used to cure bloating. In homeopathic medicine, guarana is used to treat people with hemorrhoids.

Scientific studies have concluded guarana is beneficial to suppress appetite. This quality is interesting for people who are on a low fat diet, or people with food cravings.

Some Amazonian tribes eat a paste of crushed guarana seeds to help them achieve fasting, due to its anorectic values.

Guarana has been proposed as a revitalizing energy.

Being rich in caffeine, theophylline and theobromine, guarana has bronchodilatory properties. These alkaloids, and especially theophylline, cause relaxation of bronchial smooth muscle, Guarana extract can improve asthmatic conditions.

Guarana as an analgesic

Amazonian peoples traditionally used guarana extract to prepare analgesic remedies, used for headaches, arthritis, muscle pain and dysmenorrhea. In these regions, the infusion of guarana is an effective remedy for the treatment of malarial fever.

Some pain medications include caffeine as an ingredient, such as Actron ®, a headache medicine containing aspirin, paracetamol and caffeine.

Guarana seeds are rich in tannins. Tannins are substances present in many plants, which are known to present antioxidant and protective properties for cells.

The Faculty of Veterinary Medicine, at the University of São Paulo (Brazil), has observed in a study that guarana acts as a protective factor for DNA (genetic code) of cells that have been damaged.

The external use of a poultice with crushed guarana seeds is indicated to regenerate damaged tissue (wound cicatrization).

In therapeutic doses, guarana is a mild diuretic. The Amazonian people use guarana as a remedy for the retention of body fluids. In high doses, however, it causes urinary tract irritation. The substances responsible for the increase in diuresis are the alkaloids caffeine, theobromine and theophylline, which must be eliminated in the urine.

It should be noted that, to combat fluid retention, other herbal remedies have been reported to be more effective than guarana.

The ABC School of Medicine of Sao Paulo (Brazil) noted the effects of guarana supplementation in patients with breast cancer with chemotherapy.

The study found that guarana is an effective, inexpensive and nontoxic aid for the short-term treatment of fatigue in these patients.

However, another study contradicts it, so that, more and more precise studies are needed to determine which factor influences this alleged improvement (diet for cancer care, type of supplement, etc..).

Beneficial effects of guarana in sport are due to the high caffeine content of the seed. Caffeine is a natural stimulant of the whole organism. In particular, it is also a tonic for the heart muscle.

Another course of action is because caffeine prevents the buildup of lactic acid in muscles, thereby improving recovery in sport and preventing stiffness.

Among athletes, guarana is also known for its property to “burn fat”. Scientific studies confirm that guarana, contains methylxanthines, that stimulate the nervous system, causing the release of adrenaline and stimulating fat metabolism.

– Learn about all the benefits of guarana in sport.

Guarana is widely known in the business of thinning because it is an ingredient of creams, teas, capsules and other supplements for losing weight.

Ma Huang (Ephedra sinica) and guarana have proved especially effective supplements, due to the potentiating effects between ephedra alkaloids (ephedrine) and guarana alkaloids (guaranine or caffeine).

Guarana appears to be a good supplement for weight loss, for its stimulating effects that help fight stress that often occurs in people who want to lose weight. It has also been observed that people who take guarana supplements have a better mood, improve their memory and their cognitive abilities.

– Learn about all the benefits of guarana for weight loss.